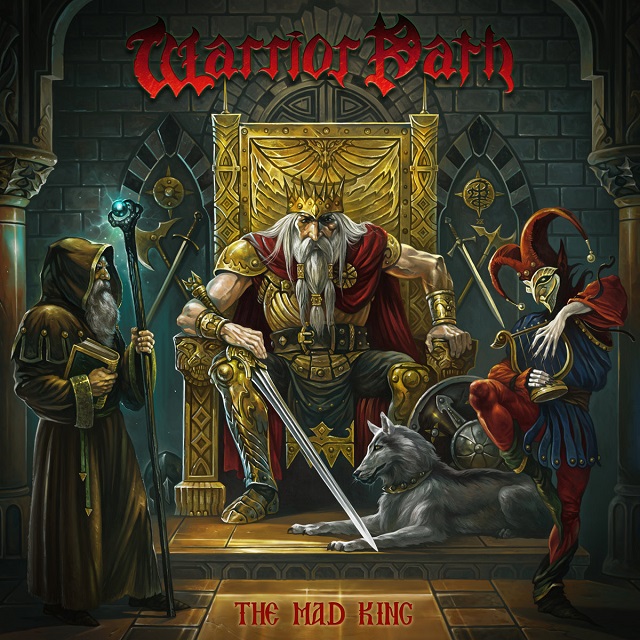 The sophomore effort from this Greek power/traditional metal outfit heralds the return of vocalist Daniel Heiman (best known for his time in Lost Horizon), alongside Firewind veteran Bob Katsionis (lead guitar/bass/keys). Something of a concept album, relating the tale of the titular sovereign, the music is quite regal and anthemic, embracing neither speed, nor heaviness, yet decidedly metal. No mean feat. The one criticism is that each of the nine proper tracks (opening 2:51 "It Has Begun" is devoid of lyrics) has a length "introduction," be it spoken word or, more often, atmospheric music, seemingly detached from the song itself. Witness the title cut (up second), as close to a speeding thumper as it gets. Coming on the heels of nearly three minutes of mood setting music, does it need a second/additional piece? Why not just jump right into it?

Slow, haunting boom of tympani begins "His Wrath Will Fall', then the riffing guitars appear. Feels like Warrior Path set out to make something grandiose (to rival the scale of Trans-Siberian Orchestra), rather than a spanking metal platter. Shame, as they've not achieved THAT lofty goal, but the latter is (still) almost within their grasp, warts and all. The saving grace is Heiman's voice, adroitly accented by a higher register. Most prominently on display during "Beast Of Hate", he also employs deeper (but not guttural) intonations, albeit briefly. Light, airy passage greets "Don't Fear The Unknown", including acoustic strings that recall a medieval madrigal, before a power chord strikes, sending everything into a mid-tempo, fist shaking Dio vibe (ala "We Rock"). The latter half blazes away! Call to battle, as a war trumpet bellows forth on "Savage Tribe". The drums clickety-clack in railway precision as Heiman's sustained vocal gymnastics abound, apart from a subdued, minimalistic midsection (lightly strummed acoustic).

Speaking of high notes, once the narration passes, the military cadence of "Avenger" unleashes Heiman's potent lungs. In its final third, the tempo rises, but never as significantly as these vocal highs typically accompany. After an opening salvo, "Out Of The Shadows" hints that it will be the all-out speeder this disc so desperately cries out for, yet lacks. Tis but a false warning, settling back to a lilting mid-to-elevated pace, within which they're most comfortable residing. "Neverending Fight" is an uplifting anthem: "Never stop chasing your dreams. It's harder than it seems..." Fleet fingered solo, courtesy of Katsionis, plus an acoustic rondo end, with Heiman, nearly a cappella. By contrast, at times the closing "Last Tale" reminds me of Crimson Glory, which is not a bad thing.

Pleasant discovery. Hope this is more than a pandemic, one-off, as it's deserving of greater output!