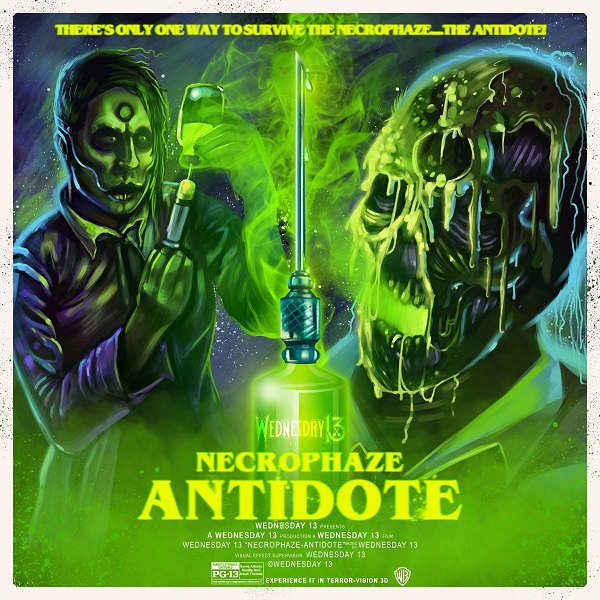 Necrophaze, the eighth studio album from Wednesday 13, was released in 2019. Now, the Duke of Spook serves up a digital only, four song EP, Necrophaze – Antidote. The first two songs are newly recorded offerings of songs from Wednesday’s first band, Frankenstein Drag Queens From Planet 13. “Your Mother Sucks Cocks In Hell” was one of five new tracks that appeared on the 2004 FDQ compilation 6 Years, 6 Feet Under The Influence. This fan favourite has become increasingly difficult to find – problem solved with “Your Mother Still Sucks Cocks In Hell”. Of course, the song takes its title from the ‘70s horror classic, The Exorcist. The 2021 version is slightly longer, and begins with a brief drum intro, not present on the original. Most notably, the piano is missing, as are the funny comments at the end. However, the rough and raw punk attitude is still very much intact. “Screwdriver 2 – The Return” is the sequel to “Screwdriver” from Night Of The Living Drag Queens, originally released in 1998. Again, the new version is a tad longer, and the introductory audio sample is gone. The toy ray-gun sounds have been replaced by a guitar solo, and the lyrics have been updated with new verses; the chorus remains the same. One last difference, the ending of the song is more drawn out, as opposed to the initial abrupt stop.

Acting as side B, are a pair of previously released cover songs. In November 2020, W13 issued a dark and sinister take on one of the biggest pop songs of the late ‘80s – “Devil Inside” by Inxs. A year earlier, in November 2019, Wednesday, along with the assistance of Alice Cooper’s daughter, Calico Cooper (both of whom appear on Necrophaze), put his spin on Gary Numan’s “Films”. Your enjoyment, or lack thereof, of this particular track depends entirely on how much you liked the synth heavy original. While Necrophaze – Antidote doesn’t offer anything brand new, it does serve as a welcome stop-gap until Wednesday 13’s next blood-drenched full-length.