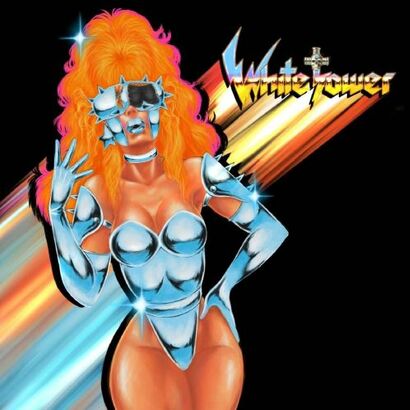 Raw, high energy Teutonic inspired metal, this is the full length debut from a Greek outfit formed just last year. What's in that ouzo? Amazing! Essentially a missing link in the early 80s Accept discography, pre-Restless & Wild, down to the raspy, squealing Udo doppelganger in vocalist Gago Karapetian. As a metalhead, if that's not enough to sent you scurrying off to scouring the Net, I doubt what follows will be any more persuasive, just a confirmation of said characterization.

Band be new/different and exciting. However, "new/different" is rarely exciting and often requires wandering far afield of the grounding metal tenets. Just as quickly, those bright lights are quickly extinguished. For every commercial success of Jane's Addiction, Warrior Soul and/or Faith No More, there's a Cold Lake, Load and Lulu: disastrous, career-ends, saved only by the strength of their earlier catalog. Younger bands don't have that built-in, safety net. White Tower ARE exciting, offering a variation on a theme and thereby recapturing a time/sound that their generation may have missed, but still appeals to many.

"Lions Of Steel" opens with a guitar intro (and lion's roar), reminiscent of Judas Priest, but once Gago opens his mouth, unleashing nearly imperceptible English lyrics, the compass point swings towards Deutschland. The staccato, clickety-clack riffing lays down a headbanging rhythm and love affair is on. More of a mid-tempo gallop, "Leather Empress" is a showcase for the singer's guttural growl and some whammy bar action. Wailing sirens and gritty guitar tone greets "I Rule The Midnight", a slow, almost AC/DC, crawl, with backing gang vocals on the titular chorus: a one-off stylistic choice. Back to guitars out front, leading into "Spread The Fire". Can practically envision the onstage six-stringers swaying back & forth, with an occasional skyward point of the headstock, just like their mentors.

Rising the temperature (and intensity) once again, "Curse Of The Night" should have a Wolf Hoffman/Udo Dirkschneider writing credit. It ends with gravelly shriek. If Metal Heart era is more to your liking, check out the smoother "Runaway Rebel". More riffs on "Fuel Along Gunfire", the least convincing of the ten selections. Thankfully, it's only 2:43, which speaks to its undercooked nature. No such issues with "(Find A Way) To Rock" a veritable Accept classic, through & through. Follow-up "Soldiers Of Metal" doesn't mess with success (apart from the return of those chorus shouted gang vocals), even affording a brief guitar solo. Disc closing "Rough Sex" might be a little out-of-favor in 2022, but it's another paean to Angus Young and the the Aussies.

Unlikely to make it to these shores any time soon, but certainly worthy of inclusion in any traditional metal fan's collection. Highly recommended.