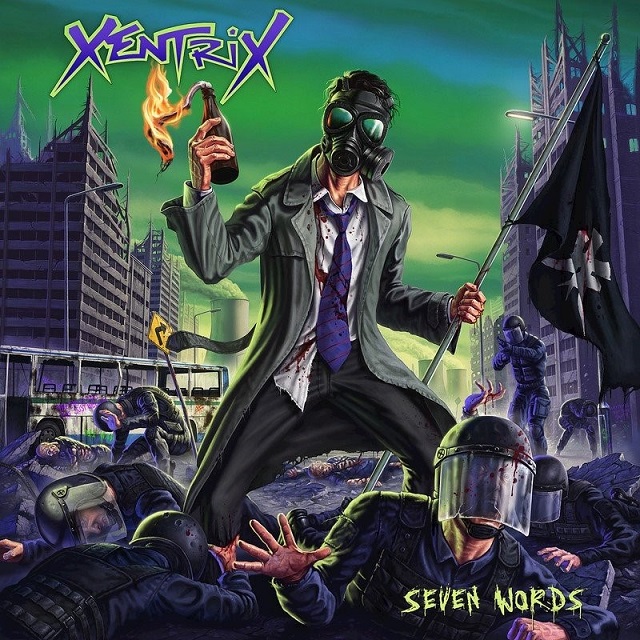 Sure, 2022 was rocked by releases from Kreator, Destruction, and Megadeth, but there were some impressive releases from longtime thrash acts that were just as scintillating. Toxik’s Dis Morta was a technical whirlwind and from the U.K. is good ol’ Xentrix, capitalizing on their 2019 comeback effort, Bury Then Pain. The mysteriously titled Seven Words is superb thrash metal that doesn’t get tricky – it leaves and breathes by the riffs/songwriting.

Andy Sneap helms the production job as the guitars are allowed to breathe with a heavy crunch and clear melodic lines while the bass shines with a cohesive thump. Also love the creative drumming from Dennis Gasser. Singer/guitarist Jay Walsh, who joined for 2019’s Bury The Pain carries the load with angry, pissed off vocals and yes, he sounds similar to original frontman Chris Astley, but that’s how you know that it’s Xentrix. Like the war cry in the most pit induced title track. The album excels and the mid-paced stompers – allowing the guitars to leave a mark and for Jay to do his thing vocally. There are influences of Bay Area thrash and NWOBHM involved in Xentrix as the guitar duo of Kristian Havard and Jay add in guitar harmonies to contrast the aggressive rhythms.

It’s textbook, well-written thrash with a tons of replay value. “Everybody Loves You When You’re Dead” is a snarly stomper and might the album’s most “accessible” track and closer “Anything But The Truth” brings an epic atmosphere, but closes at a tight 5 minutes. What Seven Words gets so right is that it doesn’t get too technical, doesn’t get too experimental, or has mind-boggling musical decisions. This is thrash done right and feels like it could have been released right in 1989-1991. Don’t sleep on this band or album.