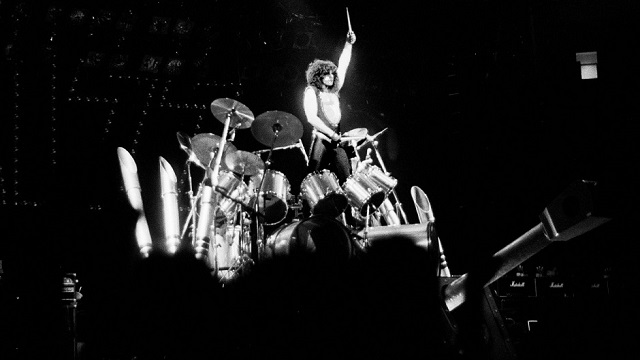 During the early ‘80s, two rock drummers did a masterful job of replicating the enormity of John Bonham’s drum sound—Bobby Chouinard on Billy Squier’s Don’t Say No, and most definitely, Eric Carr on KISS’ Creatures Of The Night.

Coming off of a string of albums that saw the then-still masked quartet moving further and further away from their earlier hard n’ heavy sound, KISS (which at that stage was comprised of Paul Stanley, Gene Simmons, Ace Frehley, and Eric Carr…although Frehley was preparing to exit) wisely decided to get back to basics on Creatures Of The Night—their tenth studio effort. 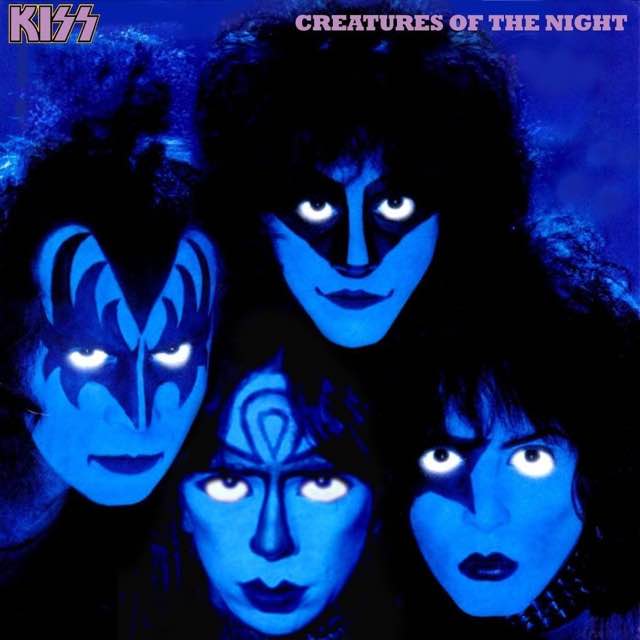 The second KISS album that Carr appeared on (after replacing original drummer Peter Criss), Creatures was released on October 10, 1982. And while it has rightfully gone on to be mentioned in the same breath as Alive!, Destroyer, and Rock And Roll Over as one of KISS’ all-time best—and certainly most focused and inspired—offerings, the album underperformed chart and sales-wise, resulting in the band ditching the make-up (and unfortunately, also Carr’s thunderous drum sound) a year later.

July 12, 2020 would have been Eric’s 70th birthday (he sadly passed away on November 24, 1991, after a battle with cancer), and to mark this occasion, below is an excerpt from an earlier book of mine, The Eric Carr Story (available for purchase as a paperback version or a Kindle download here) which focuses on the recording of Creatures, how Carr obtained his famous drum sound, and what several renowned metal drummers thought of the album and drumming. 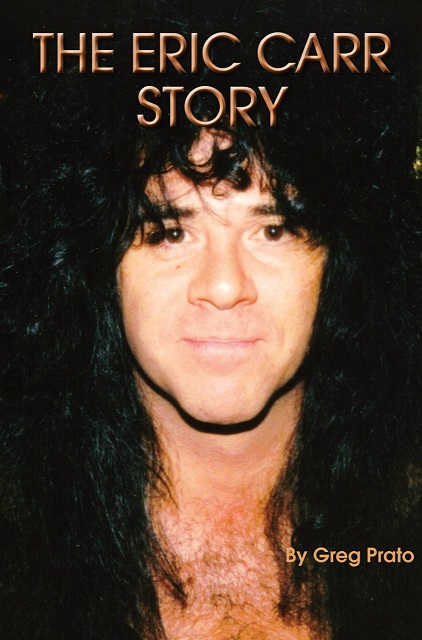 Michael James Jackson (Creatures Of The Night and Lick It Up producer):  “We ran two studios at the same time, in the same building, and we’d go back and forth between the two of them. We put Eric in a separate room by himself. There was a big focus on trying to get as close as possible ... not to the exact sound of John Bonham, but we tried to get some of the character of Bonham’s sound. You can’t ever duplicate what anybody else has done, because it’s not just the echo, it’s not just the environment, it’s not the ambience—it’s also the sound of the drums, the way they’re hit. There’s so many factors involved, [like] the humidity in the room. All those factors are involved in what the overall ambience is and sound is. But there was a real determination to try and create a sound that really had a character to it that was along those same lines. So Eric was put in a separate room—not even a booth [but] a separate room—and was close-mic’d and distant-mic’d. We had spent a lot of time—we might have spent a couple days—trying to really work and find the sound, specifically around the drums. Because on that record, the drums have a character to them. That is what gives that record an identity. Eric was way into it, because it was his ‘glory moment.’ It was when all the focus was on Eric. He was willing to do whatever it took to achieve that particular thing, and also, was very focused on his playing. I always appreciated that he really cared about exactly what he did and how he was going to sound. And then later, that record was mixed by Bob Clearmountain. It was made very clear to Bob that the particular overall character of the drum sound was a key element in the record. So when he mixed it, he added some of the echo that the Power Station became very famous for. There was an elevator shaft there that he had put a microphone down. He could send the signal into the elevator shaft, which would resonate, and the mic would bring that back. So some of that is also mixed into the drum sound on Creatures. Clearmountain did a great job, because one of the hallmarks of Clearmountain in those days was he had the unique ability to get more low end onto a record that would translate over the radio. A lot of engineers can put it on a record, but you never hear it on the radio. Bob had a methodology where he could really sculpt that in, in a way that if the record got played on the radio, you could hear that low-end character very clearly.”

Loretta Caravello (Eric’s youngest sister):  “That was his favorite album. I think he said ‘Saint And Sinner’ was his favorite song to play. From what I heard, the drums were recorded in an elevator shaft. And they never were able to duplicate that sound again. They tried and tried, and he tried and tried, but no one has been able to duplicate that sound. It just hit it right. It’s like the weather, when you see the ice on the trees, it has to be perfect and the same, and it never is again. He was very proud of the album.”

Michael James Jackson:  “The feel of the album and the character of the sound was built around Eric’s drums. So I’d have to say his drums certainly played a significant role. But the other thing that I’d say about Eric in relationship to that was since he was the ‘new kid on the block’—even though he’d been with the band for a while—he still was not [a member of] the original band. But Eric had a deep love of KISS and a deep love of KISS’ persona and what the concept of KISS was. So Eric at times was very vocal about wanting to be ensured that KISS was going to be KISS. And that was all about the sound and trying to translate some of that ‘alive-ness’ on disc.” 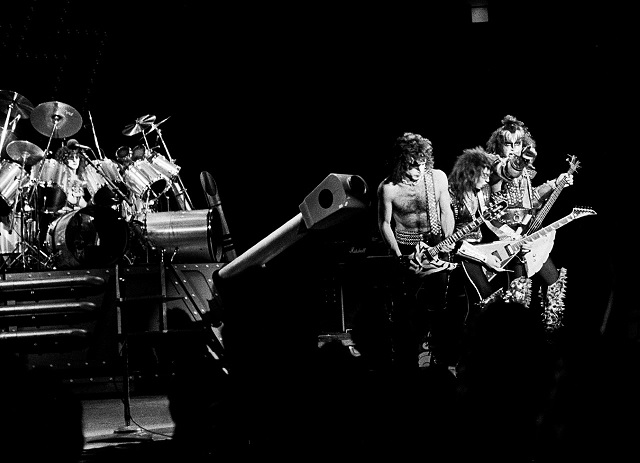 Bruce Kulick (KISS guitarist 1984-1996):  “There was a time when, for some reason, I was able to stop by the studio when they were doing Creatures, and that was the first time I saw Eric. I love that they were working on ‘I Love It Loud.’ They were checking the mix. You know, the mix at the end when the song fades out and then comes back in. I thought Creatures of the Night was a brilliant KISS album, because it has such a huge Zeppelin-ish/metal sound to it. I was really impressed with that. And I’m sure that was their reaction to The Elder. And there was Eric on the couch. His hair was huge. I only knew of him—that he was the new drummer—but I didn’t know him. So I felt like from his own personal insecurities, he put up a bit of a wall with me. Of which, getting to know him in the latter years, I totally understood. So at the time, I thought that he was kind of ‘guarded,’ and I didn’t get a chance to really say, ‘I really got to experience Eric.’ It was more like, ‘What are you doing here, tall guitar player dude? Invading our space here?’ But I kept it kind of neutral in my mind, what I thought of him. But I will say I was like, ‘Hmm, is he playing the rock star, or is he just uncomfortable meeting people socially?’ And Gene was always all Gene. I don’t even remember how I wound up there, but that was obviously exciting for me. And ‘I Love It Loud’ sounded amazing!”

Michael James Jackson:  “‘I Love It Loud’ is really Gene’s persona. It was very ‘KISS-like’ in the sense that it was very much the persona that Gene puts forward. ‘I Still Love You’ was a big favorite of Paul’s. A lot of time was put into trying to really make that be something. Even ‘Creatures.’ A lot of effort went into trying to make these records be a step above the norm.”

Eddie Trunk (Radio DJ and TV host):  “Getting Creatures, it was eye-opening. It was just monstrous. One of the heaviest albums KISS has ever done, and one of the reasons for it, not only the material, but obviously, the drums. The drums are monstrous-sounding. I never heard drums booming like that on a KISS record before or played like that on a KISS record. It all came together—the material, Eric finally being Eric and getting to be what he signed on to be coming to that band. And KISS being a heavier band than they’d ever been. The irony of all of this, of course, is that you had Ace Frehley out the door.”

Charlie Benante (Anthrax drummer):  “I think Eric was a big Led Zeppelin fan, and he was always into the whole ‘John Bonham thing.’ He played Ludwig, as well. I just think he captured what he wanted to on that record. The drums sound so big and large. If you listen to the fourth side of Alive II, the drum sounds on that record were great. They had some big tones on that record. And I think on Creatures of the Night, they captured that sound as well. It just fit the songs. So I thought that was a great KISS record.” 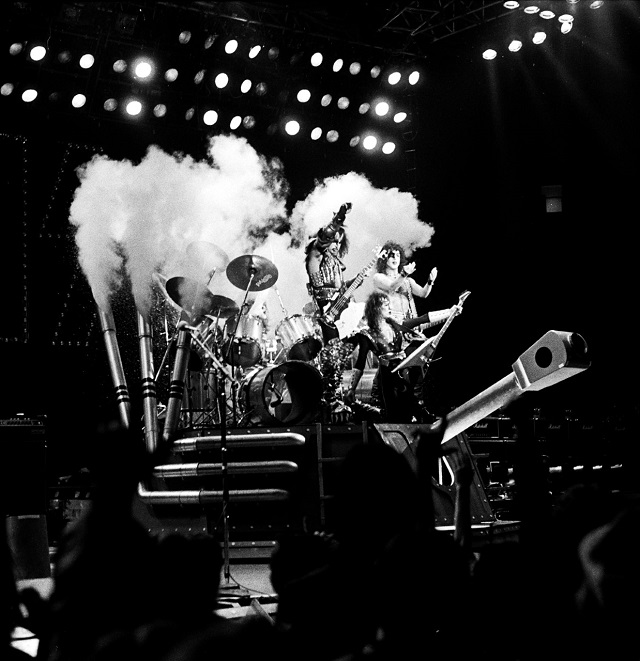 Mike Portnoy (original Dream Theater drummer):  “Creatures Of The Night is an amazing album. It’s got some great drumming on there. He was a double bass player for starters, which Peter was not. And in the early ‘80s, there were very few double bass players. At that point in the ‘80s, I had only been really listening to ... maybe Mötley Crüe was just coming around, but there were very few double bass guys I was listening to, and Eric was one of them. And that’s one of the things that made his drumming stand out different form Peter’s. And the Creatures album has some great double bass drumming and some real aggressive type of stuff that made the drumming stand out.”

AJ Pero (Twisted Sister drummer):  “Twisted Sister just did a show in France, and I did an interview with the French affiliate for Modern Drummer. I was one of his mentors, and we went through different phases, and Eric Carr’s name was brought up. I said he was a great drummer. Like me, we were really able to show what we were all about. I said one of my favorite albums to this day is Creatures Of The Night. The way the drums sound and the way he played, you can just feel that power coming off it.”

Bill Aucoin (KISS manager 1973-1982):  “(Creatures Of The Night) was a very good album, and I do think Eric was great on it. At that point, he really had learned so much and had experienced so much, that he was coming into his own. He was really becoming a great drummer. I think that’s the reason. He really was a spectacular drummer, and he just got better and better.”