Securing a recording contract and issuing a debut album by the band you’re a member of would satisfy most musicians. But this proved not to be the case for Michael Schenker, during his first go-round with the Scorpions. While touring in support of the Scorpions’ debut, 1972’s Lonesome Crow, the German band toured together with UFO. When UFO’s guitarist, Mick Bolton, exited the group, young Michael (who was only 17 years old at the time) was offered to do double-duty and fill-in for Bolton…which eventually led to an offer to join UFO full-time. In a book of mine, German Metal Machine: Scorpions in the ‘70s, both Michael and his Scorps replacement, Uli Jon Roth, recall how this old switcheroo took place. And if you enjoy what you read, you’re in luck - the book is still indeed available for purchase as a paperback version or a Kindle download here.

Michael Schenker (Scorpions guitarist (1969- 1973 & 1978-1979)): “But I always told the Scorpions before, ‘If an English band would ever ask me to join them, I would - at any time.’ So I kind of let them know very clearly well ahead of time. Basically, that was it. So when we were touring together with UFO and they left their guitarist at home or they lost their guitarist [Mick Bolton], I had to do two shows with UFO in order to continue the tour. So I played with the Scorpions for 45 minutes and with UFO the whole set, which we put together just before the concert. And then after the tour, UFO asked me to join. There's a couple of reasons why it was important for me to join an English band - because I wanted to be with the music that I fell in love with came from. And that was England. Where people could understand what I was doing. In Germany, nobody understood what I was doing. They were all listening to disco music. There was nothing going on there. I was so fascinated with music and how I was developing, for me that was a natural step. So when they asked me, it could have been anybody. But it was UFO, and I joined - just to be in England. It kind of did [put a strain on Michael's relationship with Rudolf]. Basically, this whole life that we had been living, I personally believe the script was already written, and we are living the movie. There are too many incredible situations that happened, that could have not been coincidence. Before I joined UFO, I was looking for a replacement [for the Scorpions], and I remember seeing this guy when I was fourteen - which was Uli Jon Roth. I knew that he would be a good replacement for me. So I didn't leave them sitting there empty-handed. I put Uli there.”

“Another thing, very important, was that I was six/seven years younger than everybody, and I was kind of ‘the little boy’ - always tracking behind everybody. The big boys and the little guy. Seven years older, all of them...the same thing happened in UFO, by the way, but eventually, I snapped out of all of this in 1980, when I formed my own band [The Michael Schenker Group, aka ‘MSG’] - then I didn't have to be the little boy anymore, I was on my own, doing my own thing, and following my own vision.  So basically, Rudolf had always had the vision to become famous and successful, and having a band that becomes one of the most successful bands in the world. That was his vision and fascination to accomplish that. And every time something would break up his expectation, he - like every normal person - would feel like shit. ‘My plan is being jeopardized.’ But I have my own vision, and that's maybe what Rudolf never understood - I wanted to develop as a guitarist, and that is a complete different platform. So, I had to make my own moves, and I have my own idea of how I want to go through life. So if he had expectations of using me to his way to success, then that was his thing, his expectation - that subjected him to disappointment, of course. But anyway, I made sure that I found a perfect replacement.”

“And the reason why I'm saying ‘perfect,’ if I'm looking back now, I had no idea that all I was doing was having a look around, and I find Uli, who is exactly the same horoscope as me - he's a wooden horse. I was born in '55, he was born in '54, but from the Chinese horoscope, he was from the same year of the horse. Which is, again, a coincidence - the exact opposite of what Rudolf and Klaus are. They are both rats [via the Chinese horoscope], and this is exactly the opposite. So you get a very good, creative spectrum. It has the whole spectrum - what the horse has a lot of, the rat has a little, and what the rat has a lot of, the horse has a little. You have an incredible spectrum of creativity, which by the way, I told Doogie [White, the singer in Schenker's Temple of Rock], and he said, ‘Michael, you won't believe it - I'm a rat, too!’ [Laughs] So it seems like I'm doing well with rats on the creative level.” 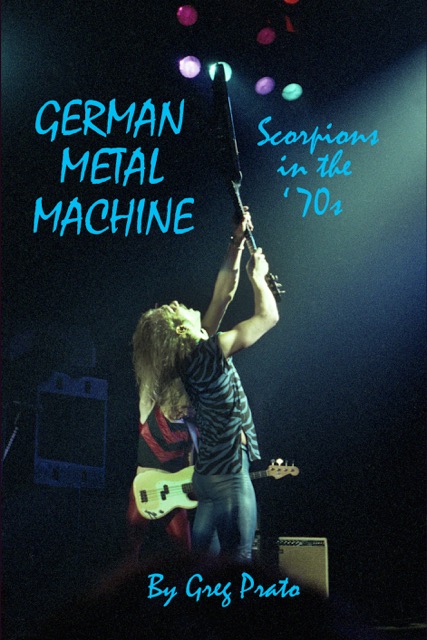 Uli Jon Roth (Scorpions guitarist (1973-1978)): “I knew the Scorpions since at least 1971, when they were basically a band playing covers in the same places that everybody played. That was even with the guitar player that was before Michael [two guitarists preceded Michael in the Scorpions - first Karl-Heinz Vollmer, then Ulrich Worobiec]. And I also knew Rudolf back then - we spoke maybe a couple of times. But I had a closer relationship with Michael Schenker, in the sense that we felt we were on the similar...I don't know, there was a similar ‘frequency’ between us. And there was a strong mutual respect from the get-go. While Michael was in the band, they were touring with UFO. They were supporting UFO in Germany. After the tour or during the tour, UFO basically asked him to come and join their band. I didn't know any of that at that time. It was some time in 1973 - in the first part of 1973. I remember getting a phone call from Michael's then-girlfriend (Gabby) - she was always there, so she kind of spoke for him sometimes. She said, ‘Michael would really like to talk to you about something important. Can you come to the town and talk about it?’ So I said, ‘OK.’”

“We met maybe that evening, and we sat in my car. I had just gotten my license and it was my first car - I remember him sitting in the front seat together with me, and her in the backseat. And then he basically asked me whether I would be interested in doing an album with the Scorpions, because he wanted to leave the band. He didn't tell me anything about UFO. I guess it was supposed to be a secret. He said that maybe he wants to go to India to meditate or something like that. Which wasn't too far-fetched, because his dad - a very interesting man who I also got to know, Bernard, and he was very influential towards Michael and Rudolf - was a devotee of [Paramahansa] Yogananda. So they grew up with this Yoga thinking. So, it didn't surprise me. But I remember that my answer was that I wasn't really so interested at that time, because in my mind, it was a time when I wasn't really interested in rock music - I spent most of my spare time studying the classical guitar, and I played very little electric. When I played, it was with my band, Dawn Road, which was more like a weekend thing. I don't remember exactly what I said, but I think I said, ‘Well, maybe that's not for me’ - or something like that. And then we left it at that. Obviously, what he had in mind was he was feeling a little guilty - or maybe very guilty - of leaving his brother in the lurch and the whole band, and he wanted to find a successor. That's why he called me.”

“Now, a little while after that, I got a phone call from Rudolf, and he said, ‘Well, you know that Michael left, and we still have a show to play. Michael left for UFO.’ At that time, I didn't even know who UFO was, because I wasn't really knowledgeable in rock circles, because I was mainly interested in classical music. He said, ‘There is one show booked at a festival in Germany. Could you please come and help us out and take Michael's place?’ So I said yes, because at that time, I did lots of jam sessions with quite a few of the bands in Hanover, so I didn't think much of it at the time. He sent me a cassette tape with some of the songs, which I learned - they were mainly songs from the Lonesome Crow album, such as ‘I'm Going Mad’ and others. So I learned the songs, and a couple of days later, we had one rehearsal, and the rehearsal was very odd, because by now, after Michael had left the band, the entire band was in disarray and they had effectively, disbanded. There was no more Scorpions. They had one show to play, and that was it - they were all fed up with the situation, and they couldn't see any future. Except for Rudolf.”

“So we had this one rehearsal and it consisted solely of Rudolf, myself, and the then-drummer, Helmut Eisenhut - ‘iron hat’ is basically the translation. He died, unfortunately, sometime after that. But that was the drummer, and Rudolf and myself - there was no bass player, there was no Klaus. We did this rehearsal, and then we played the show, and the show was a great success. The show had Klaus on vocals, Lothar Heimberg on bass - who was a great bass player. It was a great success, and I really enjoyed it. I could feel some kind of bond between Rudolf and myself - I felt there was something there. It felt strong. But after that show, there was no more Scorpions. Rudolf felt that he needed some time away from it all to regroup - which he did, for maybe a couple of months or so. And then, he started showing up at Dawn Road's rehearsals - at a hall in a school [Robert-Koch-Realschule in Langenhagen]. Then he started sitting in with our band. We were a four-piece band, we also had a keyboard player [Achim Kirschning], who then later on turned headmaster in that same school. Somehow, then, Rudolf and we joined forces, and we said, ‘OK, let's do the band.’”