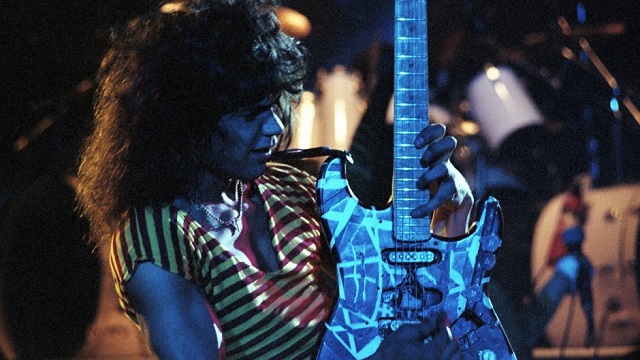 In 2017, I released my 21st book overall, Shredders: The Oral History of Speed Guitar (and More), which of course, prominently featured the great Eddie Van Halen…both on the front cover (a classic shot from ’78), as well as an entire chapter solely about him. Entitled simply ‘Eddie,’ the chapter featured quite a few memorable quotes from some of the top names of modern day rock and metal guitar. Below is an excerpt…which sadly, now serves as a fitting tribute for the late/legendary guitarist.

STEVE VAI (Frank Zappa, Alcatrazz, David Lee Roth, Whitesnake guitarist; solo artist): "When I look back at it, there’s really a few guitar players that just came and created a paradigm shift on the instrument. And in my life, it was Jimi Hendrix and Edward Van Halen. I was in college when I heard Edward, and it was a revelation. He had definitely raised the bar with innovation and sound and tone—that was unprecedented at the time. And it was a form of ‘shredding,’ so to speak."

JOE SATRIANI (Chickenfoot guitarist, solo artist): "The first time I heard him, I thought, ‘That’s exactly what I want to be doing. And that sounds like what I’ve been doing with my friends for a couple of years, but no one let us do it.’ (Laughs) I was so happy when the world accepted Van Halen’s guitar sound as a new paradigm."

STEVE STEVENS (Billy Idol, Michael Jackson, Vince Neil, Bozzio Levin Stevens guitarist; solo artist): "I was at a raging party the first time someone put on the first Van Halen record. And it got to ‘Eruption,’ and I literally ran across the room—this is the days of turntables—lifted up the needle and put it back on, and asked the person whose party it was, ‘Who the fuck is this?!’ Eddie was a total, complete assault. Not only technically, but the sound of his guitar was astounding at that point. It’s funny, because the band that I was in before Billy Idol, we were called The Fine Malibus, and I was in a loft on 30th Street in Manhattan with them, and I had access to all the best ‘amp tweakers’ at that time, and I had kind of run a parallel path of wanting to use original, old Plexi Marshalls and doctoring the amps. I had an ‘amp guru’ named Henry Yee, and we came upon very similar thoughts about guitar sounds. And as I learned what Ed was doing, there was a lot of similarities. I just thought, ‘This guy really nailed it—exactly what I thought rock guitar should sound like.’"

K.K. DOWNING (Judas Priest guitarist): "Extremely influential. Guitar players come along every now and again and set the benchmark—and I think Eddie did that. Actually, I’m in my office now, and I’ve got a really great picture of me and Eddie— just the two of us—drinking a bottle of beer. I think it’s in Seattle, somewhere. We look like just a couple of young, snot-face kids! We got to hang out quite a bit—in their early days, they would come to Priest shows. But I think the first time I saw Eddie play live was supporting Black Sabbath in my hometown, Birmingham, with their first album. And they certainly packed a punch—that’s for sure. But the thing that I liked about Eddie’s playing more than anything else was how absolutely precise he is as a guitar player. A very clean and precise player. Really tight. And he certainly had his own style and technique. And that’s what all the great players have."

JEFF WATSON (Night Ranger guitarist; solo artist): "Eddie was out early. I heard that right as I was leaving my band to start Ranger.* And we were just blown away by Ed. He really changed the landscape for guitar players—with his tone and approach to rhythm guitar I think was really monumentally different than everybody else’s approach. Y’know, sliding notes in between and not just doing barre chords and strumming—he was really using it as a rhythmic/melodic instrument at the same time. Which was really counterpoint to the vocals, and I thought really made the band fly." 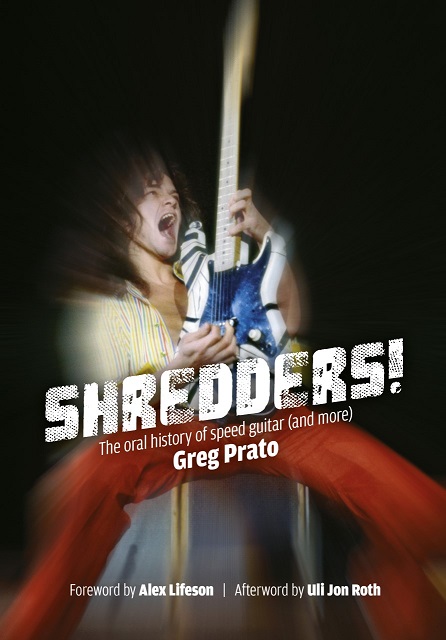 PAUL GILBERT (Racer X, Mr. Big guitarist; solo artist): "I was lucky enough to hear Eddie Van Halen after I played guitar for a couple of years—with Jimmy Page as my idol, and with The Beatles as some of my musical foundation. Eddie Van Halen is 100 percent great, and he unintentionally really messed up a lot of guitar players— because everybody was so enamored with the flashy parts that it knocked a lot of people off balance. It’s funny to see the repercussions of it. The ‘Eddie Van Halen bomb’ went off and it destroyed a lot of people’s rhythm. [Laughs] Which is funny, because he has such good rhythm. But it’s not his fault—it’s the listener’s fault for just listening to ‘Eruption’ and nothing else. At that guitar stage of my life, to me, the thing that made a guitar player a professional/listenable/awesome guitar player was their vibrato. And all those guys had stunning vibrato—in the same way that you would listen to Mick Ralphs, early Ace Frehley solos on Kiss records, Gary Moore, Michael Schenker, and Brian May. Their vibrato was ‘the signature.’ And to this day, Yngwie, man, his vibrato is one of the most beautiful things. My impression is it just gets completely ignored, because of the flashy parts. So like everybody else, I was drawn to the flash, but hopefully, in my own playing, I managed to not be seduced by only that. And I think so much of the guitar community just forgot about rhythm and vibrato and a lot of essential, beautiful, musical things, that again, was all there in Eddie, Yngwie, and Randy’s playing. For some reason, they were so exciting ‘athletically,’ that it just knocked everybody off their feet. And when they picked themselves up, all they could see with that was the athleticism."

HANK SHERMANN (Mercyful Fate guitarist): "We were used to more old school type of playing from ‘70s guitar players at that time. Certainly, this guy—bursting with energy, totally in control with all the notes he’s playing—to this day, I’m still amazed by the first album, which is still my favorite. It’s really amazing what they created on that album. The impact is he changed the way that you could play on the guitar. His solos are pretty harmonic and bluesy, but the way he performed it, is exceptionally fantastic. I started to play guitar in 1977, but I was highly into Ace Frehley of Kiss, who had a much old school approach to the guitar playing. I didn’t get into Eddie Van Halen and the first album until much later, though. But I was blown away."

TREY AZAGTHOTH (Morbid Angel guitarist): "Eddie Van Halen was the one who did the most for helping create the kind of music and guitar playing that mostly had the big impact for me, out of those three guitarists you mention. Eddie was absolutely brilliant and a real visionary. Not just his soloing, but also just how he would pick up a guitar and play. He was one that even if you played on his rig, you can’t sound like him, unless you actually play like him—meaning using a similar picking and fretting attack. His playing was so full of dynamics and his flow with the solos, and his rhythms were quite unique and unusual for that time in my opinion."

JENNIFER BATTEN (Michael Jackson, Jeff Beck guitarist; solo artist): "Number one was Van Halen. He was one of the most inventive, innovative guys out there. He’s personally responsible for selling half a million guitars for guys that wanted to play like him."

JAS OBRECHT (Guitar Player magazine editor 1978-99): "Eddie showed that you could spend fifty bucks on a guitar body, eighty bucks on a neck, and as he put it, ‘Slap it together’—rout the body, stick in a pickup, paint it, and have a beautiful, unique-sounding instrument. Eddie Van Halen opened the door to that whole industry. And all of a sudden, it wasn’t that essential to have a ’59 Les Paul, pre-CBS Fender Stratocaster, or some other spectacular vintage guitar—you could play something you made yourself and sound good. That’s an extraordinary leap, and I think Eddie was largely responsible for the success of those companies. He brought in a whole new spirit of inventiveness."