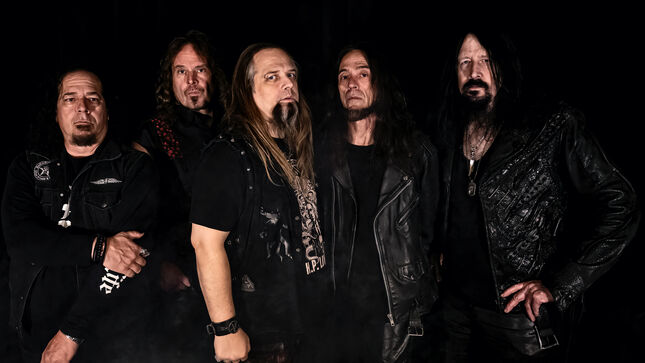 “Donny was a dear friend of mine, I’ve known him since the early eighties,” remembers Kris Gustofson about Trauma singer Donny Hillier. Hillier died on September 28, 2020 from a lung disease. “It was like losing a brother and I wasn’t too sure if I even wanted to continue on with Trauma, but he did say ‘Try to continue, try to keep it going.’” Trauma formed in 1981 in San Francisco, California and issued their Scratch And Scream debut in 1984 before disbanding one year later. Gustofson and Hillier had been carrying the Trauma flag since their reformation in 2013.

Their third album since 2013, Awakening, out September 9 via Massacre Records, is the follow-up to 2018’s As The World Dies and features a more aggressive, menacing sound. In at singer is former Vicious Rumors singer Brian Allen, who fits in seamlessly and brings an angrier vibe to the music.

“We were really on the fence with what we were gonna do and thank God the producer we were working with, Juan Ortega, knew of Brian and said, ‘Hey, I may have a guy,’” recalls Gustofson. “And we kind of took it from there and it ended up working out pretty good. So Brian’s an incredible vocalist and we really like his voice.”

“It was very difficult,” says Gustofson about moving on without Hillier, “but we got blessed with Brian so we kept at it. We went in and recorded what we thought was the best representation of the band. We hope the fans really like what we did because we definitely busted our asses recording that and everything.”

Fans will be delighted to hear that the spirit of Hillier remains on Awakening.

“He’s actually on some of the background vocals,” enthuses the drummer. “Juan thought it was a good idea. Like, ‘Hey, let’s see what this sounds like.’ He blended him with Brian’s voice and Brian really liked it as well. So there’s certain parts that you hear Donny singing on there.”

The writing for Awakening began in early 2020 and with the onset of the COVID-19 pandemic in 2020 and then Hillier’s death, the combination of turbulent, terrible occurrences shaped the rapid aggression on Awakening.

Gustofson explains, “It was kind of deliberate and it was also during COVID. We started writing those songs at the very beginning of 2020 and you know, that’s pretty much when the world shut down for a while. There was a lot of frustration with just everything going on; it definitely had a little bit to do with the album sounding the way it does. Then when Donny Hillier passed away; it added a whole another dimension to it. I mean, 2020, 2021 basically were some pretty crappy years.”

The first two tracks, “Walk Away” and “Death Of The Angel”, also serve as the first singles presented to the public and right away fans received a taste of what’s to come on Awakening.

Gustofson simply states, “We wanted to come out with something that had some impact with faster tempos and more aggressive sounding songs.”

There are some more melodic moments on the record like on the Iron Maiden-ish melody in the midsection of “Falling Down”, a highlight of the album. It’s been reassuring that the new tracks have received great reception on the live stage as Trauma presented new cuts at the Alcatraz Metal Festival in Belgium on August 14.

“That’s one of my favorite tunes too,” says Gustofson about “Falling Down”. “There’s so many that I like, I really like playing a lot of this stuff live too. We played it a lot of it live at the Alcatrazz Festival and a lot of people are really, really digging it.”

“It is a good sign!” he says when asked how it felt to have the new tunes receive positive reception. “That really didn’t dawn on me until the plane ride home, you know? I mean, we had thought about it for a long time, like oh, we’re going to go play these songs for people when we could play older stuff, but everybody’s been really digging playing the new material and we figured, well, if we could pull it off playing the new material and people like it, that could be a good indication that people may really like the new album, you know?” 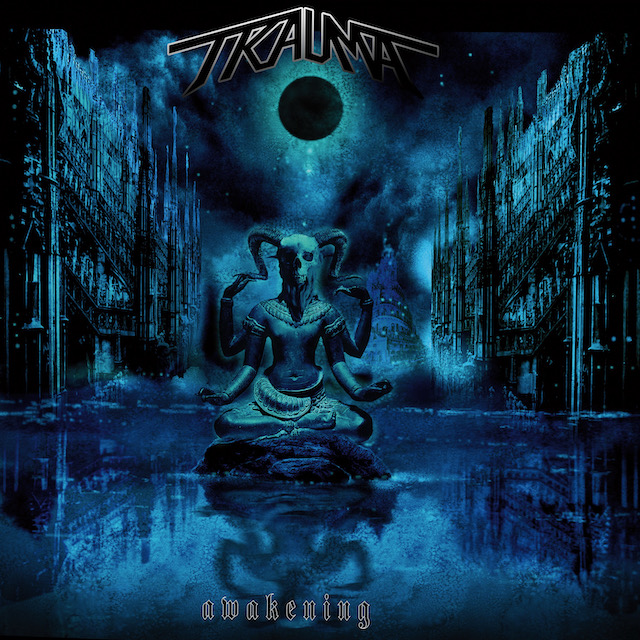 The artwork for Awakening was done by the Ioannis, the famed artist who has created iconic artwork for YES, Voivod, Fates Warning, and Dream Theater.

Gustofson discusses the collaboration and album design saying, “He kind of came up with that on his own. That really didn’t come from anybody within the band. It was more, ‘ok, this is the title,’ so he kind of came up with this thing. We’re trying come up with a name for it [referring to the demon on the cover]. We saw a couple different designs that we picked out because it looked interesting.”

“There’s so many albums that come out in this day and age and it was good to hook up with an artist that had a vision to a certain degree based on the titles of the songs and everything,” he goes on to say. “Something that fits with the record, not like a picture of a dragon, or some chick or something. I mean, how many times has that been done?”

2024 will mark 40 years since Trauma issued Scratch And Scream. The album features Gustofson on drums, Hillier on vocals, Michael Overton on rhythm guitars, Ross Alexander on lead guitars, and Lucas Advicula on bass. Gustofson has great memories of the album, but says it’s too soon to think about any plans to celebrate the album.

He says, “We recorded that thing so many years ago and never really thought we’d be in 2022 and to think all these years later that people even give a crap about it anymore is quite remarkable. I’ve been approached by several different record companies that want to do another re-release, but on vinyl only, but just to have even anybody even talking about it and interested in it is quite remarkable. As far as what we have planned, who knows? A couple years from now we’ll have to kind of see what happens at that point in time.” 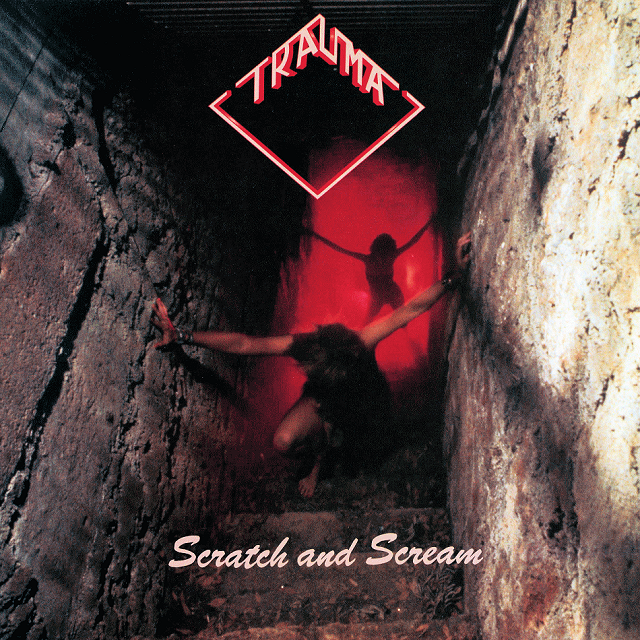 Talking about the album itself, he replies, “I have very fond memories of how we recorded it and how we went in there. I recorded all the drum tracks in one night! When we went in to do that album, we were super, super rehearsed. We knew exactly what we were gonna play. We did a lot of pre-production on it and went in to Prairie Sun up in Cotati, California. They’re still there. The same room that we recorded that album is still there and like I said I did pretty much all the rhythm tracks in one night.”

Trauma’s claim to fame so to speak is they are the band Cliff Burton was in before he went on to join Metallica. Burton was in Trauma from 1981 and left during sometime in 1982. Did Gustofson get to play with Burton at all?

“I joined the band after Cliff left to go to Metallica,” he answers. “But I did meet him several times because he would come to our gigs. When we played like The Stone and the old Waldorf and Keystone Berkeley and all those clubs that used to be in the Bay Area, he would hang out with the band. He was a super, super nice guy.”

With Awakening being Trauma’s fourth album and third since coming back in 2013, does Gustofson find pride that the band is building a sturdy musical legacy and not just being that weird, obscure ‘80s band that released one album and that Burton was once a part of.

The drummer laughs before answering, “To be honest with you, it’s been kind of difficult because the business has changed so much between then and now. You just put the music out because you like doing it, which we really do. We really like recording and all that and you’re hopeful that people are gonna pick it up and like what you’ve done and where you’re going with it, you know? I haven’t really thought about it more than that; if we could continue to keep putting out quality music, I think we’ll do it as long as we can and as long as the fan base wants to hear more stuff, that’s all we can ask for.”

On the touring front, Trauma is itching to get back on the road. They have a rescheduled European tour set for late March and April 2023 and “some things are in the works and it’s looking like maybe the first quarter of 2023” says Gustofson of the matter.

“I can’t wait to get out and start playing.”