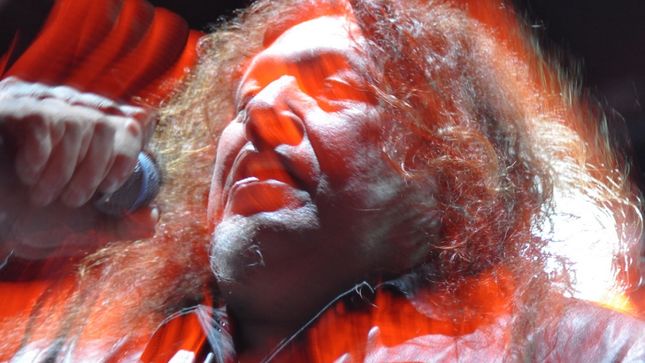 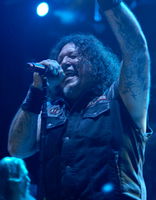 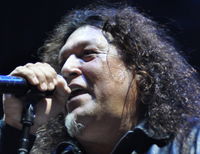 Third year in a row, but 2017 sees a decidedly heavier line-up, with the majority of the acts inhabiting the more extreme end of the metallic spectrum (thrash, death, black), including several long established, big names. As the Independence Of The Seas departed a blackening sky Fort Lauderdale, not one, but a double rainbow appeared, call it an omen. The action begins a little after setting sail, the revelers eager to hear some music. While it's not possible to witness all the bands/fun, some diehards try, staying awake until 5 AM, to catch the last act (and then maybe a bit of karaoke). Personally photographed 23 of the 24 different performers I witnessed, in some cases, viewing two sets by the same group. 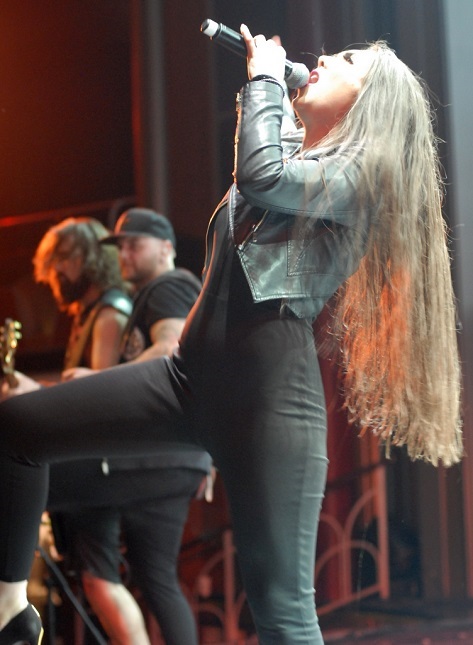 Amaranthe weren't the first band on, but the biggest early name. Although there are three singers onstage, Elize Ryd, the lone female, remains the focal point, having done guest stints previously (most notably, with Kamelot, a role she would reprise during the cruise). Appears she was sporting an early baby bump in that black leotard! Blond guitarist Olof Mörck (of Dragonland) is a deadringer for a long haired Draco Malfoy, from the Harry Potter series. After opening with "Maximize", the soon to follow "Hunger" was blitz of white strobes. Didn't stick around till the end, as had to queue in the photographers' line for the next band.

While awaiting Death Angel, was stopped by a denim vested chap who asked what music was playing over the intercom (Judas Priest, "Hellion/Electric Eye"). Sad enough he paid money to attend a metal cruise, having no clue about one of the biggest metal albums in the last 35 years, but proceeded to say, "This song sounds like where all the metal I know, came from. I'm going to have to check out Judas Priest." Kid you not! The Studio B stage (typically an indoor ice rink for non-metal voyages, was quickly packed to the gills, for the youngest of the San Fran thrasher. In fact, through the first night, the crowds for established acts were overflowing, few apparently interest in the smaller/less known entities to the point of nearly being uncomfortable to navigate perhaps fostering the rumor that next year, 70,000 Tons is moving to a bigger boat. Again!

As the band took the stage, to “Ultra-Violence", singer Mark Osegueda leapt from the drum riser, kicking his feet behind him as he gained air. There might be bigger names from the ‘80s thrash heyday, but few are still as vicious and technically proficient in 2017. Rob Cavestany instantly laid down strafing fire of riffs and mobile guitar partner Ted Aguilar added to the frenzy, moving about the stage. Crowd surfers soon joined the fray. "Seemingly Endless Time" kicks things off. The first thrusting, mid-tempo "Left For Dead" sees strobes pulsating across the full crowd on the floor. It ends with Osegueda nailing a piercing high note. Under reddish/orange lights and a storm of flashing strobes, despite the sardine "spaciness", a circle pit erupted during "Thrown To The Wolves", the singer again launching himself off the drum riser. Cut out just before the finish (hear it was newly issued "The Moth") in order to get to the next venue. 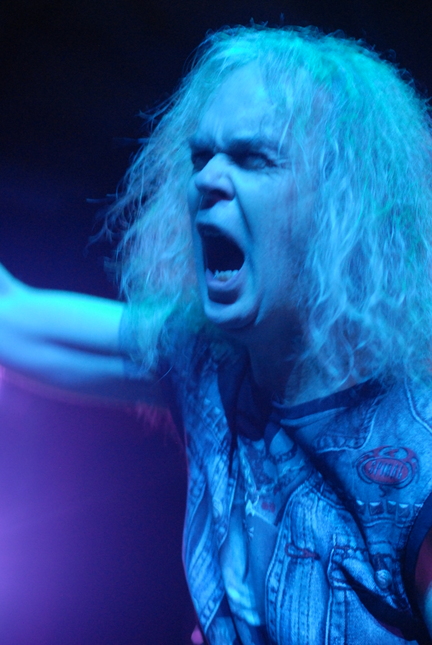 So much for the German punctuality. Imagine my disappointment (especially leaving the Angels), waiting for showtime, as Grave Digger were already more than 20 minutes late (although German precision would dictate the time delay is worth it). In the giant theater, at the bottom of the boat, it's now more than a half hour past their starting time. A lone 70,000 Tons stage crew member tries to track down the difficulty in the drum mics/wiring. At that point there should be a team scouring the stage, looking for answers. Throughout the weekend, the delays were annoying, for the artists, trying to plan their evening, industry types, attempting to balance schedules/interviews, as well as fans, seeking to see multiple bands, some without any lapse between the end of A and start of B. After a protracted delay (nearly 45 minutes), the title track from Healed By Metal introduced Chris Boltendahl & Co. to an enthusiastic throng. Another newbie, "Lawbreaker" was second. "Killing Time" was a bit of a surprise, especially to the casual fan, I'm sure, but rousing "Ballad Of A Hangman" (complete with crowd sung "whoa whoa" chorus) quickly found a happy home. Begun with a stage rattling bass, courtesy of Jens Becker, "Season Of The Witch" met a darkly lit stage. Under red lights, "In The Dark Of The Sun" returned to pace, as the keyboards become more prominent. Another new tune, "Hallelujah", and fan favorite "Excalibur" lead into the now requisite closing run of "Highland Farewell", "Rebellion" and longtime finale "Heavy Metal Breakdown". Could hardly wait to hear the follow-up set, just days later.

Although photographers rarely take in a complete set, the chance to see portions of two shows, often with varying running sequences, sets 70,000 Tons apart from any other festival atmosphere. For their theater onslaught, Testament opted for a heavy dose of recent material, and a couple of classics. Having never seen the converted ballroom so filled, people shoehorned into every crevice; seemingly no one onboard interested in the smaller and concurrent acts. Could barely get to the other side of the barricade, once done shooting pictures, and surely no one was moving from their precious slice of real estate, unless in was overhead of the crowd, hoping the brotherhood would pass them along, safely.

Speaking of Brotherhood, the title track of said album began the night. For once Chuck Billy was without his omnipresent half-stick mic, having to use the old school, traditional model. Can't remember the last time I saw him without his personal "shorty" model! As he toyed with the five foot pole (mere child's play for the massive singer), guitarist Eric Peterson did his best to get in the photogs sights, while on the opposite side of the stage Alex Skolnick blazed away. Early on, it was red and dark lights (the lens man's "best" friend). As on record, "The Pale King” followed. A pair off Dark Roots Of The Earth (title cut & "Rise Up") came next. Sporadic (not constant) strobes greet "More Than Meets The Eye" before returning to the newest work, for "Stronghold". A yellow lit "Into The Pit" sees three part backing vocals for the titular chorus. Afterwards, Billy teased, "Keeping with the old school shit," as he introduced "Over The Wall", what turned out to be not only my last Testa-tune of the evening, but (from what I learned later), the final oldie of this set (saving much for the on-deck performance two days hence). Ultimately ending with "DNR", the "3 Days Of Darkness" obscurity and "Formation Of Damnation" conclusion. 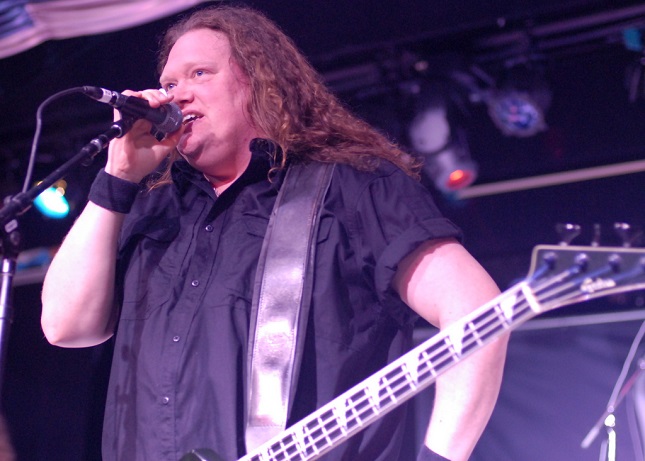 Discussing the cruise, once returned to port, the consensus seemed to be that the American acts (predominately the old school thrasher, but also including Kamelot and DevilDriver) schooled everyone on how to put on a show, in terms of song selection and presentation. One of the few truly potent overseas entities was (equally long running) death metallers Unleashed, who have always imbued the evil sounding ways with a strong sense of underlying melody. Not much of stage show, just punishing death. Beneath an oversized backdrop, which couldn't be flown full sail, mainstay bassist/vocalist Johnny Hedlund promised some old school material (a greater variety would be, ahem, unleashed outdoors, three days later) which included "If They Had Eyes", form the 26 year old debut. A pounding "This Is Our World Now" is always welcome and "Winterland" was purple lit. Bent at the waist and twirling hair, ironically, Hedlund was walking the deck, earlier in the day, with his wife and kid. He offers "a slow one," in the form of "Fimbulwinter" on an almost dark stage, while the green tinged and strobe augmented "To Asgrad We Fly" being one of the highlights.

Late into the night, fans and musicians alike, gather in the casino bar (only indoor smoking area) for drinks, conversations and fun. Not everything happens onstage.

Additional photos can be seen here.