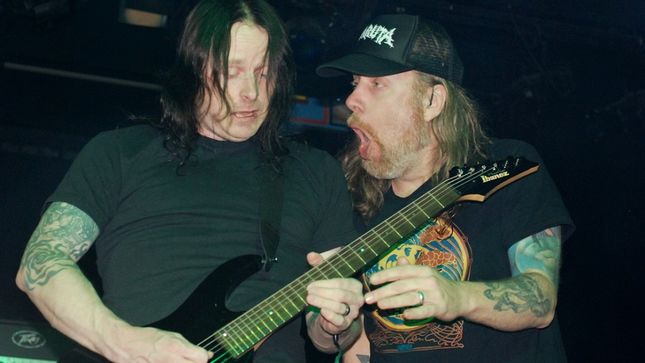 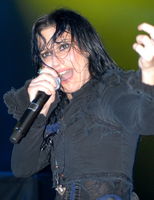 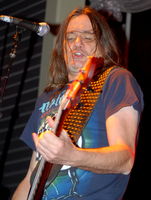 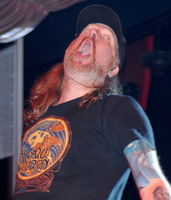 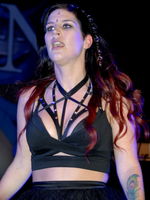 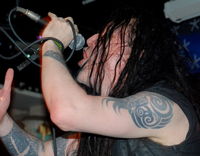 The ship doesn't sail until 4 PM Thursday, thus not a full day of music, but old friends and new ones mingled on deck with cocktails, while we stared at the Fort Lauderdale skyline on a warm February 4th day. The cruise was sold out in advance which is a tribute to organizers who've built this beast and fans that are enjoying this new way of being entertained. And the disease is spreading, 71 countries being represented this year, which is a remarkable feat in itself! While 60 bands were aboard (each performing twice), the line-up was most certainly varied this year and a little lean on the heavier (black/death) spectrum of the scene and there was a greater emphasis (deservedly so) on female participation (Epica, Lacuna Coil, Nervosa, Delain, Vision Of Atlantis, Eluveitie, Arkona, Holy Moses, even Cradle Of Filth), as the composition of the audience continues to grow the already strong presence of the fairer sex. 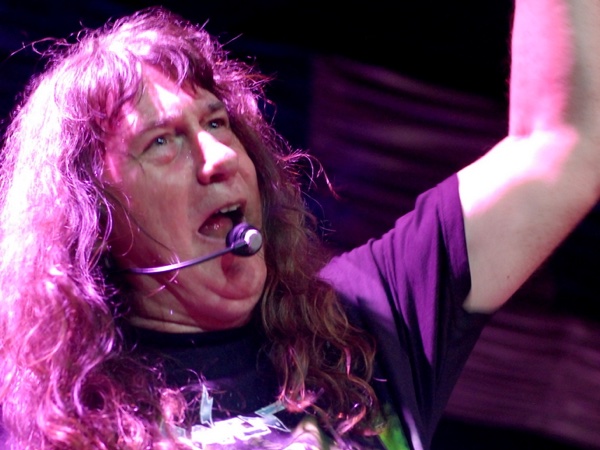 Initial band onstage? None more fitting than Raven, the NWOBHM trio having been an influence (direct or otherwise) on much of the scene. The over-the-top antics of the brothers Gallagher may have dimmed, somewhat over time, but they still pull faces to the crowd, John (bass) unleashes wild, high pitched vocalizations, while Mark (complete with black baseball catcher's shinguards, left over from the 80s Athletic Rock days, rusted clips and black tape keeping everything in place) seems to strangulate the six-string, which can only belch forth notes, under duress. Age hasn't slowed their willingness to throw themselves around the stage, offering up classics like 'Live At The Inferno (with Mark & John center stage, guitars smashing together), 'All For One', a yellow lit 'Rock Until You Drop' (buzzsaw bass sound) and 'On & On'. Down front, someone held The Pack Is Pack vinyl sleeve aloft. Really? THAT album? 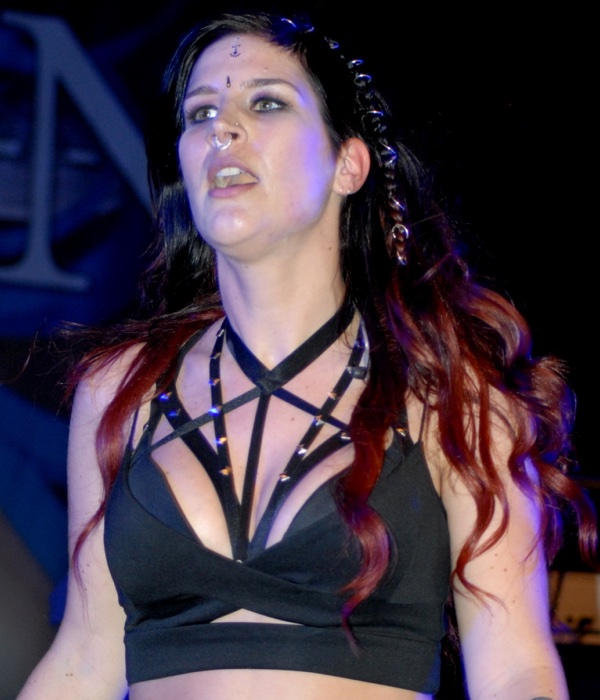 There was a massive traffic jam, stairs filled with people waiting to see Delain in the big theater. Didn't help they were late going on and wouldn't allow fans into the venue (typically there's a free flow of people, regardless if anyone's onstage or crews are setting up). 'Suckerpunch' was started as procession (thankfully) proved a safe and orderly entrance. Charlotte Wessels has always been a "hippie chick," in bell bottom jeans and sandals offstage, but her onstage persona was a little more glamour: be it the hair done and skirt at ProgPower USA in 2010, the hot pants/dress jacket combo (Wacken 2010) or the mini and imitation garters, two years later. Things are bit different now, with nose ring and Hindu (?) paint on her forehead. They've added diminutive cutie Merel Bechtold on second guitar, who cheerfully plays alongside Wessels. 'Get The Devil Out Of Me' followed and later, both 'Sleepwalkers Dream' and 'Don't Let Go' were aired. 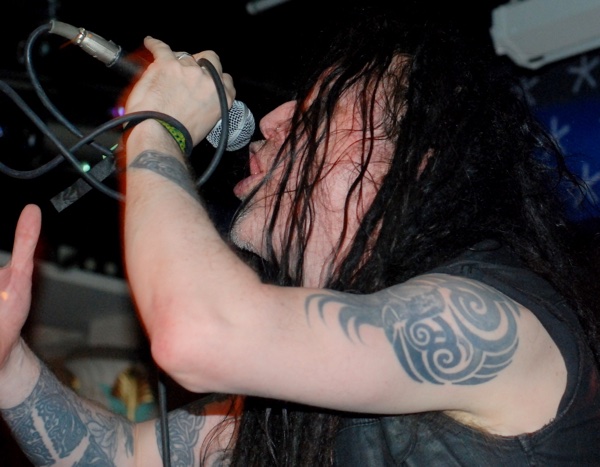 Not the first time witnessing Vallenfyre, the crusty grindcore outfit founded by Paradise Lost guitarist Gregor Mackintosh. Here he serves solely as lead vocalist, unleashing his lengthy dread, uncoiling like Medusa on a bad hair day, flopping in front of his face, or wildly undulating as he spasmodically headbangs. Upon meeting up with my old friend, he offered, "Mark, you look exactly the same as 20 years ago (even though we've crossed paths a few times since). Maybe you just looked like shit early on, but it's a compliment!" Can't claim to be a huge Vallenfyre fan, but it was early in the cruise, shot photos from behind the barricade of the tiny Pyramid stage and was there to support Greg, as was PL singer Nick Holmes. Nervously downing a pint, Nick conveyed concerns about pulling double duty the next day, fronting Bloodbath, preceding his usual gig. After opening with 'Scabs', the Fyre bugs offered up 'Odious Bliss', 'Cathedrals Of Dread', 'Humanity Wept' and 'Dragged To Gehenna'.

At any point during the weekend, you can see the stars wandering the ship, sharing a drink, photo or story with fans. While formal signing sessions are scheduled, much of the allure, for fans and bands alike, are the unscripted moments. Ran into Gamma Ray mainman Kai Hansen on the stairs. Suggested the singer be leery of the strong afternoon sun, to which he quipped (with a smile), "Best to warn me; Stay Away From The Bar." I suggested he probably had more experience there, than in blazing heat, as we both chuckled, in agreement. 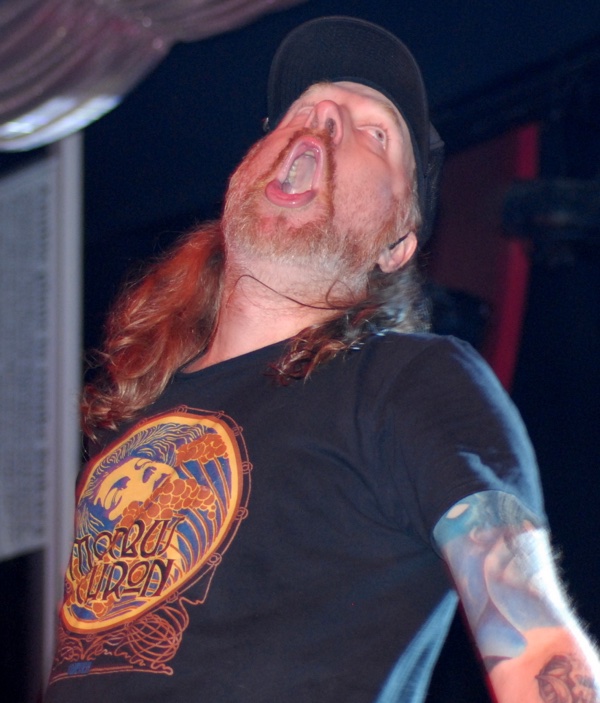 It's an imprecise science, but they severely underestimating the draw. At The Gates should have been in the bigger theater (especially with crowd surfing and mosh pits erupting), what with Lacuna Coil playing to empty seats and the Swedes not only delivering THE gig of the day, but some of the most talked about performances of the entire cruise! And really the story is remarkable. Nobody ever thought there would be a follow-up to Slaughter Of The Soul, but the material on At War With Reality is equally as strong and crushes inside this set. With the crowd standing with baited breath, we commence with the eerie spoken-word intro "El Altar del Dios Desconocido" which crashes into into "Death and the Labyrinth”. “Slaughter Of The Soul”, “Under a Serpent Sun”, “Suicide Nation” and “Blinded by Fear” will forever be staples in their set, but the melancholy majesty of “Heroes and Tombs" and closer “The Night Eternal” just showcase how much a triumph the new material is. And newbie “The Book of Sand (The Abomination)" may be the finest piece of thrash/speed metal of the bunch. Pure moshing madness! Can't wait for the pool-side set! 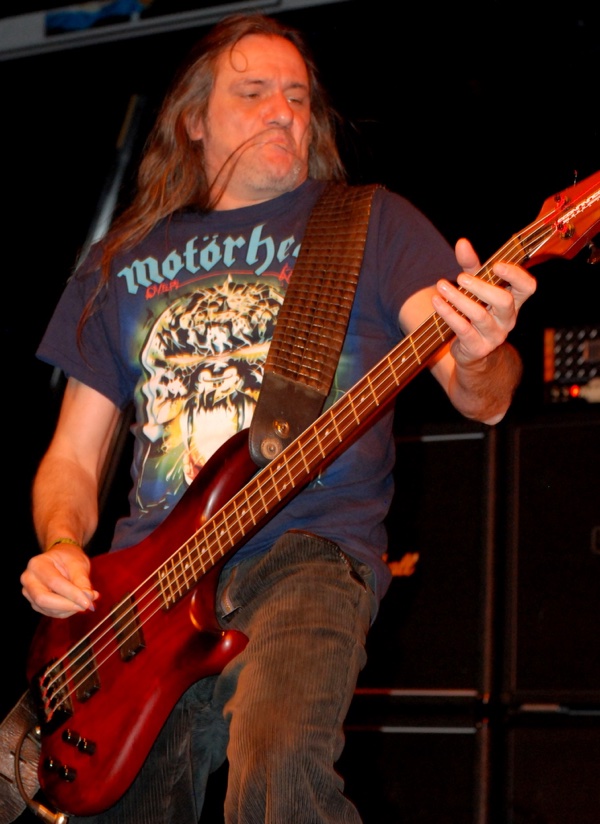 There were a pair of mics, placed center and stage right, to facilitate Tom Angelripper's wandering around the stage, yet never be too far from delivering lyrical fire. 'Outbreak Of Evil' saw the bassist get the crowd to sing the titular chorus. Chants of "Sodom! Sodom!" greeted the silence between tracks. 'Surfing Bird' morphs into 'The Saw Is The Law'. In Motörhead Overkill t-shirt, Angelripper stands legs splayed, a slight upward tilt of the head as the lights flash purple and reds. Yellows introduce the crawling intro to 'Napalm In The Morning', while pink (?) bathes newbie 'Stigmatized'. Afterwards, the lanky, corduroy pants wearing bass player readjusts the stand, raising it above his head, and placing the mic sloping downward. Almost on cue (although none provoked), fans chant "Lemmy," the positioning recalls the stage set-up of the late Motörhead legend. To oblige, Sodom cover 'Iron Fist'. Afterwards, Angelripper speaks his thoughts on the man and influence. The primitive thrash of 'Blasphemer' follows, before I ducked out, getting ready for Iced Earth.

Onstage, Stu Block announces it's been almost two years since they've played. Wouldn't know it. Their sound is decidedly louder, heavier and cleaner than most who've played the theater today. Iced Earth founder/guitarist (and occasional backing vocals) Jon Schaffer is alone, stage right, while Block stakes out some real estate near the center As singer, he's allowed to tread on sacred ground, but the others remain the opposite side of the great divide. Nice to see Brent Smedley back on drums. Shortly after a 'Plagues Of Babylon' opener, the tolling bell heralds 'Burning Times', up much higher in the running order than it'll appear three nights hence. Backed with the riffing 'Pure Evil', the older stuff still translate better live, but rather hear 'Days Of Rage' than also aired 'Damien', as it fits nicely aside the vintage cuts, both sonically and in terms of intensity. Backwards ballcap, "Virate" visible above his forehead, a fit and trim Schaffer wore a solid black tank top, showing off his well tattooed arms. Blue lit 'The Hunter' gets crowd doing the "whoa whoa" parts, while 'Vengeance Is Mine' is a heads down basher, the assemblage adding their voices to the title phrase/chorus. Hurry up Jon, get that studio build and start recording the next album. Shows like this remind me how much we need new Iced Earth! 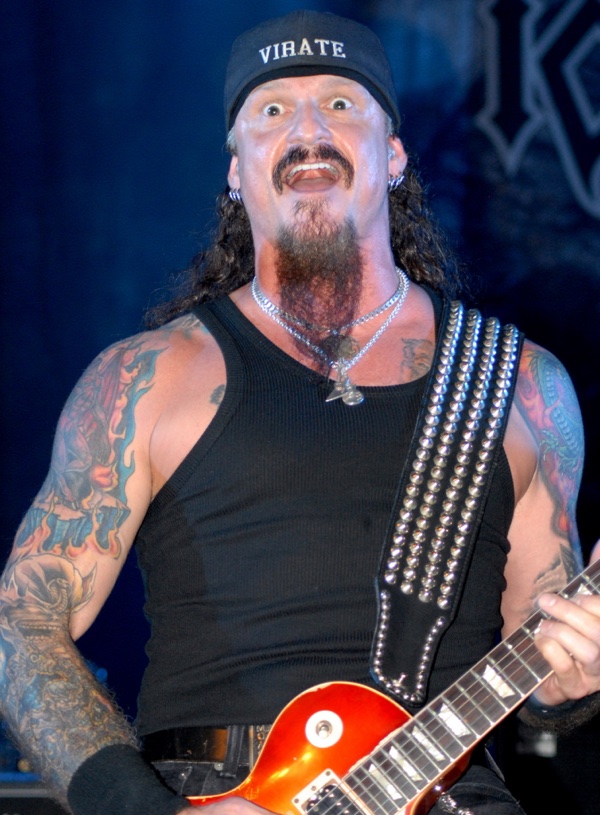 Check out a cruise overview with even MORE photos at this location.