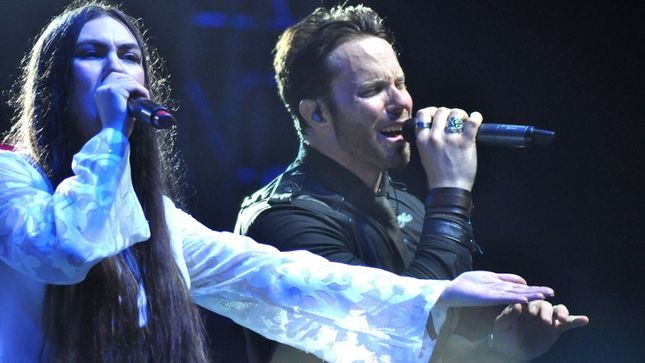 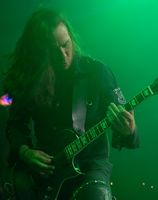 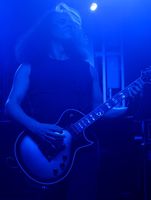 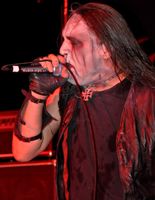 Prior to our visit to Haiti, and then heading back towards mainland Florida, whenever someone attempted to use smoke/fog effects on the outdoor stage, the prevailing winds simply wiped it clean. Despite the best intentions of a lead thumbed effects operator, the compressed carbon dioxide and/or fog machine looked like con-trails, a fine line of rapidly moving (and dissipating) mist. However, now headed into the jet stream, the stage was enveloped in fog, all but obscuring the artists from view. Those of us who remember the ‘80s laughingly reminisced about classic shows "seen," but in reality only heard, by some of our favorites, back in the day.

On previous 70,000 Tons ports of call, the BraveWords team has taken it upon themselves to venture away from the pack, typically walking, or jumping in a cab, to find a remote (and often luster scrubbed) destination, to get the "real" feel of the island, not some sanitized (cruise line owned) pre-packaged version of said locale. Unfortunately, that was not possible In Labadee, Haiti, not that I had any great designs on venturing inland on the hurricane ravaged, economically depressed nation, for safety/health reasons. So the late morning and afternoon were spent on the white sand beach, watching zip-liners overhead, sampling a "free" buffet (hot dogs, hamburgers & chicken, how local!), wading into the rock footed blue water and sharing drinks with a mix of passengers and artists. In reality, none too different than what could be had on the ship, apart from the sand. Overkill's frontman joked how vacationing Canadians end up looking like their flag (red & white)!

Once back onboard, despite best intentions, the sun/heat seemed to sap some energy from musicians and fans alike. Mors Principium Est reignited the twelve hours of entertainment, at 5 PM, although some were recovering from the day (showering, sleeping, eating), others nursing sunburn and not wishing to expose themselves to the Finns out on the deck stage. Asking who got burnt, then admitting he was equally inflicted, the literally red-faced singer Ville Viljanen (who sings with his left hand behind him, in the small of his back) led them through the likes of "Leader Of The Titans", pre-recorded female vocal enhanced "Pure", aptly entitled, more subdued "Reclaim The Sun", "I Will Return" and other gruff throated early-Soilwork sounding melo-death. As night began to fall, belly satiated and wounds licked, the ship's mood enlivened. 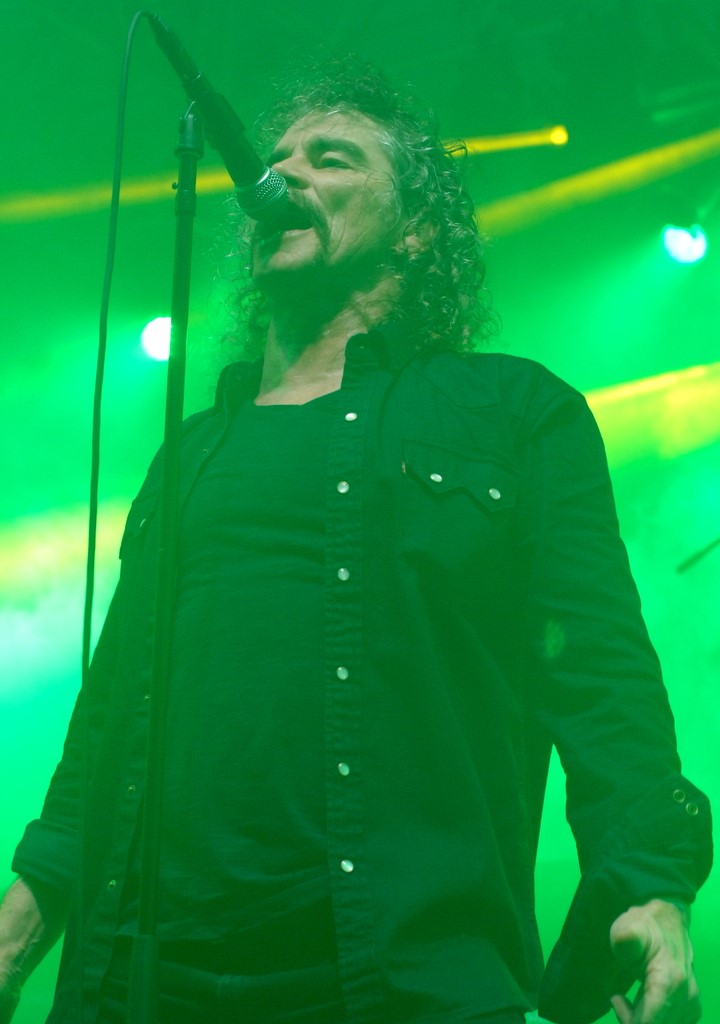 Second Overkill show in as many days, this one outdoors and with a slight alteration to the setlist, although again kicking off with "Amorist". After two songs, Blitz is sleeveless, skin showing no visible signs of time ashore with his wife. "Rotten To The Core" and “Electric Rattlesnake" are accompanied by copious amounts of theatric fog. In fact, you'd think there was a raging inferno (or at least a hillbilly BBQ) underway on the deck. White searchlights crisscross the fog shrouded stage throughout "Hello From The Gutter". Old-timers would say this is the way to "see" Overkill, recalling the days and impenetrably thick screen (added by the indoor smoking policy of the day) would envelope the massive Ritz stage. The singer fiddles with the mic stand as a prop, much more so than usual. Flashing strobes, during "Infectious", fail to cut the invisibility mist. The oft repeated "Can't You See" line in newbie "Our Finest Hour" takes on an unintentional comedic bent: No, we can't see shit! Ditto "Feel The Fire", as not sure about the heat, but definitely saw the smoke. The Thin Lizzy cover, "Emerald" is appropriately green lit. Throughout, Blitz offers less witty banter, although prior to the concluding "Elimination/Fuck You" duo, he does admonish, "No time to be a pussy. Get in the lifeboat." When it's time to hang up the leather, don't be surprised to see Blitz try stand-up.

Ironically, saw Overkkill take Testament out as their opening band, when they were mere kids. Tonight's schedule flip-flops that line-up. Of the two gigs, this was the Testimonial to witness, loaded with classics and only offering a smattering of newer material. Said it before, festival sets (of which 70,000 Tons qualifies) should be less about flogging new product and just delivering the hits, since not everyone is a fan of the band. "Practice What You Preach" signaled right from the start that this would be a different evening. Is there really a stronger ‘80s act, top to bottom? While most of the Big 4 (and more) have a two or three man nucleus, Testament sports some of the best musicians (Skolnick, Hoglan, Di Giorgio ) with a beast (imposing physically as well as vocally) in Chuck Billy and Eric Peterson is no slouch. Find a better musical line-up, I dare you.

For "Rise Up" Skolnick played the guitar vertically, an oft duplicated trick throughout. Bassist DiGiorgio was noticeably more active, walking to both sides of the stage. The abruptly ending "Pale King" sees the guitarist venture to the very edge of the stage. Billy announced that since the boat was near the Bermuda Triangle, time to play "Raging Waters". Whatever the impetus, a spirited choice. Plenty of crowd surfers by this time, the sickest pit of the journey. "Into The Pit" segues into "The New order" courtesy of Skolnick's trademark opening notes. Copper lights, white streaks and plenty of fog for the old chestnut. A blue lit "Stronghold" shakes the whole place, thanks to bass/drum rumble. A couple of repeats from the other night, before ending with "Alone In The Dark” (whoa whoa) and "Disciples Of The Watch" finale. In a word, wicked! 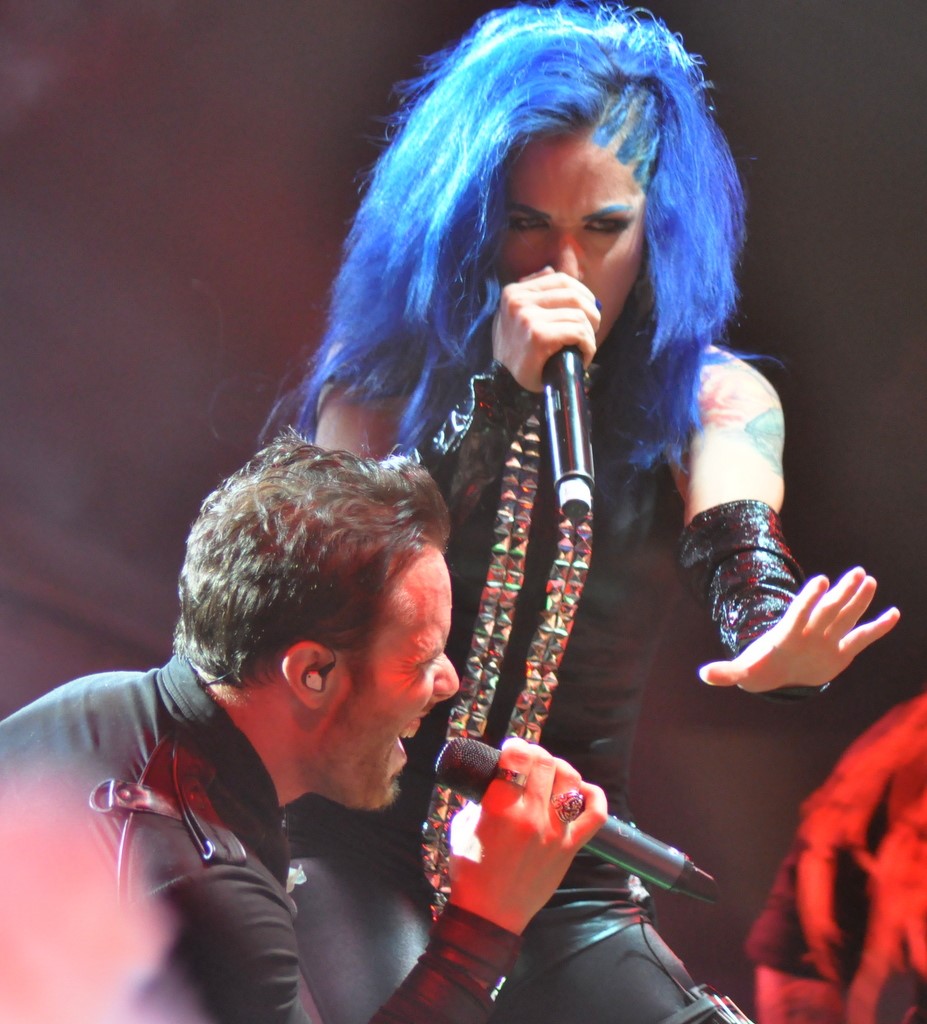 Outdoors, Kamelot offered a different show, complete with mainman/guitarist Thom Youngblood walking onstage with a video-cam on a pole, to film the audience, during "Veil Of Elysium". Like the album Ghost Opera, the back-to-back pairing of "Rule The World" and the title track started things off. Singer Tommy Karevik was active, jumping on the road case riser, bending down on his knees and venturing to the edge of the stage. A frisky "Center Of The Universe" sees the crowd sing along, as Elize Ryd, in white lace (wedding?) dress joins the band. Reprising the guest female drummers from the night before, "March Of Mephisto" also welcomes Arch Enemy's gravel throat Alizza White-Gluz. Again drum/keyboard solos before "Forever" wraps up the proper set, the band actually returning for an encore (something not typically done aboard 70,000 Tons, what with the tight timetables), "Revolution" and blue lit/billowing smoke filled "Sacrimony (Angel Of Afterlife)", where the two female guest vocalists reappeared. A fitting finale.

Amorphis were down in the theater, running through the entire Eclipse album, chronologically. As such, "House Of Sleep", one of the biggest songs of the Tomi Joutsen era is up second. "Under A Soil And Black Stone" begins with wah wah pedal and morphs into jangly, upbeat romp. Unique performance, but would have preferred a couple old numbers peppered in, especially since "the new guy" (he's been there more than a decade now!) has the powerful voice needed for the death metal material. Imagine, saw almost two hours of live Amorphis and the only pre-Joutsen song aired was "Drowned Maid". Wow! However, "The Smoke" alone is almost worth the price of admission. Great song. 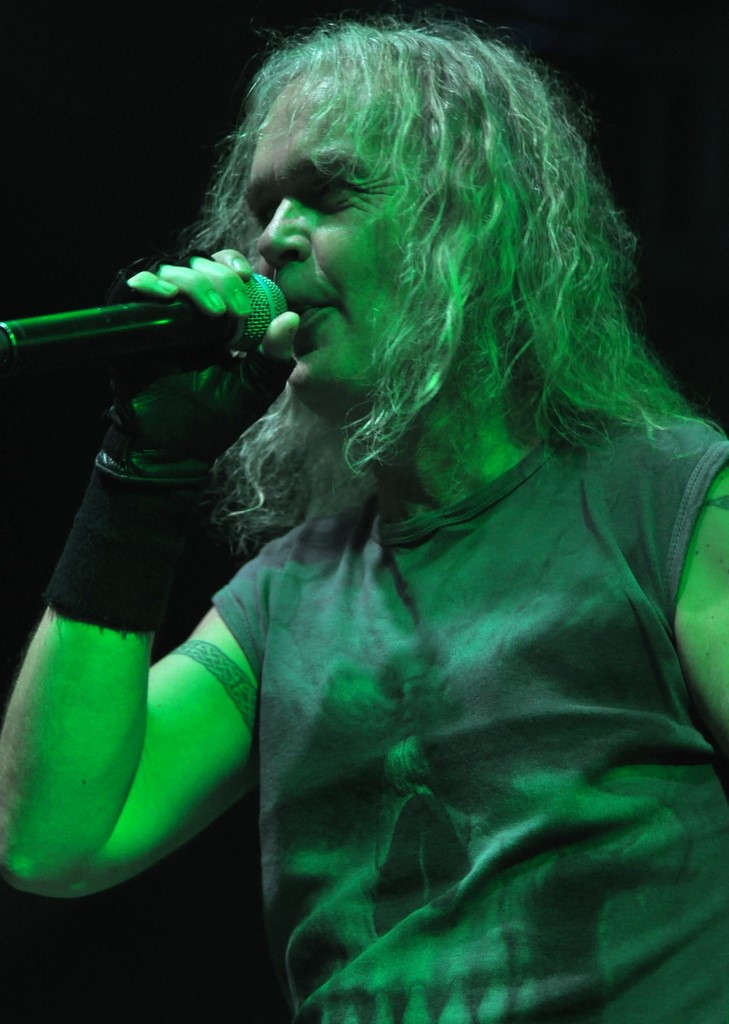 Grave Digger capped a busy day and while there were other, later, offerings... know what they say about all work and no play. Essential the same start ("Healed By Metal", "Lawbreaker") and long requisite closing trio ("Highland Farewell" "Rebellion", Heavy Metal Breakdown"), the mid-section of the set was jumbled, with some alterations. Outdoors there was plenty of fog, not available in the theater. "The Round Table” replaced "Killing Time" in the third slot. Chris Boltendahl sent old school "Witch Hunter" out to yours truly, taking photos in the pit. Like 2015, the singer had the crowd sing "who whoa, the mighty Grave Digger is on the boat", to an almost reggae beat, prior to green lit "Season Of The Witch". Surprised to hear "Free Forever" and "Morgane Lefay", sandwiching a spirited "Tattooed Rider". X-cali-burr is the pronunciation of the fabled sword, repeatedly shouted by Boltendahl and fans alike, before leading into the closing stretch run, capped as always with the sing-along title track from their '84 debut. With the titular chorus ringing in my ears, headed to the casino bar for a nightcap, or two. A return to society looms all too quickly!