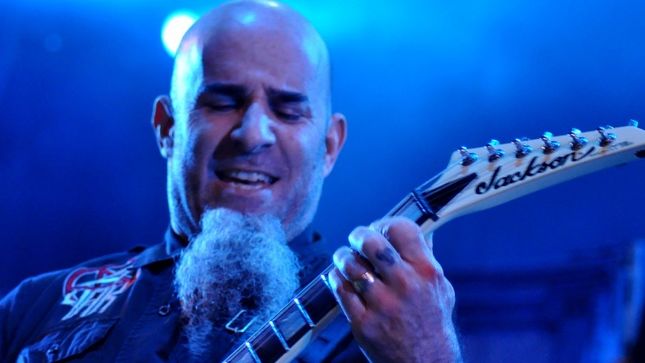 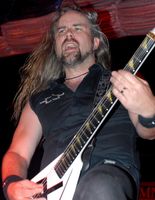 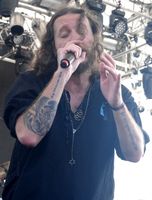 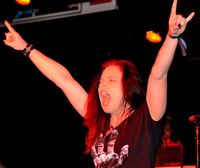 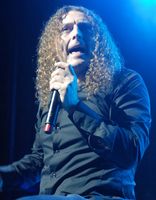 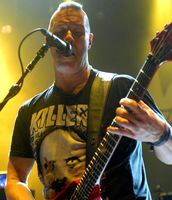 So many flavors and just from looking, never know what you're going to get. Don't know if it was part of The Skipper's master plan, but with most big names already completing two show, the final day aboard Independence Of The Seas saw a sporadic sampling of bands thus far ignored. Yet, trying to unearth a sweet morsel in a rapidly depleting mixture could prove difficult. Choose carefully. Sunday also is, for some unknown reason, dress-up day, a combination of Halloween and cosplay, exposing with way too much unsavory skin.

Unlike my previous experiences at sea, ventured into the Pyramid Lounge for the first time this cruise, where bands set up on the floor (behind a barricade) and anyone more than two or three people deep can only see the heads of the performers. There are tables and comfortable couches/oversize fluffy chairs, for those that just want to relax and "hear" the show. Odd setting for Witchtrap, a raw, rudimentary Colombian thrash trio. Had just finished an expose on South American metal, so felt the need to check these guys out. As they begin, people filter in from the belly flop contest on deck. Quite literally, countrymen and women are draped in their flag, some foisting a fistful of the tri-colors skyward, as "Winds Of War" begins. There are high pitched screams, courtesy of guitarist Burning Axe Ripper, as well as the early Sodom meets Slayer mix of "Riot Of The Beast" and slower, pounding "Queen Of Hell".

Interesting diversion until it's time to reacquaint myself with Orphaned Land, having seen the band at the Knockout Festival, in Germany, plus Progpower USA. Out in the sunshine, shimmying, bare-footed frontman Kobi Farhi is in a zone (trance?) getting the crowd to sing along to the chanted lyrics ("The Kiss Of Babylon"), put arms in the air, even jump in place during a set that includes female guest vocalist and for "All Is One", a shoulder mounted flying V violin! While I had planned to see the Israelis' set, earlier in the trip, under the desert-intense heat seemed more appropriate, for the likes of "Olat Ha'tamid", "The Simple Man" and "Norra El Norra". 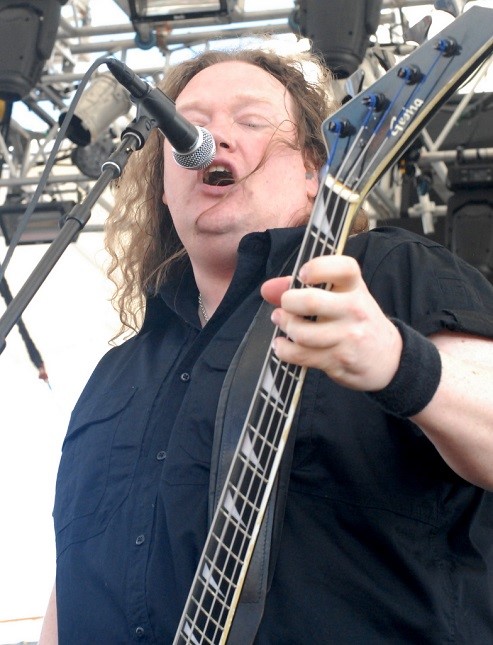 Johnny Hedlund promised the sun drenched Unleashed set would be old school, concentrating on the first few discs of a now 26 year recording career. That included a bouncy "To Asgard We Fly", lots of pinwheeling hair. Almost didn't hear "Execute Them All", since upon announcing the title, the longtime bassist/singer demanded, "I'm not going to play it, if I can't hear you!" The slower grind within "Final Silence" allowed the hulking frontman a brief moment out from behind the mic. Unusually vocal, Hedlund claimed "Had a pretty good album, so for today, I'm changing my name to Albert Fish," cue "If They Had Eyes". Foot on the wedge monitor, a gurgling growl opens "Shadows In The Deep". Powerful!

Some might have hung by the pool, others off to the bar, maybe a bite to eat, or catch an afternoon nap, but with time to kill (translation, no "must see" band for a while), opted to take a look at a couple of none too familiar bands. First up, Nightmare. The French outfit was vaguely known, sporting a lineage back to the late ‘70s, but had never really given them much of a chance. Currently fronted by sparkplug Maggy Luyten, it was a traditional heavy metal set, including a purple lit "Of Sleepless Mind". The diminutive singer stalked the stage and in heeled boots teetered close (toes over) the edge, as she led the charge. The title track from the just issued AFM album Dead Sun revolves around the terror attacks that have gripped Paris.

Moving on, a little more Orden Ogan (this time in the minuscule Pyramid Lounge), as much out of curiosity, for the surroundings, as more versed in the band's material. There, witnessed a rare moment of bad sportsmanship. During "We Are Pirates" and headbanging approved "Deaf Among The Blind", a few 20-somethings, in death/black metal tees, were mocking the music/band, laughing and pantomiming the over-the-top nature of the Germans' music/image. Sure, there's enough in any sub-genre to raise a chuckle (look at the plethora of Abbath memes), but one guy wore a plastic replica of a professional wrestling championship belt. Talk about ridiculous antics/imagery! Thankfully, with nearly round-the-clock options, this sort of musical "infighting" is the exception onboard 70,000 Tons. "F.E.V.E.R." cued my exit, until we meet again, probably at some festival, on European soil.

Initially had no intent on shooting Omnium Gatherum, having seen the Finns last year at Tuska and knowing they'd just completed a North American run with Sonata Arctica and Leaves Eyes. Another cold 25.7 ounce Foster's "oil can" convinced me a show was better than sitting alone in your stateroom (at least for me, although some fans/musicians might disagree). So there I was, back at the ice rink (logging a lot of time there, on this last day), listening to some gruff throated, two guitar (plus keyboards) metal. Markus Vanhala employed the full Alexi Laiho (Children Of Bodom) rock guitarist playbook: vertical playing, head shake side-to-side while shredding, etc. Airing "Frontiers" and "The Great Liberation", Vanhala was active, as was singer Jukka Pelkonen.

Some of the usual cruise ship amenities, like the wine bar and jewelry/watch sales, are nearly empty. Others, like Sorrento's free pizza slices, almost always have a line, especially late night. First opportunity for most North Americans to witness old BraveWords pal Peter Tagtgren, in the Pain guise. However, he will also bring the popular electronic rock to Atlanta, for ProgPower USA, in September. In trademark straight jacket, the longs (usually tied in the back) sleeves whipping around a minimally lit stage, charcoal eye black scrawled across the mainman/guitarist's face. Plenty of strobes piercing the shade. Opener "Same Old Song" is one of his biggest tunes, setting the pace for what's to follow, which is Peter, tethered to the mic and minimal visuals. From there, a brief stop to see Edenbridge, with singer Sabine Edelsbacher, replete in little winged get-up. 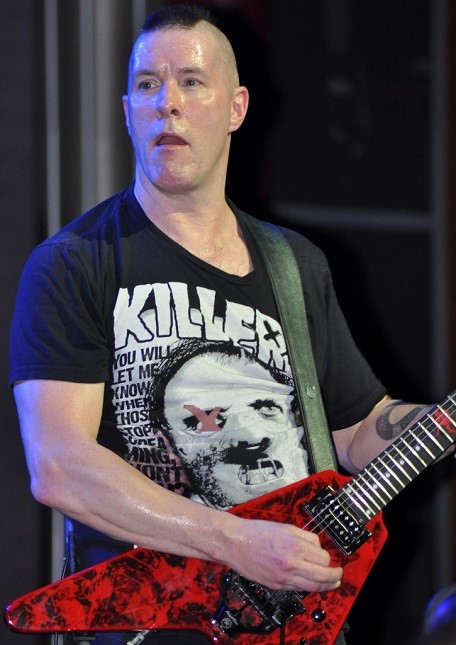 Annihilator sees founder/guitarist/vocalist Jeff Waters (he of the Mohawk haircut) zig-zagging around the stage, between/around mic stands, pedals, monitors and bandmates, like a tot playing hide & seek. Actually, guitarist Aaron Homma is onstage first, with red Flying V, black hair draped across his face. Unique start to the set, opening with Suicide Society", followed by "King Of The Kill" (early in the set, so much Metal Tim missed it, first time around). Airing of the band's eponymous track is something of a rarity, backed with "No Way Out". Throughout, Waters mugs for the crowd, pulls faces as he bends strings and gives blank looks. The second half of the set was reserved, for old, well known anthems, including a vintage run of "Welcome to Your Death", "Alison Hell", "Brain Dance" (with "Chicken And Corn"), "Phantasmagoria" and "Human Insecticide". What year is it again? While I've seen the Canucks repeatedly at bang Your Head, and/or Wacken, first time in decades most North Americans had the chance to enjoy Annihilator live. Far too long. "Come back" soon!

Like ProgPower, last fall, Angra offered a run through the samba & salsa influenced Holy Land album, albeit incomplete. Fabio Lione, now completely free of Rhapsody commitments, was in fine form, vocally, as well as in stage presence, the Italian interacting with his Brazilian bandmates, especially guitarist Rafael Bittencourt, who took over the mic for "Make Believe". According to the handwritten amendments to the setlist, the headset wearing guitarist lost two additionally planned vocal spots ("Deep Blue" and "Lullaby For Lucifer"), the band rounding out the evening with "Newborn Me" and "Nova Era", instead. The classical/operatic begun "Silence And Distance", allows Lione to strut his stuff, while more uptempo material sees the band adopt synchronized stage moves. 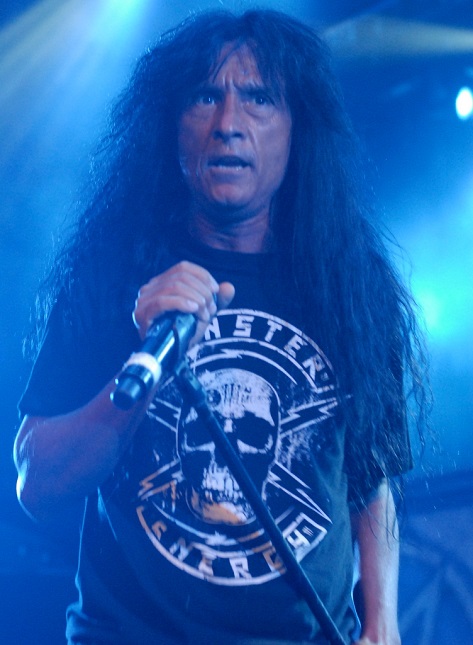 What a professional presentation from Anthrax, to all but round out the cruise. Surprising Super Bowl comeback cemented in history, most joined the New Yorkers in the Alhambra Theater. From the opening notes, Joey Belladonna (half-stick mic stand in hand) took out sprinting/skanking around the stage, like an ADHD tike on Red Bull. Amazing speed and agility for an old-timer. Scott Ian was his usual stage left, headbanging and occasionally walking in circles (as he played). 30th anniversary of Among The Living looms (truthfully, the last Anthrax record I listened to, prior to Worship Music, our tastes having grown apart), biggest hits but the debut and follow-up EP were always my go-to discs. Sadly that stuff has all but been exorcised from the set (maybe one Fistful Of Metal track, in a headlining tour these days), but re-examining/updating older discs has paid dividends, in the renewed importance of Spreading The Disease, tonight we got "Lone Justice" AND "Medusa". "A.I.R." and "Madhouse" were played at Friday's show. 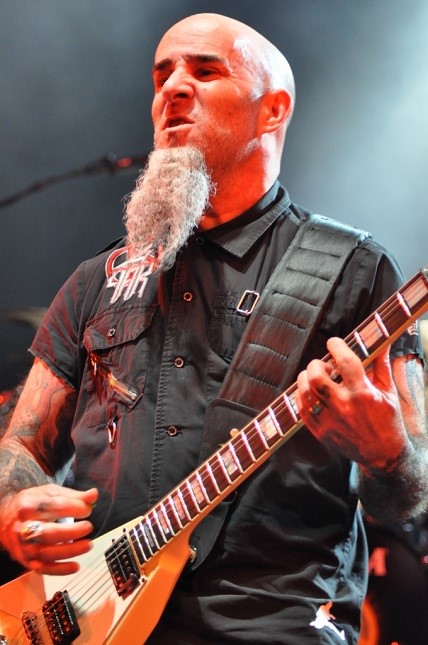 Each guy knows his role and together (while not much physical interaction), create a monster stage presence. "Among The Living" and "Caught In A Mosh" got those that still had enough energy to crowd surf, going. The pentagram scrims onstage were covered for dedications to fallen metal heroes (including images), but isn't it time to update/move on? Seems like cheap applause to me (and Lemmy is certainly more timely and equally as worthy). Always one for cover tunes, thankfully "Got The Time" got the axe and from Ian's legendary side project there was the short, grinding guitar instrumental, "March Of The S.O.D." Just two from For All Kings, "Evil Twin" and "Breathing Lightning" which has ensconced itself near the end of the set, alongside classics, like the "Indians" closer.

Really felt like tying a bow on a present, ending the 2017 edition of the 70,000 Tons. Sure, there was still a few more hours of music and some partied right through until we docked back in Fort Lauderdale, but with a flight to catch and a return to work/civilian life, just a day away (many Euros take a vacation after the cruise, staying in Florida for another week or so), put down the notebook and packed up the cameras. Next’s year’s journey is on the same vessel (Independence Of The Seas) from February 1st - February 5th (and yes, another Heavy Metal Super Bowl Sunday) to Turks And Caicos. Plan to be onboard!