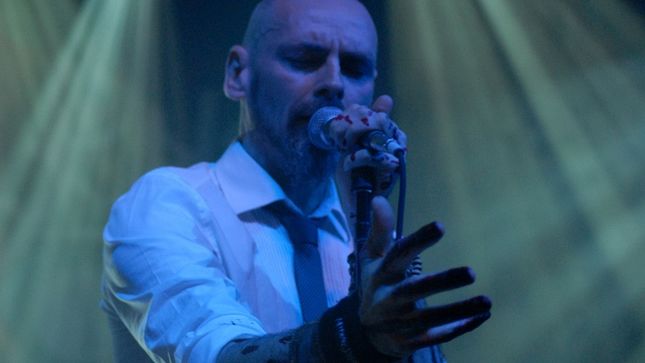 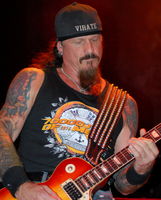 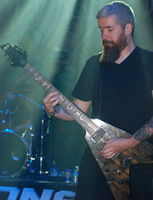 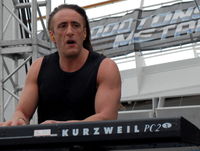 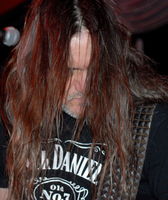 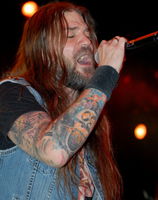 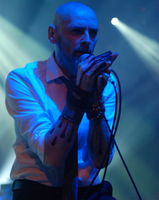 Having witnessed the onboard belly flop contest last year, (beer-gutted guys in ridiculous and/or skimpy outfits, trying to make waves, literally) there was no enticements before Raven, at 1:15 PM. Apparently social media posts made Sunday some sort of Halloween, as cosplay/dress-up costumes abounded. Had already photographed most of the acts needed, so today was planned to be a more leisurely day, re-shooting a couple of bands, enjoying the music/sun and probably sticking my nose into the On Air lounge periodically, once the Superbowl started. Things didn't quite work out that way. Another option aside from betting on one sport on one day. Do it EVERY DAY by visiting bet-bonus-codes.co.uk and take advatage of numerous betting categories like sports, casino, poker, bingo and more!

When was the last time you've (have you ever?) seen Raven bassist John Gallagher sing from a mic stand? An early adopter of technology, back in the Eighties he went to the headband mounded bar mic (ubiquitous at fast food drive throughs) to facilitate the wild Athletic Rock stage antics. So image his (and our surprise) when fierce winds whistling through his mic facilitated reverting back to "ancient" technology. To make matters worse, the mixing board apparently couldn't free up a vocal channel for John's new stationary mic/stand, thus (noticeably quite chagrined) he had to share the mic, stage opposite, reserved for his guitarist brother, Mark. Would be just the first of many pesky wind problems today.

The floor tom resonates like a ball peen hammer striking an empty steel tank! Like their initial Thursday show, newbie 'Destroy All Monsters' opens. 'Live At The Inferno' see mark prop the guitar vertically against his knee. John tries to get a sing-along going for 'Rock Until You Drop', with varying degrees of success. At The Gates frontman Tomas Lindberg, beer in hand, stands in the crowd, drinking it all in. 'Crash Bang Wallop' is no less tame, 34 years on from its release, while a mid-tempo 'Jaws Of Death, with its syncopated drums, suddenly bursts forth, John all over the stage. mark goes crazy to start 'Faster Than The Speed Of Light', pirouetting as he shreds, as John employs an ultra shrill voice. There's 'Tank Treads (The Blood Runs Red) and 'Break The Chains', although outdoors, the latter isn't delivered at the volume of old. Either that, or my hearing's not up to snuff. John switched from the Flying V looking bass, back to the beat up, red asymmetrical model seen on the back cover of their '81 debut for newbie 'Thunder Down Under' and the closing medley (snippets of Black Sabbath's 'Symptom Of The Universe', The Who's 'Won't Get Fooled Again', Judas Priest and a reprise of 'Break The Chains') before purposefully stepping on said four string, to emit bizarre feedback. As usual, once you start raven up, can't get them to stop, running over the allotted time limit by five minutes. 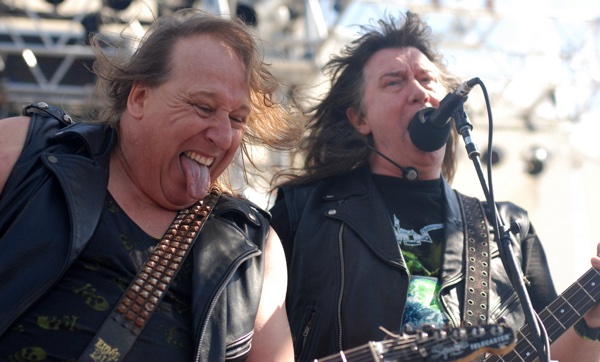 Once upon a time, I'd have been over the moon about seeing Rhapsody (Of Fire), or any other version, but as time's gone by, that thrill has dissipated. Don't get me wrong, still prefer them over the talent running concurrently, or most of the day, for that matter. An hour before, the sun was blazing, now the crew broke out hoodies and jackets. The sun gone, clouds rolling in as the wind blew faster than the band plays. Billowing his hair, Fabio Lione looked like and extra from Master & Commander, peering out over the crowd. Keyboardist/founder Alex Staropoli seemingly forgot to pack his curling iron, his poker straight hair a casualty to the elements. It was predominately an old school set, drawing heavily on early millennium releases Dawn Of Victory, Power Of The Dragonflame and the second chapter of Enchanted Lands. In fact, only the title track was offered from their latest, Into The Legend, with the opening 'Reign Of Terror' being the only other (of the ten selections aired) not lifted off the aforementioned trio. Somewhat sad to hear the pre-recorded Christopher Lee voice-over though.

The Italians finished about a quarter to four, but soon word-of-mouth confirmed that all future on deck performances were canceled, due to the wind and possible pending (but never materialized), storms. That left some of the day's biggest names without a stage, as the schedule already stretched to 2 AM, yet Sodom, Dragonforce, Bloodbath, Iced Earth and Moonspell were in danger of NOT doing a second show, none getting to be seen outdoors. For a few hours, people milled aimlessly, the vast majority not really interested in the lesser names onstage, nor able to partake in the dining hall, closed till 6 PM. Once the Superbowl started, some were appeased. More watched, either in the prescribed lounge (with free snacks) or in the casino, which also had the game on multiple screens. Tried to place a wager, but the online betting site was swamped and couldn't take my credit. Just as well, would have lost $50 bucks on the Panthers anyway!

Sort of an odd changing gears, from music mode to sports, with a hint of resignation about the whole weekend wrapping up. Rumors of a renewed/amended schedule were confirmed, with the appearance of a hastily copied "Fuck The Storm Schedule" taped to elevator entrances and other places most people congregated. The new line-up didn't start until 10pm, lasting (for the appropriately monikered Insomnium) until 4:45 AM, virtually when we'd dock, back in Ft. Lauderdale. Most of the acts would reappear on the same stage they'd played, earlier in the cruise. The one band that did make me break away from football was My Dying Bride. I'd avoided their outdoor, deckside gig, as that climate didn't seem to lend itself to the Brits, thus the big theater showing was a must!

Violin introduced, tall, bald Aaron Stainthorpe center stage in business attire, complete with white dress shirt and tie, the lengthy hair Dutch Masters look is gone, although the goatee remains. 'Your River' suddenly turns violent, dark ink/blood dripping from his finger tips, Aaron throws himself to the ground, writhing, then arms outstretched to the heavens. Upon completion, he says (in nice, proper British speaking voice), "Good evening." Yellow and pink lights meet "From Darkest Skies", whereas 'My Body, A Funeral' starts in green, then fuchsia, as piped in orchestral strings are augmented by live violin. Kneeling at the stage front, Stainthorpe delivers a spoken word rant. As the band takes over, increasing the pace and heaviness Aaron retreats to the drum rise, standing hands behind his back, before genuflecting once more. Three songs and the hour set is almost half over! A schizophrenic 'Catherine Blake' grows from gradual doom to death metal gruffness, the lights coming alive in time to the sudden/wild mood swings. For a time, the stage is bathed in white lights, shot straight at the crowd, a spoken word tape playing. Stainthorpe, on his knees, crawls from the stage edge. Newbie 'And My Father Left Forever' was aired before the classic 'The Thrash Of Naked Limbs'. A spectacle, in the glorious definition of the word. 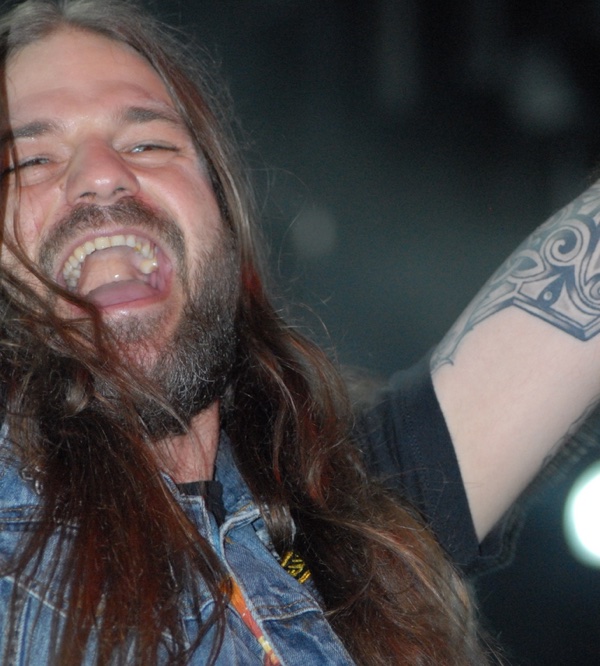 Even with all the last minute line-up chicanery, Iced Earth got a second chance to play the big theater, just a hour later than originally scheduled. In an official sleeveless 70000 t-shirt, Jon Schaffer led the band through a slightly altered set list (recall from Day 1, they had been idle for nearly two years,prior to the cruise), beginning with the previously unaired opener, 'Dark Saga'. Smile on his face, Stu Block made fun of the increasingly obvious ship's sway, mockingly over emphasizing his movements. A mix of new, old and tracks left off Thursday's performance soon follow, including 'V', 'Declaration Day' (the guitarist, legs splayed, in a crouch) and 'Boiling Point'. The jangly begun 'Cthulu' locks into a dirty groove, punctuated by Block's shrieks, especially the concluding scream, which segues into 'Dystopia', with Schaffer on backing vocals, come the chorus. The crowd takes over, sing the "whoa whoa" in 'Slave To The Dark'. A purple lit 'Question Of Heaven' has vocal accompaniment piped in, right before the tolling bell which heralds 'Burning Times'. Had to leave a bit early,as the start of Sodom overlapped by 15 minutes. 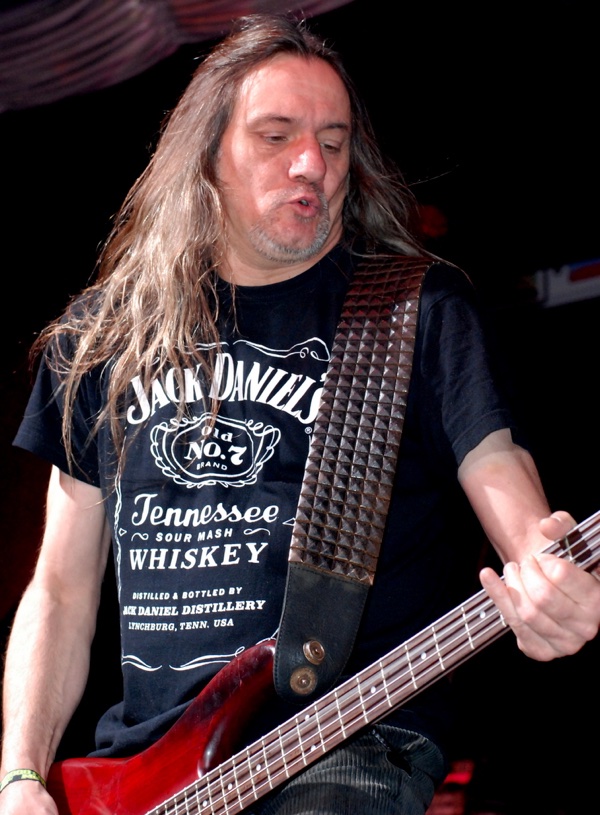 Almost midnight, as "Uncle" Tom Angelripper returned to the converted ice rink. The setlist showed an ambitious baker's dozen to get through in an hour, kicking off with 'Agent Orange'. There were stage divers from the start, careful not to get impaled on the bass, as Angelripper pointed it, like a rifle, over the heads of the crowd. It looked to be a hits filled, old school ride, with rapid fire strobes to start 'Outbreak Of Evil', followed by the 'Surfin Bird/Saw Is The Law' combo performed earlier on our journey. Just one verse into 'Saw', a circle pit formed. The bassist inquired as to how many Germans were in attendance, then greeted them in Deutsche, prior to the about face, tempo changing 'Christ Passion', one of the (comparatively) long ones. 'Sodomy & Lust' was the final oldie in the first half, leaving time for newer material, like 'M-16 (still 15 years old!) and 'City Of Gold' before opting to delve back into the vaults: 'Tired & Red', 'Burst Command Till War' and the closing pair of 'Remember The Fallen' and 'Ausgebombt'. While there were still a couple of bands, seemed a fitting way to cap off this cruise.

Plans for 2017 have already been announced, heading to Haiti, and back, between February 2nd and 6th. Make plans now to join the fun! Checkout 700000Tons.com  for updates and more information. Hope to see you there.

Previous stories and even more photos: