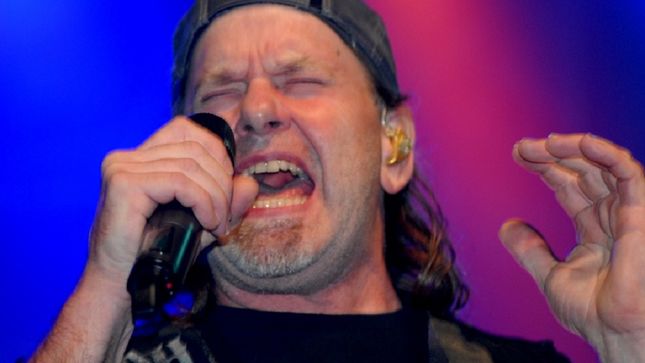 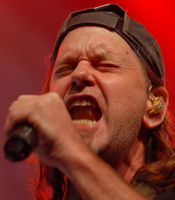 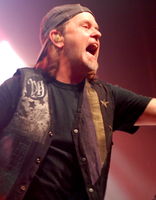 Gravitational shifts, once Jon Arch departed Fates Warning and Ray Alder took over. Of course, for most of metaldom, this is a theoretic discussion, but those of us (old fucks) that were there (and still remember), there really are TWO different bands! No offense, but stylistically, the outfit that existed with Arch behind the mic was a heavy metal band and afterwards, things skewed to a more progressive bent, although the No Exit tour (witnessed in Kent, OH, May 18 '88) was a bit of a bridge between the two. In the new millennium, there was a teaser, a half dozen tunes under the title Arch Matheos, that threatened to be the last we heard of the fabled singer, until 2016.

In a coup that's only happened once before, in Germany, ProgPower USA honcho Glenn Harveston secured an exclusive performance of the reassembled Fates Warning, playing their Awaken The Guardian (released in 1986), in its entirety, plus a dose of The Spectre Within. 30th anniversary commemorative t-shirts (at just $20) sold out quickly. Lots of gray haired and bald guys going crazy at the barricade throughout the set, which kicked right into the album, sequentially. Not some nerdy aficionado on said platter, but Arch's high pitched wail (with plenty of nonsensical syllables) sounded more than passable and for someone who reportedly has issues with being onstage, he acquitted himself quite well. He truly seemed completely in awe of the response.

Following "Valley Of The Dolls", the stage goes completely black, for a pre-recorded tape.By "Fata Morgana" his backwards ball cap was gone, exposing male pattern baldness, with lengthy locks in the back. Think comedian Gallagher. He returned with a biker's skull cap, for the rest of the night. In ProgPower history, some thought the 2004 unofficial Savatage reunion (under the Weapons Of Mass Destruction banner) was an all-time highlight. As a huge early Tage fan, this came damn close! "Guardian" begins electric, THEN brings on a pole mounted acoustic guitar, which is just as quickly dispatched. The audience is almost as loud as Arch, who is in a forward crouch, when not singing, then leaning back, he raises his hands/mic above his head, to belt out the lyrics.

Blackness onstage again, as twin leads herald "Giant's Lore" and as "Exodus" finishes, the stage is barren and tinted green. Returning to the purple hued stage, it was Night On Brocken's "Damnation" first, followed by"The Apparition" "Kyrie Eleison" (the singer genuflecting upon its completion) and "Epitaph". The entire thing was videotaped, so hopefully a lot more people will get a chance to witness this special evening.  Old school metal, at its best.