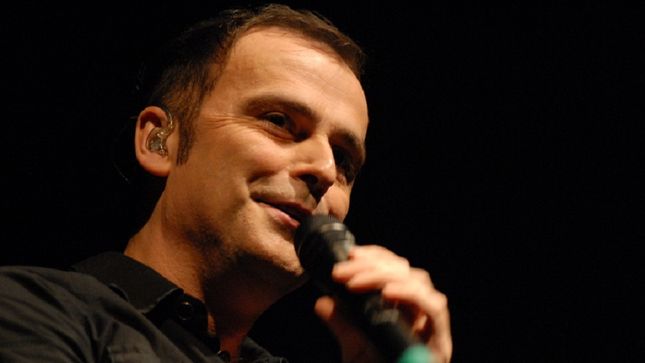 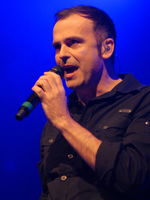 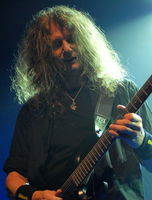 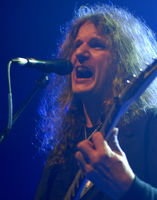 Unofficial kickoff to a North American tour, where the Germans will spend half their allotted set time running through 1995's Imagination From The Other Side. Never thought I'd hear that, in its entirety, on these shores. That said, frontman Hansi Kürsch was in fine form, chiding the ProgPower crowd with the likes of, "Are you up for a good show? Then we should have picked other songs!" When the audience broke into the "Guardian" chant, after just the first song (lengthy "The Ninth Wave"), he teased, "Never too early for that."

Following "Time Stands Still (At The Iron Hill)" and red bathed "Nightfall", it was right into the two decade's old platter, sequentially. Recalling the days of yore, Kürsch offered, "'95, we got shitfaced many times, moreso than now." "A Past And Future Secret" saw guitarists Andre Olbrich and Marcus Siepen seated, before the strobe enhanced "The Script for My Requiem" returned the aggression quotient. The crowd pretty much sang a major portion of the show, the singer could have done nothing more than used hand signals to direct the crowd. A green lit "Born in a Mourning Hall" sees Kürsch return from off stage, singing directly to drummer Frederik Ehmke. With right leg splayed in front of the left, Hansi strikes a commanding pose. The coordinated, all black outfits doing the band more favors tonight, than in the midday, Montreal sunshine!

"Bright Eyes" has never been a favorite, but for completists, had to be included. Not sure too many understood the singer's introduction, to the blue hued, proper set closing "And The Story Ends", which also concluded the aforementioned album. Everyone knew they'd return for an encore, beginning with "Valhalla". There was even crowd surfing (?), as the extended version milked every last crowd sung, a cappella lyric. "The Holy Grail" was a bit of a surprise, especially at this juncture. Once again the dual guitarists took a seat, for "The Bard's Song - In the Forest", complete with a thousand extra voices. The sometimes sardonic frontman couldn't help but smile. Leaving the stage with a rousing "Mirror Mirror” sent everyone home happy, band & fans alike.

Blind Guardian and Grave Digger will be on tour, throughout North America, for the next month. Check out a show near you!