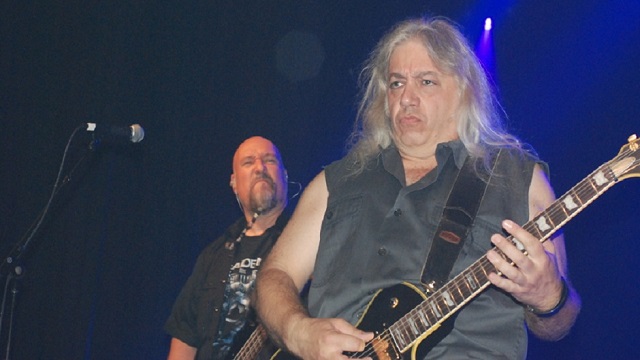 Have basically written this annual recap 16 times before, so let's try something a little different, not just what happened, but a look to the future. Still North America's festival jewel: offering fans a line-up choked with one-off exclusives and/or continental debuts, as well as an up-close experience, which includes free signing sessions and (unfortunately, a decreasing frequency of) artists hanging with the paying public, inside the venue. Some of that is down to new/young bands unfamiliar/uncomfortable with leaving the confines of the dressing room, to mingle with the fans, as most returning bands are embraced as "family". Witness members of Evergrey, who have showed up to plug their last two CDs, without even playing! However, for those with unlimited stamina and/or cast-iron livers, the nightly after-hours party in the courtyard of the Atmore Hotel, provide a chance to interact with some of the musicians.

Victim of his own success, organizer Glenn Harveston is transitioning to a younger (under 30?) crowd, bypassing the classic big names within the progressive and power metal communities (many of whom have established themselves as solo artists Stateside, often in part, BECAUSE of an appearance at ProgPower USA, and thus no longer "need" the fest's introduction), to say nothing of those increased appearance fees. Although there were rumblings of abdicating his throne, a few years back (and the future of the event, or a similar minded enterprise should all but be secure, what with Wednesday-Thursday co-promoters waiting in the wings), the line-up choices continue to expand, stylistically, with thrash (Forbidden, Over Kill, Savage Messiah) and melodic Swedish metalcore (Soilwork, Scar Symmetry, Solution 45) having been regular slot fillers over the last couple of years. Then look at the 2017 roster: global entities (just a trio of returning acts: Myrath, Angel Dust & Amaranthe, with Saturday almost entirely Swedes), the next generation of bands looking to work their way up the ladder. For the longevity and health of the fest, can't simply trot out the same names every couple of years.

Apologies in advance if your favorite band is omitted (or worse yet, criticized). It's an opinion, meant to inform/entertain, not (in)validate your listening habits. There are no universal music truths. In the metallic corner of the world I inhabit, even The Beatles, Zeppelin and U2 are overrated. Hell, apart from Glenn who hand-picks the line-up (and according to Savage Messiah, even "threatens" them with starvation, if they don't perform certain songs!) wouldn't trust anyone who says every band was good, as they either don't get out too much and/or are just a sycophant. Readers of the ProgPower forum/Twitter page know Glenn even rued his decision on one of the forthcoming artists, bowing to fan pressure, over his own tastes: March 11. 2016: "It's so hard to book a band you don't enjoy but the rest of the world does." On with the show...

Blind Guardian and Fates Warning each were reviewed separately. 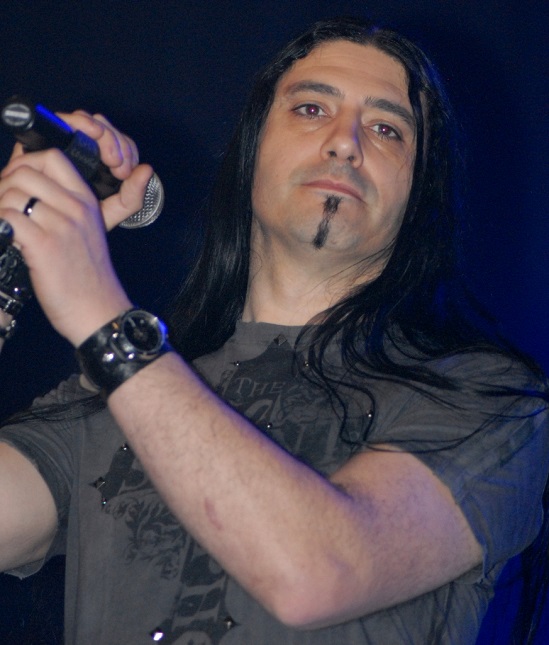 The exuberance of Aussie guitarist Chris Porcianko was infectious. Lots of headbanging and constantly in motion, for a big man, he was giddy, jumping around, moving to the front edge of the stage. Talking to him afterwards, he admitted to being enthralled by both audience participation (knowing/singing along to Vanishing Point songs) and the positive response, so far from home. It went beyond the desire to get off their island nation, to a place with similar customs and language. At one point, he offered, "Incredible! A long way from home, we definitely feel welcome." The band all donned individualized variations on an all-black (Kiwi reference unintended) color scheme. Pre-recorded intro met "Two Minds One Soul". Looking a bit like the cross of Tank/ex-Dragonfoce singer ZP Threat and Fates Warning's Ray Alder, singer Silvio Massaro toweled off Porcianko's bald head, during the solo in hard rock-ish "Season Of Sundays". Fun, for those on either side of the barricade. 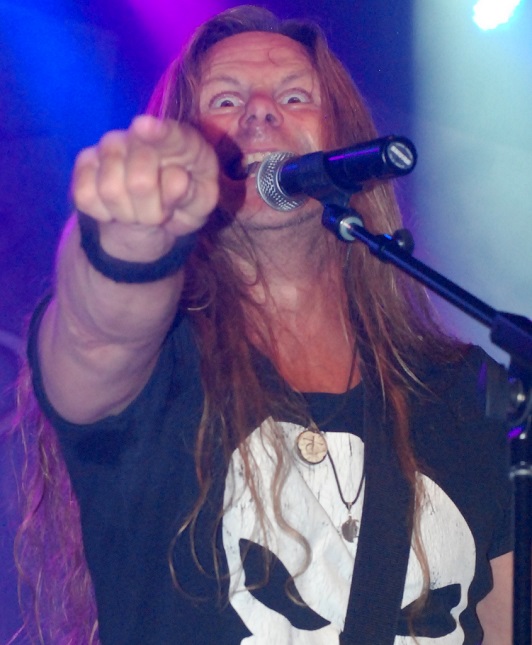 Had seen the dual guitar foursome, aka Freedom Call, a month before, in their German homeland. Felt strange without a hefeweizen in hand! Although the white stage ware (ala Angel) was ditched in favor of black, the Atlanta set was virtually the same as overseas, albeit a little longer. From the rousing "Union Of The Strong" opener, singer/guitarist Chris Bay (in Punisher tee) was very expressive, in face and hands. Bassist Ilker Ersin should have to pay Joey DeMaio royalties, for that get-up! "Babylon" and their signature track continue the upbeat melodies, before the saccharine "Farewell" kicks in. Accompanied by reds and strobe lights, they played "Hammer Of The Gods" from the recently released Master Of Light. More than a few piped in musical notes ("666 Weeks" and "Power & Glory"). "We Are One” is kitschy video game music, ala Powerglove, before everyone has a laugh at the uber Deutsche metal "Warriors", where Bay instructs everyone to answer in a strong, deep voice. 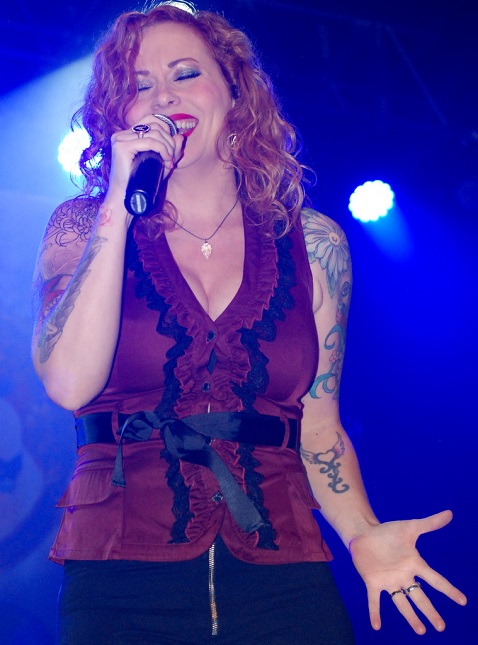 Was hoping to finally meet creative mastermind Arjen "Ayreon" Lucassen, what with Gentle Storm making an appearance, but alas, the Dutch giant (reportedly 6.5 feet or taller) didn't make the trip. To the delight of most red blooded males, former Gathering chanteuse Anneke van Giersbergen was in the house, tats exposed in a sleeveless blouse. (Throughout the weekend, she would pull triple duty, doing a special Gold badge/VIP-only acoustic solo performance the next morning, as well as help out Devin Townsend, to close the festival). Fittingly "Heart Of Amsterdam" kicked things off, with a second female vocalist (downstage from Anneke), lending credence to the GENTLE in their moniker. The Irish jig inspired follow-up "Brightest Light" would have been a more rousing introduction. Been a long time, but nice to hear her sing a couple of vintage numbers from the old band: "Eleanor" and "Strange Machines". There was an acoustic session too, just two girls, one guitar. 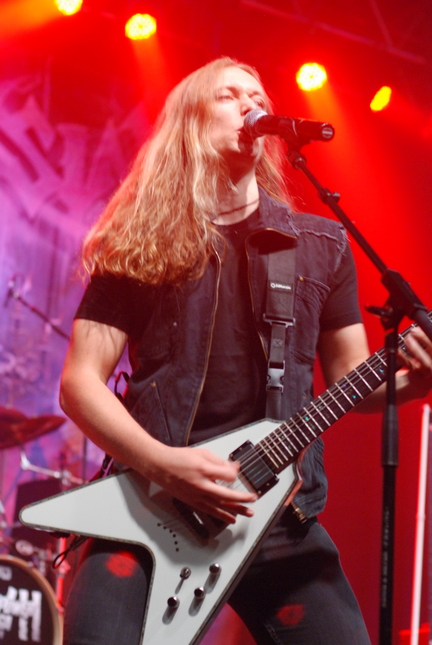 After the time capsule transported us all back to the ‘80s, for Fates Warning, the night before, British upstarts Savage Messiah began Saturday, obvious to the fact it was a prog/power metal festival. Or so it would seem, with the thrashing "Iconocaust" falling on (if not deaf) vastly indifferent ears. As the place began to fill, a few songs in, the applause warmed up. The young, two guitar foursome saw Dave Silver attempting to roam, but had to return every so often, tethered to the mic stand. The other guitarist Sam Junior, added backing vocals. Hair was flailing onstage, during the mid-tempo stomp of "The Fateful Dark". "Scavengers Of Mercy" (requested/required by Harveston) increased the speed quotient. "Zero Hour" gave way to the yellow/pulsating red lit, Judge Dredd inspired "The Cursed Earth", which saw Junior doing jump splits. Quite a few converts in the crowd today! 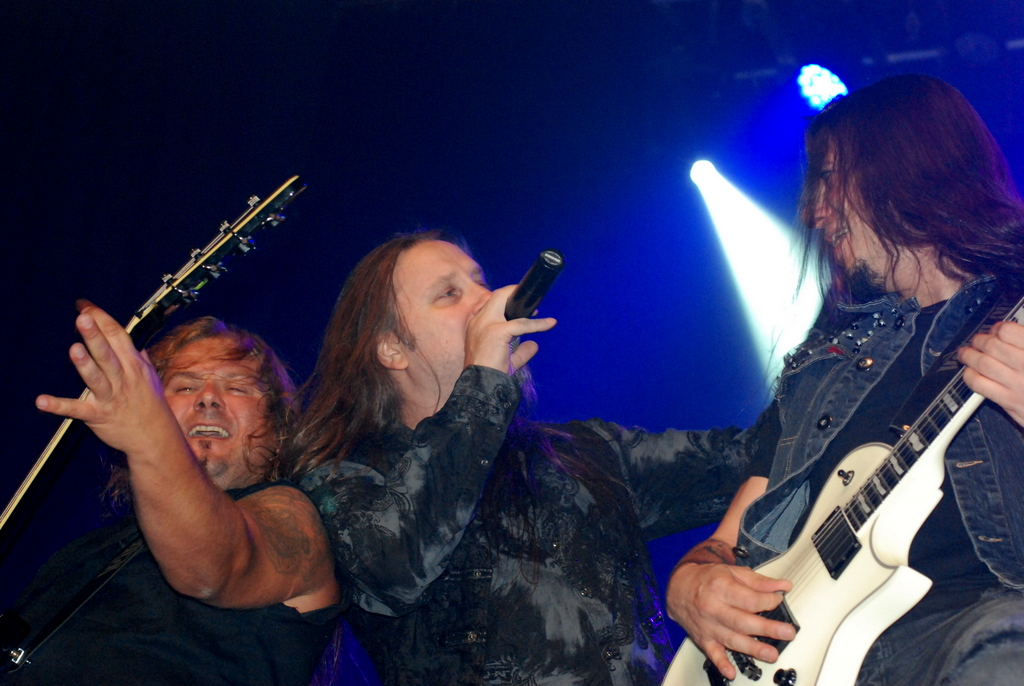 Something of a homecoming for talkative, well-traveled Serious Black singer Urban Breed (he of the shiny vinyl pants), who made repeated reference to family, friends & local supporters, from the stage. He uses his hands and mic stand (a lot like the late Ronnie Dio) to express and emphasize, while strolling the stage. An active symphonic/power metal troupe (think Kamelot), apart from the keyboardist and drummer Alex Holzwarth (Rhapsody Of Fire), the remainder of the six piece band (especially bassist Mario Lochert) zig-zag repeatedly, from one side to the the other, throughout the performance. New video track "Castor Skies" is up second. Until the start of speedy "Trail Of Murder", guitarist Dominik Sebastian wore sunglasses. Opposite side of the stage was Firewind guitarist Bob Katsionis. "Sealing My Fate" began as if destined to one of the weekend's few ballads, but then takes off. During the set, plenty of blue/purple hues, as well as lots of backing musical tapes. Left the crowd with the feel good "High And Low". 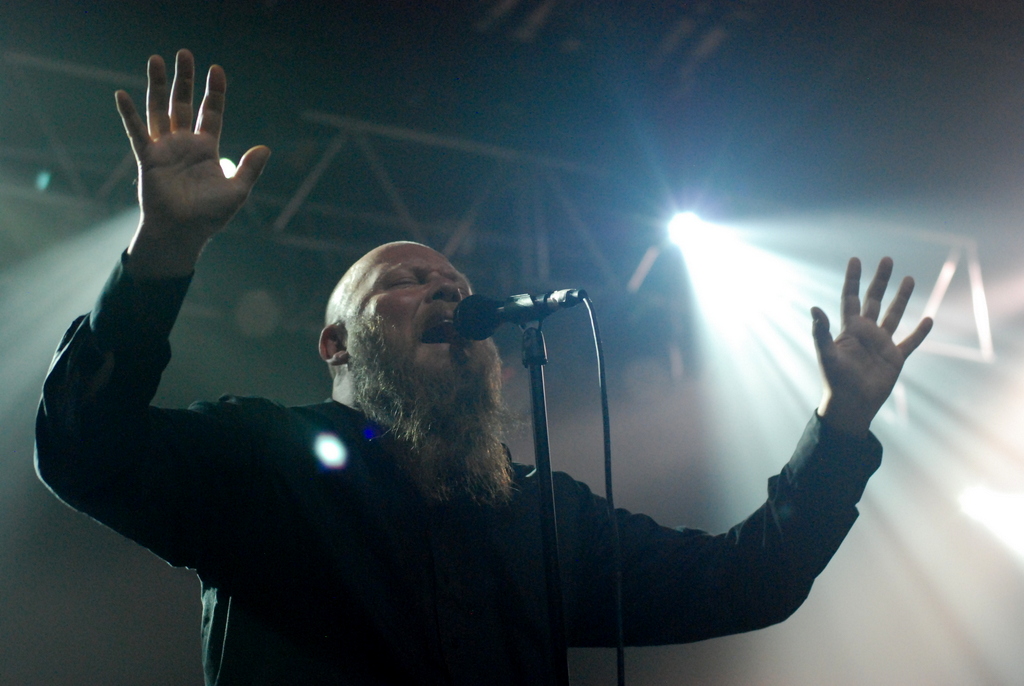 Not often you get to see/hear a band play a one-song set, but Green Carnation did just that, offering the hour long Light Of Day, Day Of Darkness in its entirety. No Tchort on guitar, childhood deeds preventing him from securing a visa to enter the USA (as has been the case with many of his black/death metal entities). Singer Kjetil Nordhus was surprised to see me backstage. Been a long while since Season of Mist sent me to Norway, to listen to the pre-release of The Quiet Offspring, during which I conducted interviews that would lead to writing their official bio. Not so much a song, as a sonic landscape, filled with many aural hues along the way. Entering to a dark stage, pierced by some white lighting, the bearded, rotund frontman was his usual animated self, almost at the expense of his compatriots. Later, the keyboardist added some lyrics, via the pitch shifting squawk box and there was a seated solo on stringed instrument (lute? buzuki?). It was a sometimes challenging, emotionally dynamic prog-rock spectacle. 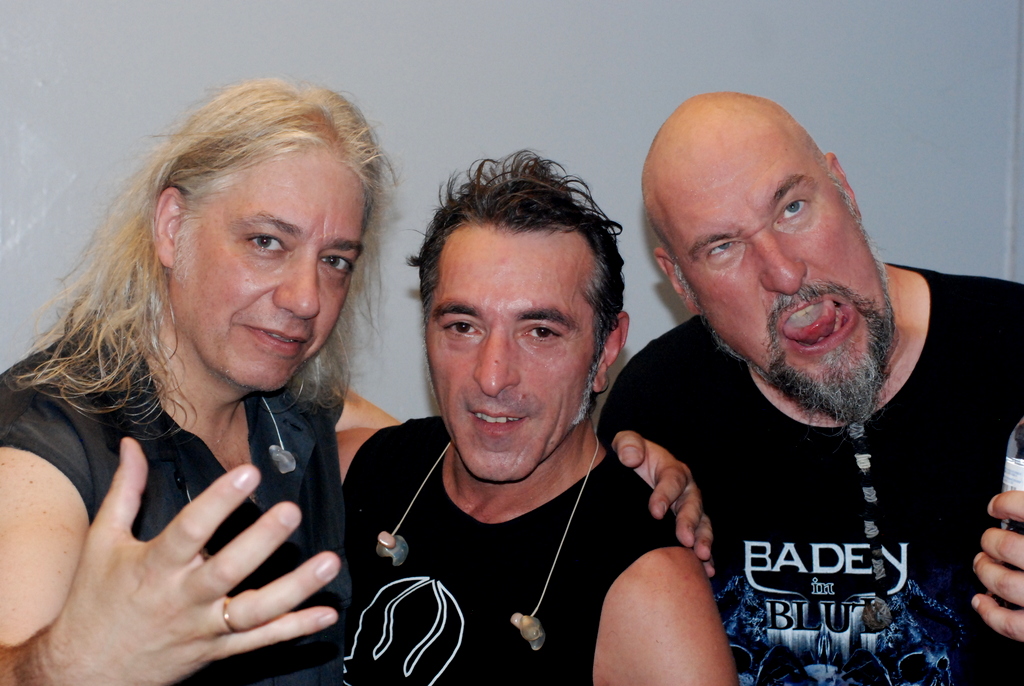 Prior to Atlanta, had seen Refuge three times in the last two years, as well as Rage twice and a special Rage vs. Refuge show in Karlsruhe Germany, where EACH band played, as well as swapping members! While bassist/singer Peavy Wagner is the lone constant, Refuge includes old pal Manny Schmidt (ex-Grave Digger). There's the dichotomy of bald, bearded Wagner, in all black, while a mop of gray hair, the guitarist sports knee length short and sleeveless shirt. Opening with "Solitary Man", the material is restricted to a five album period during (just to be confusing) Rage's lengthy career: from '88's Perfect Man to '93's Missing Link. The bassist sticks out his tongue, fist bumps his partner and basks in the (small, but boisterous) audience's response. In the hallway outside, there's a lengthy line of autograph seekers, missing most of the Germans' set. A green and yellow "Death In the Afternoon" is up early. Later, there's "Waiting On The Moon". Schmidt pulls off the guitarwork in "Missing Link" effortlessly, followed by a Wagner dedicated love song, "Baby I'm Your Nightmare". Getting ready to greet the band, coming offstage, head downstairs as they air "Don't Fear The Winter", long the final number of any show. However, the stage manager informs them there's time for one more, thus they opt for their signature tune, "Refuge".

There are a couple of other bands, including Devin Townsend with Anneke, which I saw at Tuska 2011, so instead, opted to hang w/ Refuge and assorted ProgPower friends, an important part of the overall experience.