A SOUND OF THUNDER Streaming Cover Of MANOWAR’s “Pleasure Slave” 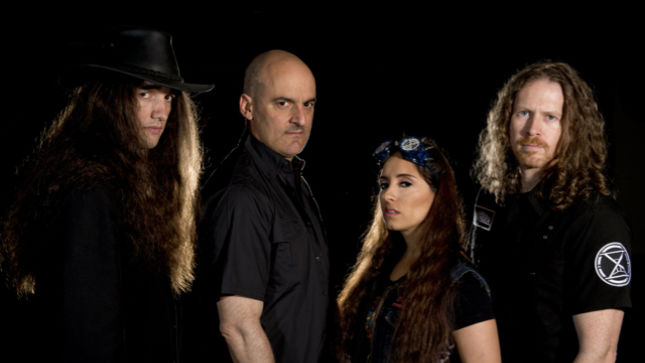 A Sound Of Thunder have released a cover version of the classic Manowar song "Pleasure Slave". The song can be streamed below. The band is offering a high-quality digital download of the track as a free bonus with its current Kickstarter campaign.

As if Manowar weren't controversial enough among metal heads, the song "Pleasure Slave", a bonus track from Manowar's sixth album Kings Of Metal, is infamous for its lyrical content.

"Joey DeMaio wrote one of the most hilariously sexist songs of all time," stated A Sound Of Thunedr vocalist Nina Osegueda.  "And that's cool, but turnabout is fair play.  This one's for you, Joey!"

"There is no greater joy than taking a hilariously misogynistic piece of music and turning it upside-down," Osegueda continued. "The composition itself is great, but I always wanted it to be a little faster. The vocals were a challenge, but I had fun using my low register more than usual. As for the background vocals, we had a great time recording a bunch of our male fans making horrible orgasm noises. I don't think I've ever laughed so hard in my life!"

A Sound of Thunder guitarist Josh Schwartz also commented on the track: "Ironically, this song has probably given me more pleasure over the years than any other.  The lyrics are so ridiculously over the top, and Eric Adams delivers them with such conviction, that I can't help but crack up when I hear it...we are talking laughing so hard I'd be in tears sometimes!  So full disclosure: we actually love Manowar and embrace their cheese, and just thought it would be fun to turn this one on its head.  Our fans paid for the production of this song so we're releasing it for free to the whole world to hopefully spread some smiles and laughter.  Hail, kill, and enjoy!"

The band recently released a video for “Tower Of Souls”.

"Tower of Souls" is the soundtrack to the first major battle between Shadowman, the hero, and Master Darque, the villain. Master Darque is trapped in a hell-like domain known as the Deadside, but is nearing the culmination of his plan to escape and wage war on the Earth. Only Shadowman has the power to stop Darque's scheme, so Darque recruits Baron Samedi, the voodoo lord of the dead, to keep Shadowman occupied. But Samedi's loyalties are not what they seem: he betrays Darque and clears a path for the final confrontation between Darque and Shadowman.

“When we wrote the song we wanted to capture the sinister nature of Darque's plot and the huge consequences involved, so we used a lot of sinister and dissonant notes and chord changes. An unrelenting triplet beat drives the song forward and gives it an almost militaristic feel. Hopefully the listener feels that he's right in the middle of an epic battle on the Deadside!”

The lyric video features panels straight out of Valiant Entertainment's Shadowman comic book series on which the song and album are based.

A Sound Of Thunder recently announced its new album Tales From The Deadside with a Kickstarter campaign that reached full funding in under 24 hours.  The full-length concept album is based on Valiant Entertainment's Shadowman comic book series.  The album was recorded at Assembly Line Studios with RIAA-platinum awarded producer Kevin '131' Gutierrez (Shinedown, While Heaven Wept, Raven).

Tales From he Deadside is set for release on September 25th. The Kickstarter campaign runs through August 17th and features many exclusive items including colored vinyl, picture discs, t-shirts, and digital bonus tracks featuring additional guest musicians yet to be announced.

Despite an imposing catalog as a solo artist and with his own Planet P Project, among metalheads Tony Carey is best known as part of the definitive lineup of Rainbow. Along with Ritchie Blackmore, Ronnie James Dio, Cozy Powell, and Jimmy Bain, Carey performed on the seminal Rising and On Stage albums. Carey's hair-raising synthesizer notes on "Tarot Woman" and haunting Mellotron chords on "Stargazer" are just some of his highlights on Rising, an archetypal cornerstone album of melodic and power metal.

"This is a very cool cover of a very cool song, by a very cool band. So that's all cool..." said Carey.  "As far as my part goes, I threw down some old-school Hammond and played a much-too-fast solo bit on a Minimoog (remember those?) and woke up on the Sunset Strip in pre-Apocalypse 1976... lots of fun, and not something I do very often. Hollywood Swingin'! Thanks for having me."

A Sound Of Thunder guitarist Josh Schwartz added: "Tony is an immensely accomplished musician and producer and I can't overstate how honoured I am to have him on our recording. His work with Rainbow only scratches the surface of his many talents. Fans will know that Tony didn't play on the original version of “Death Alley”. By adding wall-to-wall Hammond organ and his own personal style, Tony has warmed up the song and given it a kick in the pants and a very cool '70s vibe not present on the original."

The band recently announced the first exclusive KickStarter-only bonus track in their campaign - a cover of Dio’s "Last in Line" featuring Benedictum’s Veronica Freeman. Details on how to get the track can be found here. A sample of the song can be found below: 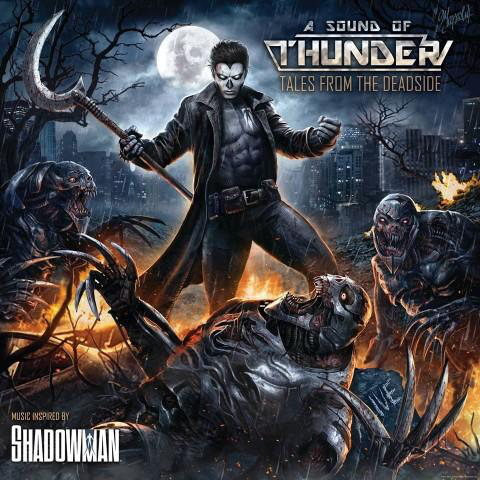 "The story of Shadowman, his alter-ego Jack Boniface, and the many characters in his world inspired us to create what we believe is our best album to date," said A Sound Of Thunder guitarist Josh Schwartz. "We let the story lead us to places our music has never been before, combining all the elements of supernatural horror, drama, action and adventure found in the comics. Of course everything has gone through our own unique Thunderous filter, and all the familiar ASOT elements will be there, Shadowman's harrowing journey demanded no less!" 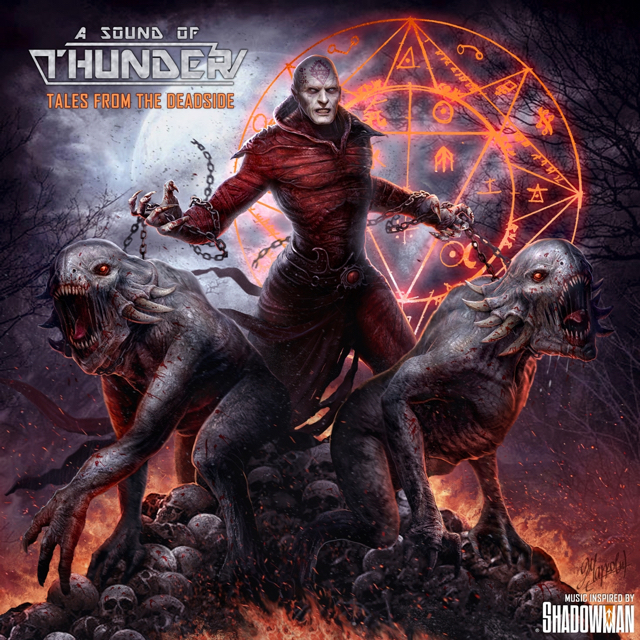 A Sound Of Thunder was formed in Washington, DC in 2009. Their most recent album The Lesser Key of Solomon was released on September 9th, 2014 via Mad Neptune Records and debuted at #43 on the Billboard Heatseeker’s Albums chart.

A Sound Of Thunder: