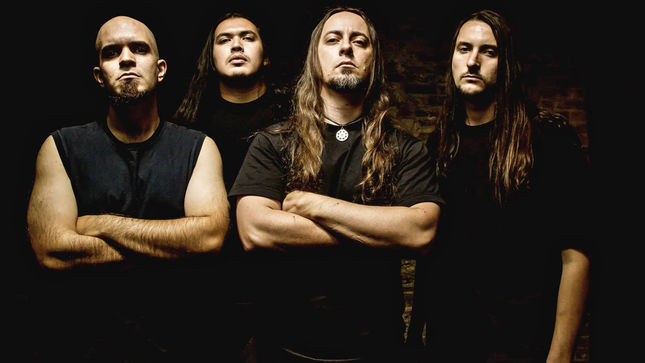 Season Of Mist have announced the signing of Abysmal Dawn. The California-based death metal stalwarts will release their much anticipated fifth album through the label.

“We’re very happy to be signed to such an awesome and respected label like Season Of Mist,” says Abysmal Dawn. “The people there are all die-hard metalheads and we’re glad to be a part of such an enthusiastic and strong team. We also have a long-standing friendship with US label manager Gordon Conrad, who originally signed us. Working with Gordon, Michael, and the other amazing people at the label was just a no-brainer. We’re very excited about the future of Abysmal Dawn these days, and judging by the new material that we’ve been working on, great things are to come.”

The members of Abysmal Dawn are currently ensconced at an undisclosed Los Angeles location, where they’re invoking the elder gods to power new material for their as-yet-untitled fifth full-length and follow-up to 2014’s Obsolescence. Early samples of Abysmal Dawn’s Season Of Mist debut demonstrate the trio’s newfound power, ingenuity, and songcraft. Certainly, Abysmal Dawn’s new opus picks up where Obsolescence left off, but it promises so much more.

Formed in 2004, Abysmal Dawn quickly impressed on fan and band alike. The group’s three-song demo landed Abysmal Dawn a contract with Arizona-based Crash Music. Within a year, the group were holed up with engineer John Haddad (Intronaut, Hirax) at Shiva Industries recording their debut, From Ashes. Released in 2006, From Ashes was praised for its tactful balance of brutality, melody, and atmosphere, earning heavy praise from media outlets. Follow-up album, Programmed To Consume, again engineered by Haddad, was released in 2008 following a higher profile deal with Relapse Records.

After subsequent tours, the group wrote the successor to Programmed To Consume up through the recording sessions at Artisan Road Studios (with producer Mike Bear) and Trench Studios (again with Haddad). Titled Leveling The Plane Of Existence, Abysmal Dawn’s third album broke new ground with fan and press alike. Clearly, Abysmal Dawn’s bridging of death metal eras, songwriting prowess, and growing social buzz was eliciting the type of response for a band on their way up. Subsequent tours were successful in establishing Abysmal Dawn as one of America’s leading death metal acts.

Leveling The Plane Of Existence was followed by Obsolescence three years later. Abysmal Dawn were dead set on perfecting their brand of death metal. So, they set out to write an all killer, no filler record. Producer Bear and engineer Haddad were brought onboard again to track Obsolescence. What had worked mercilessly (the production) on Leveling The Plane Of Existence was in no need of change. The result of Abysmal Dawn running on all cylinders and their production team dialing in on the group’s distinct sound resulted in a death metal powerhouse. Four albums in, Abysmal Dawn weren’t just proficient in the finer arts of death, they were proven masters of it.

As a new age sets upon Abysmal Dawn - the Angelenos are entering their 13th year - there’s no turning back. The group aren’t interested in throttling down on their quality commitment to death metal and they’re certainly not ready to let their legion of fans down by shifting gears into death metal-lite. A new label deal with Season Of Mist and the beginnings of a pivotal death metal album in their hands, Abysmal Dawn are the future.