ANNIHILATOR Frontman JEFF WATERS Pays Tribute To ALEXI LAIHO - "We Lost Somebody Who Was Old School; He Was Fantastic" 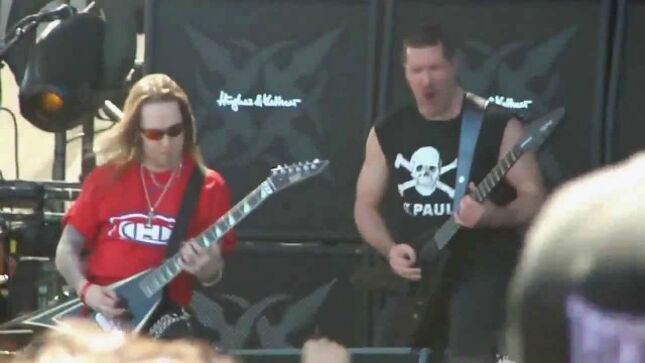 The metal world was shattered this week with the news that Children Of Bodom / Bodom After Midnight frontman Alexi Laiho has passed away. He died in his home in Helsinki, Finland, last week. Laiho had suffered from long-term health issues over the past couple years.

Annihilator frontman / founder Jeff Waters has posted the following message followed with more thoughts from Waters in the clip below.

"The world lost another lead guitar giant and a good person. So much I could write... he was a friend and was in contact with me often since 2006; often with the same question: 'How did you quit drinking and stay quit?' Many of you know our legendary 70k Tons of Metal cruise karaoke jams... that would be all I need to remember him by!

But in the last week, I posted a vid of us singing away, then thought of him two days ago, then this morning, I was mixing some stems for a re-release surprise. I sat down this morning to work on the next song... it was Annihilator's 'Downright Dominate' featuring Alexi Laiho and I shredding a trade-off solo thing. Then a facebook message came in saying he passed away.

Uggghhhh... please, musicians... take care of your health. Eddie then Alexi? Stop it."