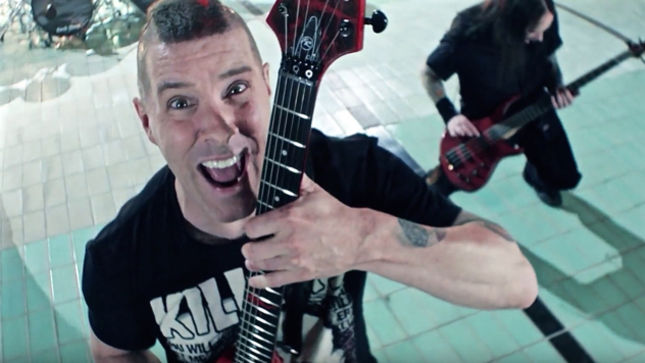 Canadian metallers Annihilator have re-signed with UDR Music, and have announced some new release details. Band leader Jeff Waters fills us in:

“Well, 2015 is almost over and myself and the guys want to wish everyone a great holiday season and also to thank everyone that enjoyed our latest CD, Suicide Society, and/or recent Europe Tour! We are working on Part 2 of the tour now and expect to make an announcement on dates in mid-January. That announcement should include Russia/Danish/German dates that were cancelled by the Lufthansa strike, a venue issue and one night off for a bad throat!

“Also, while I can't confirm and give details, there is "rumor" of discussions to film our first full-length, full production BluRay concert. Tentatively aiming for April and we will likely do it in Germany. It would be a very special event for fans, as we are (apparently!) discussing all the ways to make it so!

“Another project in the final stages of confirming is something that many of you have been asking for a long, long time... a full CD/DVD of a dozen or so acoustic songs. There would be six musicians involved in this live acoustic show but we are thinking of doing it live in my recording studio in Ottawa; something along the lines of the bonus acoustic video material on the latest Van Halen release.

“South American touring is in the planning stages, as well as summer 2016 in Europe again. Yah, I know: where the fk is the USA/CAN touring? Still trying to make that happen.

“So for the best news here: We just re-signed to UDR Records for another two studio CDs! That will put us at 17 studio CDs when that deal is over! Add that to the mega-package(s) we are planning in 2016 and it's gonna be a fantastic four more years with them, us and the fans!

“Special thanks to label boss Ulrike Rudolph, A & R Jay Lansford, Tour Agent Thomas Kreidner, Tour agency boss and Wacken boss Thomas Jensen, Faithful Lawyer Thomas Schlegel and all involved in the dealings... thanks again to all the fans, friends, families' and partners who made this a killer 15th studio record cycle so far... it went beyond expectations for all involved!

Hughes & Kettner caught up with Jeff Waters before Annihilator’s show at Luxembourg's den Atelier venue in November 2015 and he showed them his Hughes & Kettner GrandMeister 36 setup, his ergonomic pedalboard and the other little bits and pieces he needs to get an Annihilator crowd whipped into a frenzy. Watch below:

Hughes & Kettner also did a full sit-down interview with Jeff later on that day, where he told them all about his favourite guitar amp recording techniques, plans for the next Annihilator album, and a whole lot more! Watch the interview below: