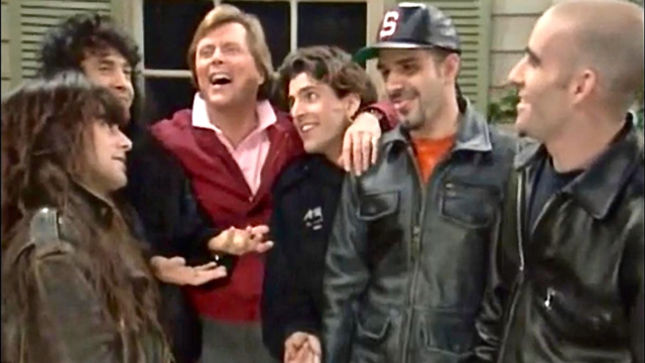 In this episode of Full Disclosure from Louder Noise, Anthrax discuss their appearance on a 1992 episode of Married... With Children and how Scott Ian missed out on his chance to have sex with the character Kelly Bundy.

Anthrax are due to release their new album, For All Kings, on February 26th. Metal Wani writer William Richards had an opportunity to chat with frontman Joey Belladonna. In the audio interview streaming below, he discusses the new album, life on road, live response from fans to the new material, how diverse the album sounds with lots of groove, why they didn’t try to repeat the formula on previous albums and much more.

For All Kings album details can be found below.

For All Kings tracklisting:

CD1:
“You Gotta Believe”
“Monster At The End”
“For All Kings”
“Breathing Lightning”
“Suzerain”
“Evil Twin”
“Blood Eagle Wings”
“Defend/Avenge”
“All Of Them Thieves”
“This Battle Chose Us”
“Zero Tolerance”

Drummer Charlie Benante promises that the eleven-song For All Kings will be "aggressive and super-thrashy”. The album was written by Benante, bassist Frank Bello, and rhythm guitarist Scott Ian, the dynamic triumvirate whose unique composition chemistry is, in part, what sets Anthrax's music apart from other bands' in the same genre. Add to that Joey Belladonna's breathtaking vocals and the searing guitar leads by newest member Jonathan Donais, and it's no wonder the band is so excited for fans to hear what will be their 11th studio album.

"Breathing Lightning” from For All Kings can currently be heard on FM and Satellite radio. In the clip below, Frank Bello, Charlie Benante and Scott Ian talk about the writing and recording of the song.