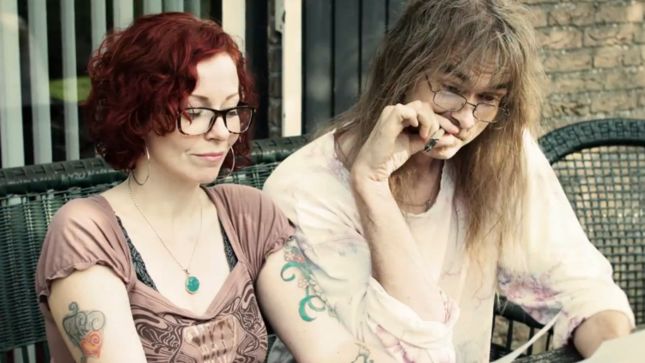 Arjen Lucassen (Ayreon, Star One, Guilt Machine) and Anneke van Giersbergen (The Gathering, Devin Townsend Project) will release the debut album, The Diary, from their new band The Gentle Storm, on March 24th.

In this first behind-the-scenes update from The Gentle Storm, Arjen explains how he and Anneke came to work together, and you'll see a glimpse of Anneke recording her vocals at the Electric Castle.

The album concept is a tale of love, loss, and separation told through the story of two fictional seventeenth-century lovers. A Dutch sailor embarks on a two-year voyage, leaving his wife at home in Holland.

The only way for the couple to communicate and keep their love alive during the long separation is through letters. These letters form the basis for the songs on the album.

They are also pleased to announce that in advance of The Gentle Storm full band shows, Arjen will join Anneke for a select few European live acoustic dates in what will be quite a rare and special occasion.

As previously mentioned, a full all-star band will go out without Arjen in March and April. Check out the live itinerary at this location.