AVANTASIA Mastermind TOBIAS SAMMET Looks Back At Metal Opera Album Recording Sessions - "I Hate The Aesthetics Of Cables, Feedback, And The Melange Of Mold, Cigarettes, Sweat..." 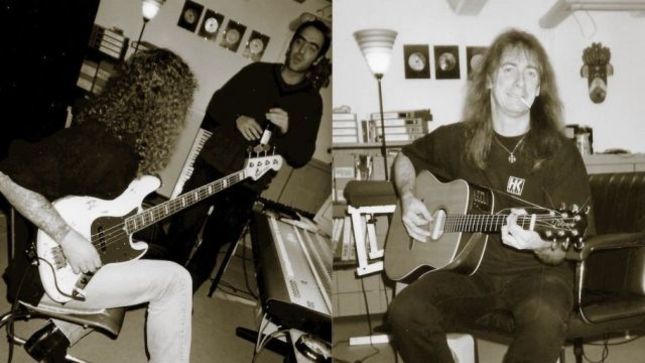 Avantasia mastermind / Edguy frontman Tobias Sammet has posted a photo from the Avantasia archives along with the following message:

This was working on the Metal Opera I+II in the late '90s. Markus Großkopf (the bushy tattoo incarnate on the left), engineer Norman Meiritz and the lovely Henjo Richter. Rhön Records Studio in Fulda was very limited technically, not fancy at all. And the room itself sounded quite not so great either (7ft untreated concrete ceiling, eh?!), to put it nicely. But Norman made it a cozy working retreat and the chemistry was great. It would later cease to be a studio and we've rented the building since then so it would be our rehearsing room with Edguy. Which I've been always met in only very rarely because honestly: I hate rehearsing rooms! And I hate band rehearsals! I hate yelling against distorted music and I hate the aesthetics of cables, feedback and the melange of mold, cigarettes, sweat and rotting sound treatment foam on the walls. This is also why I built myself my own very cozy little studio with a great, great, great sounding room and analogue outboard gear. It helps staying sane by doing my stuff in these isolation days.

Yet, I remember in the years 1997 to 2003. I spent more time with Norman Meiritz at Rhön Records Studio than with anyone else in my life back then. I was there constantly. All the time. Sundays, 16 hours, no problem (except for his lady, maybe…). It was Edguy-Avantasia-Edguy-Avantasia-guest appearances. We constantly worked on something. What a lovely guy, credit where credit it's due!"

Sammet recently checked in with a progress report on the new Avantasia album:

"Cheers from my little electric wonderland. New Avantasia in the making. Sounds great, too many songs, it's hard to pick the right ones. Isolation does strange things to artists! Things goin' great, but it won't be finished this year. So many ideas, but I want every single line, every single word to be descriptive of what I envision it to be. I love the ride, and yet it's demanding! I still don't understand how people cannot pay attention to lyrics, it's the heart of every song and 50% of the magic. Fire desire flames burning higher... I mean, seriously????!"