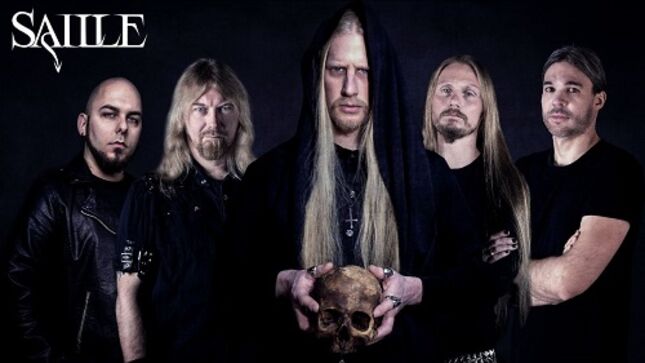 Ssille's fifth album V will be out April 9, 2021 on CD/Digital formats via Black Lion Records.

Playing blackened death metal, Saille built a firm reputation for their impressive live performances on festivals all over Europe in the past years. Saille is a five-piece, with members residing in The Netherlands, Spain and Belgium.

The fifth full-length album of Saille, entitled V, is another landmark in the band’s existence. After a rough period of time, Saille felt the need for a dramatic make-over, seeking a deeper darkness, both live and in the studio. Visually and sound wise Saille improved immensely and a new frontman from the Netherlands was announced. Jesse Peetoom is two metres of charisma, musical talent and vocal power.

The artwork for V, which can be seen below, was drawn by French artist Vincent Fouquet of Above Chaos (Inquisition, Tsjuder, Kataklysm).

Lyrically, Saille deals with "The fearful, the uncanny and the weird. Therefore, the album contains eight creepy tales, sarcastic stories with somewhat funny twists. It will make the listener quiver and shiver, with a grin on their face."