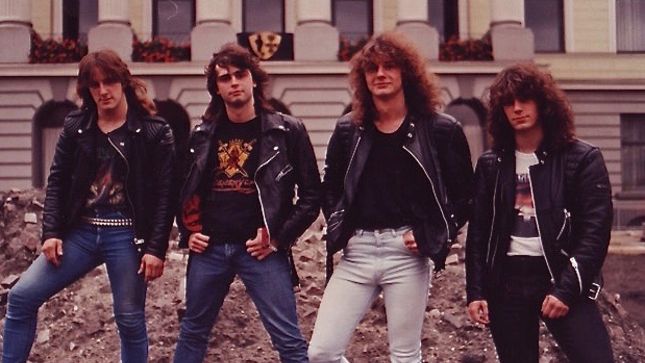 Germany-based progressive power metallers Blind Guardian recently re-released their first four studio albums. Today they start the pre-order for the next reissues, Imaginations From The Other Side, Nightfall In Middle-Earth and A Night At The Opera, which will be released on November 30th via Nuclear Blast. The back-catalogue has been remixed and remastered, and is available in 2CD-digi and 2LP gatefold vinyl format with individual colors.

More reissues are due to follow, in total there will be 10 Blind Guardian re-releases.

Singer Hansi Kürsch comments: "All these albums will not only be available as beautiful 2CD-digipak versions but can also be purchased as gatefold vinyl. Since the vinyl versions of our back catalogue have become so rare over the years, people have kept on asking us about re-issues. Now your wish is granted. The CD version will contain two CDs. One will feature an up to date sounding re-mix and the other will contain the original mix. Both sound great! In comparison to the original mixes, our input on the re-mix versions has been far greater, and therefore have been used for the vinyl versions. They sound fresher, richer and more exciting than the original ones and still pay tribute to the original recordings. It is 100% old school Blind Guardian with a modern twist. What more can you ask for?."

The band have also revealed their first historical episode/documentary chapter in which they talk about their early days. Hansi Kürsch comments: "If you always wondered how Lucifer's official successor turned in the mighty Guardian then listen to these six wise men speaking. Enjoy another round of facts, myths and long-forgotten gossip."

The previously mentioned reissues can now be pre-ordered in the following formats:

Bonus:
"Age Of False Innocence" (demo)
"Under The Ice" (demo)