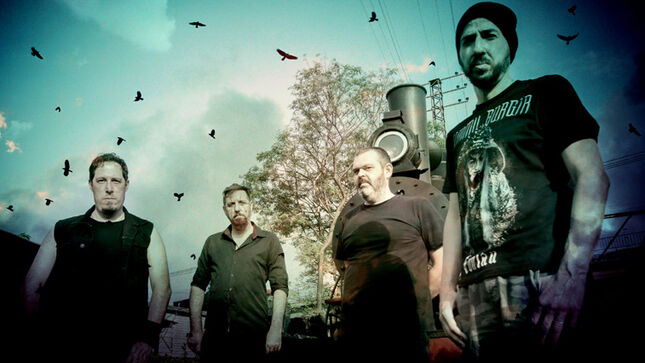 Since returning to active duty in 2018, Brazilian thrash metal band, ChaosFear, have released several singles, EPs and especially Be The Light In Dark Day", an album that clearly showed a significant evolution of their old thrash metal sound into something more dense, melancholic and modern, bringing more technical layers, somber and cadence to the compositions while keeping both feet firmly planted in the purest heaviness of the genre.

Now, following the premise of not being stuck in any comfort zone and breaking all the rules, standards and paradigms within the band's sound, Fernando Boccomino (vocals/guitar), Eduardo Boccomino (guitar), Marco Nunes (bass) and Fabio Moyses (drums) will return with new material in their latest, emotionally charged conceptual EP, titled Aeternum.

Aeternum, scheduled for release in November 2, All Souls’ Day, will be a giant leap in ChaosFear's growing career over more than 20 years, bringing conceptual lyrical content based on the grief, pain and anguish that everyone went through over the last year, especially the Boccomino brothers who lost very close and dear ones, incorporating symphonic, dense and even more melancholic sounds never heard before in a band's work, such as guitars, keyboards and cellos.

"Until Your Last Breath"
"Eternally"
"A Pit Of Sadness"

"Until Your Last Breath"  features Jose Cardillo (Holy Sagga/Eye Of The King) on ​​keyboards.

"We are a band that is not afraid of taking risks! Our art is fed through new challenges and this new work is another new beginning for the band", commented Fernando Boccomino. Recorded at Tori Studios, in Sao Paulo, "Aeternum" was produced, mixed and mastered by the band's bassist and producer, Marco Nunes, co-produced by the four musicians and with cover art by Jean Santiago (Santart). "Amidst the writing process, our mother died. We even thought about taking a break from recording, but we thought that the best solution would be to continue working and dedicate all the lyrical content of the EP to her", concluded Fernando.

"Never has a Chaosfear release portrayed a determined period of time so well, with losses and mourning, but also one of perseverance and hope", commented Marco Nunes. "Musically, we took the arrangements to a new level, adding parts with piano, guitar, cello, which had already appeared more modestly on our previous album. Baker did it on Queen's A Night At The Opera and Terry Brown on Parallels by Fates Warning", bringing many layers and things happening so the listener can discover details with each new audition in a kind of sound journey" , explained Marco.