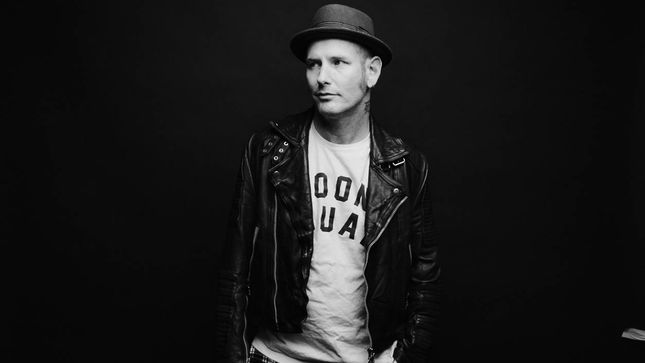 Grammy Award-winning singer / songwriter, actor, and New York Times Best-Selling Author, Corey Taylor has shared a live performance of his single “Samantha’s Gone”, which was captured during his groundbreaking Forum Or Against ‘Em global streaming event at the iconic Los Angeles venue, The Forum.

Originally broadcast on October 2nd, Forum Or Against ‘Em, saw Taylor and crew blaze through a 23 song setlist, including every song on his debut solo album CMFT, songs from the Slipknot and Stone Sour catalogues, and several covers.

Additionally, fans can watch a full performance of "Halfway Down" from the evening as well.

Taylor recently made history as he reached #1 at Active Rock Radio with his powerful single “Black Eyes Blue”.  The achievement put Taylor in a class all his own, making him the first artist in the history of the format to reach #1 with three separate projects, following chart-topping efforts from his band’s Slipknot and Stone Sour. “Black Eyes Blue” is featured on Taylor’s acclaimed first-ever solo album, CMFT which is available is available now on all streaming platforms.

CMFT made impressive debuts on charts around the world this month entering at #1 on Billboard’s Current Hard Rock Albums chart, while claiming #2 on Current Rock Albums, #6 on Vinyl Albums, and #9 on the Top Albums charts.  Furthermore, CMFT landed Top 10 on the official album charts in Australia,  Germany, Switzerland and Austria, with Top 20 debuts in the United Kingdom, Finland and Japan (international chart).

CMFT has been a long time coming for Taylor, with newly written tracks alongside some dating back to his teens. Recorded at Hideout Studio in Las Vegas, with producer Jay Ruston and his band—Christian Martucci [guitar], Zach Throne [guitar], Jason Christopher [bass], and Dustin Robert [drums]— the album traces a wild and exhilarating roadmap through Taylor’s musical psyche.