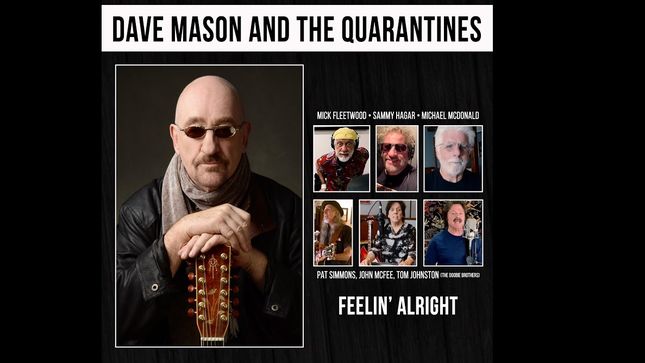 Dave Mason and friends have taken the downtime during quarantine to remake one of Mason’s most iconic and heavily covered songs since its release in 1968 - “Feelin’ Alright”.  Dubbed “Dave Mason And The Quarantines”, the group’s new song features Mason singing along with Mick Fleetwood, Sammy Hagar, Michael McDonald, and The Doobie Brothers: John McFee, Tom Johnston, John Cowan, and Pat Simmons. Dave’s longtime drummer, Alvino Bennett, also lends a hand as does Pat Simmons Jr., Pat’s son, joining in the fun.

You can watch the performance here exclusively via SiriusXM below until Friday, July 24. You can also watch it on the SiriusXM app and hear it on Classic Vinyl (Ch. 26) now.

“Feelin’ Alright” is one of the most covered songs today, with some 50 different acts giving their take on the international hit, including such artists as Joe Cocker, The Jackson Five, Lou Rawls, John Belushi, Three Dog Night, Gladys Knight and the Pips, Grand Funk Railroad, ELO, Freddie King, Widespread Panic, The Black Crowes, and many more.

Mason penned the song at the young age of 22 while alone on the Greek island of Hydra writing new songs for the second Traffic album.

“Who would have thought that this would go on to be covered by so many different artists and bands, you just never know,” reminisces Mason. “But what I do know today is that people need some hope and comfort and especially music, which is why I called up some friends to re-record a special version of the song. To do this remotely was somewhat challenging, hence the name ‘The Quarantines’, but the spirit of strength, hope and heart prevail.”