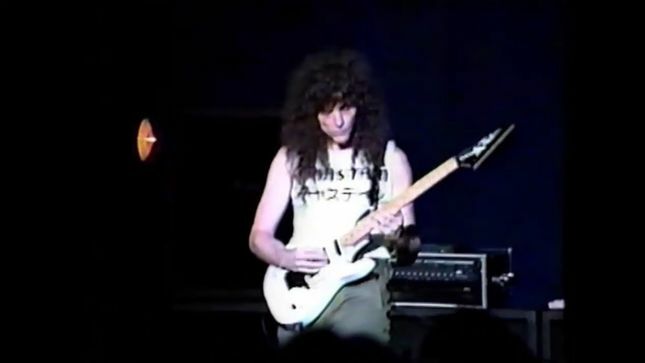 Guitarists David T. Chastain, Vinnie Moore, Mitch Perry, Michael Angelo, Kurt James, and Joey Tafolla participated in the legendary first Guitar Heroes Tour in Japan in the late '80s. Each guitarist played a set and had an onstage interview. Then all the guitarists joined up on stage for a late night jam session. The video below features David T. Chastain's performance of the track "Spontaneous Combustion" and following onstage interview.

Leviathan Records - the label owned by Chastain - recently uploaded a new video clip along with the following message:

"Chastain - Leather Leone on vocals, David T. Chastain on guitar, Mike Skimmerhorn on bass, Les Sharp on drums, and special guest Pat O'Brien on guitar - toured the United States in support of their The 7th of Never album. The last night of the tour they played Harpo's in Detroit. Unbeknownst to the band someone was shooting an unsanctioned video of the band. That tape was traded and sold in the metal underground for years. We decided to take that tape, remaster it and put it in HD so it could be officially available for viewing."

"Intro / We Must Carry On"
"Ruler Of The Wasteland"
"Paradise"
"The Wicked Are Restless"
"827"
"I Fear No Evil"
"The King Has The Power"
"Living In A Dreamworld"
- Les Sharp drum solo -
"I Can See Tomorrow"
"Forevermore"
"Fighting To Stay Alive"
"There Will Be Justice"
- David T. Chastain guitar solo -
"The Black Knight"
"When The Battle's Over"
"The 7th of Never"