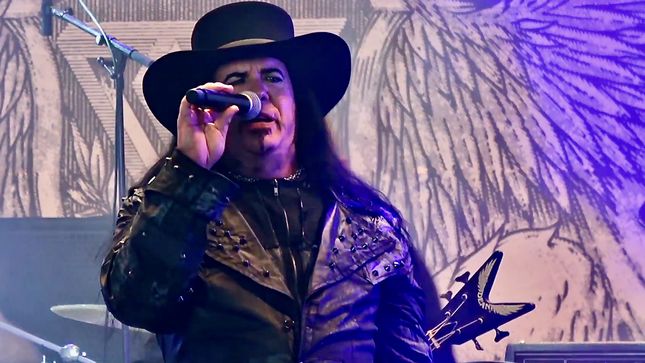 I Am Morbid: Ten Lessons Learned From Extreme Metal, Outlaw Country, And The Power Of Self-Determination, by David Vincent with Joel McIver will be available via Jawbone Press in February.

"I didn’t want to write a conventional autobiography. You know the kind of book I mean, where a rock musician gets famous, falls from grace (ha!), and then recovers after some kind of redemption. I’ve been through some of that stuff, but I like to think there’s more to my years on the planet than the old familiar tale. Many of those stories seem to be about drugs, addiction, rehab, and relapse, but that was never my issue. My challenges weren’t any less challenging than anyone else’s; they just manifested themselves in different ways. This book is about what I’ve learned, which is a lot, but never enough." - David Vincent

I Am Morbid tells the astounding story of David Vincent. Written with the bestselling author, Joel McIver and with a foreword by Rosetta space mission project scientist, Dr. Matt Taylor, it’s an autobiography that transcends the heavy metal category by its very nature. Much more than a mere memoir, it’s an instruction manual for life at the sharp end; a gathering of wisdom distilled into ten acute lessons for anyone interested in furthering their fortunes in life.

I Am Morbid will be published in paperback and ebook formats in February 2020. It will also be available in a deluxe hardcover collector’s edition, strictly limited to 100 copies - of which, full details to be announced soon.

Exclusive excerpt from I Am Morbid...

"I remember on one occasion we were driving through rural Kentucky and we stopped at a truck stop. At the time, we’d just gotten our very first royalty check for Altars Of Madness, and as a result we all had several thousand dollars in our pockets. You can imagine the locals’ reaction: we were essentially a bunch of long-haired Neanderthals, and we all had a load of cash, so the staff of the truck stop assumed we were drug dealers.

"It was profiling, of course, but we were in a rural area, where people thought what they’d been trained to think. They called the police after we left and suggested that they check us out, and so we were pulled over a few miles down the road. The cops said, “We’re going to search your bus,” even though I told them that they had no probable cause to do so. In addition, they had a police dog that they wanted to sniff around for drugs, but our pit bull Butcher wasn’t about to let their dog do any such thing, because the bus was his home.

"Butcher was very formidable, but the police insisted on doing this even though I pointed out that our dog didn’t want their dog on the bus. They told me, “You’d better get ahold of your dog or we’re gonna shoot him,” so to move things along we harnessed Butcher up and took him out of the bus, which was difficult because he was target-locked on the police dog. He was going to kill him if he could: I had to walk him quite a way away and sit down with him in order to distract him from the other animal.

"In the meantime, the police searched the bus and asked why we had so much money. We gave them a smartass answer: that we worked for a living. They replied that we had an unusually large amount of cash on us, so we explained that for us, it wasn’t an unusually large sum of money because our royalty checks only came in twice a year. In the end, they detained us for 45 minutes and went on their way.

"It didn’t stop there. We were Southern guys, so we always had guns with us. But we were also young, inexperienced guys, so we didn’t do our due diligence about what the various gun laws are in different states. To buy a gun in Florida in those days, you simply had to be of a certain age and present a driver’s license showing that you were a resident of the state, and you could buy whatever you wanted. You didn’t need a permit as well. Of course, that’s not the case everywhere, as we soon found out.

"One night in New Jersey, we spent the night sleeping in a rest stop on the side of the highway. The following morning, the state highway patrol noticed our bus and pulled us over. Now, we used to burn a lot of incense on the bus because we didn’t have air-conditioning and the smell got pretty rank, and we had Butcher to add to the aroma. When the police officer walked on the bus, he smelled the incense and incorrectly judged that we were smoking marijuana. So he looked in an ashtray, and what did he find? Live shotgun shells..."