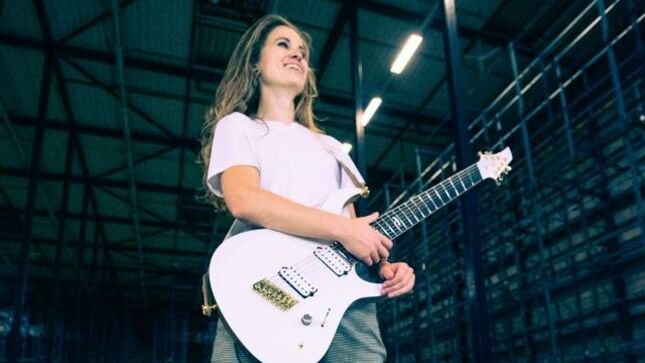 Former Delain guitarist Merel Bechtold, who left the band in June 2019, has launched Dear Mother with vocalist David Pear and drummer Joey Marin de Boer. They have released their first single, "12 Years In Exile" and the official video is available below. A second single will be released soon and Dear Mother debut album will be released some time in 2021.

Check out Bechtold's guitar playthrough video for "12 Years In Exile" below.

Delain issued the following band statement when Bechtold announced her departure from the band:

"Today we are sharing the news with you that Merel has decided to leave Delain and focus on different musical ambitions. Merel’s performance with us at Graspop will be her last show as a permanent band member of Delain. We are aware this is very short notice, and this we regret for those of you who wanted to catch a last show with her as a part of the team. However, this is a friendly departure, and we are respecting Merel’s wishes in doing so. We had an amazing ride sharing the stage with this fireball and we are excited to see the results of her new endeavours."

"Although we will miss Merel on the road with us, we realize that our busy schedules require loads of time and commitment, and we understand and respect her decision to focus on her own path. We will continue performing live as a five-piece as before, and look forward to finishing the work for our upcoming studio album, the upcoming festival season, our US tour with Amorphis and Anneke van Giersbergen and our European Masters Of Destiny Tour. We hope to see you all soon! Thank you Merel, we wish you nothing but the best!"

Bechtold issued the following statement on he decision to leave Delain:

"After almost five amazing years the time has come for me to focus on my own dreams. Because of my previous band commitments my attention diverged from my own music and the path I want to follow, and I feel I need to give myself the time and opportunity to explore my musical ambitions. This is probably the hardest decision of my life, but in the end it’s important to follow your heart and be happy. I want to thank my bandmates and crew, I will miss you dearly! Also huge thanks to all the amazing people I’ve met on the road. And most importantly I want to thank YOU for all those amazing and warm memories! It’s been a pleasure."