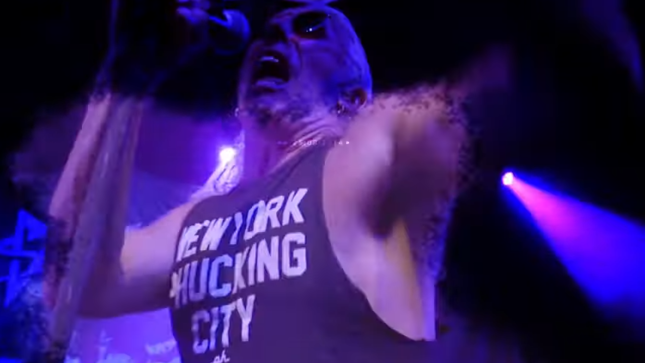 In the new clip below, Twisted Sister singer Dee Snider is teasing a new single and video called "Prove Me Wrong", which will be released on May 19th. Expect more information to be revealed next week.


Earlier this week, Snider virtually invited AXS TV into his retreat in Belize for an episode of At Home And Social Online. During their chat, which can be seen in its entirety via the video below, Dee spoke about his current activities. An excerpt has been transcribed as follows:

"Last year, I decided — I told my management I'm taking 2020 off," said Snider. "And they were, like, 'What? You're not gonna book any shows?' And I said, 'No shows for 2020. And I just wanna focus on my writing.' 'Cause I've been developing my writing for decades now. And, oddly, nobody has shows in 2020 (due to the Coronavirus pandemic). And being stuck here in our house in Belize, all I do is write all day. So it's been an awful situation that had a silver lining."

Snider clarified that the aforementioned "writing" is not songwriting.

"I've been writing scripts for decades now, and now I've moved into writing prose," he explained. "I wrote my first novel, which I just finished — a fictional novel. And that's being shopped right now. I just started my second novel. And then I've got a couple of movie scripts I'm working on. I'm gonna be directing a couple of movies that are delayed now because of the whole COVID thing. So I've got a lot of interesting, non-rock and roll projects going on. And the good thing is I get to just sit and focus on them, which is the upside."

As previously reported, guesting on The Five Count, Twisted Sister frontman Dee Snider revealed he will be releasing a new live CD / DVD this summer, recorded during his tour in support of his 2018 solo album, For The Love Of Metal.

Snider: "I actually have a live concert video and album coming out this summer, which may be timely since all the live shows are being canceled. So people can pretend they're at the concert in their living room and rock out to Dee Snider from my world tour last year."