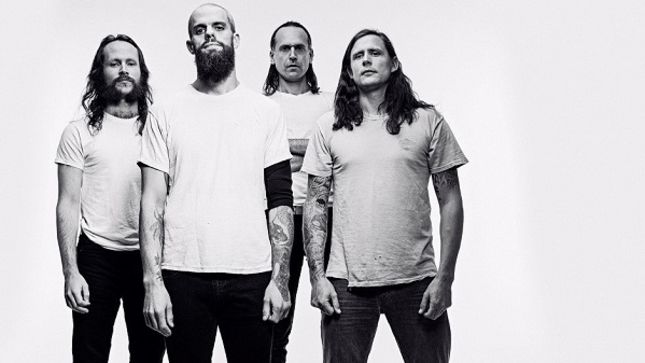 Baroness will release their new album Purple on December 18 via Abraxan Hymns and BraveWords has partnered with the Savannah, GA progressive rockers for the premier of their new song “Chlorine & Wine”. #findpurple

The band comments: “Our new record comes out in a few days. We’d like to take a moment now to recognize and give thanks to some of our friends who helped us transform our new album Purple, from a collection of songs we wrote in a basement in Philadelphia, into something more internally meaningful than we had anticipated. It was not a simple process, and we most definitely could not have created this without the extreme dedication and help from some of our incredibly talented friends. Today we’d like you to meet Marald van Haasteren, an incredibly talented visual artist, who we have the great fortune of calling a true friend. He created all the internal drawings for Purple, and all of the images accompanying our YouTube tracks. There are even some which won’t be revealed until next year, when we have some special occasions to release them . . .”

With the release a few days away, Baroness continues to share behind-the-scenes footage from the making of the ten-song album. The latest clip, titled “Tarbox Aliens” (Making Purple), focuses on the band’s decision to work with producer Dave Fridmann (The Flaming Lips, MGMT).

“We could have gone with a more obvious, heavy producer,” explained drummer Sebastian Thomson, “but that just seems kinda, a little bit boring.”

Pre-order packages for Purple, which feature an instant download of “Chlorine & Wine” as well as a limited edition colored vinyl version of the new album, two picture discs, t-shirts and other unique items are available now at this location. Digital pre-orders, which also include an instant download of “Chlorine & Wine,” are available via iTunes, Amazon and Google Play.

Baroness launched their first US tour in support of the ten-song album with a round of intimate performances on November 27th at the Ace Of Cups in Columbus, Ohio.

“We’ve been off tour for too long,” said John Baizley. “It’s time for Baroness to start playing shows in the US again. We’re doing a short run through the eastern half of the States, in small clubs, getting our new songs stage ready for 2016. Who knows, maybe we’ll even throw in a few songs from the very early EPs and albums. See you soon.”

The band have scheduled the following in-store performances:

Dates for the band’s US tour are listed below: