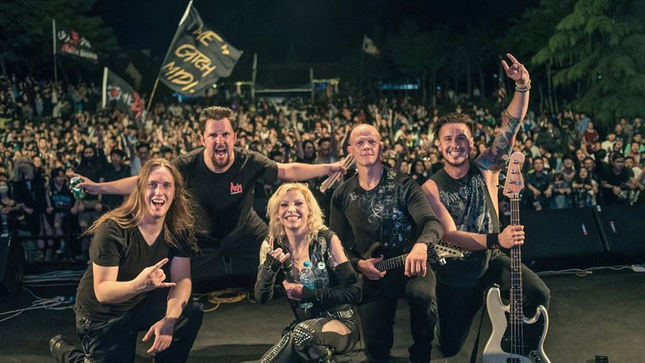 In April 2016, Edmonton, Alberta-based metallers The Order Of Chaos had the distinct opportunity to play the Midi Festival, China's second largest international outdoor music event. It was an experience like no other that the power metal quintet will not soon forget. The sheer energy from the crowd was immense and thrilling for them to play for an audience that is still just beginning to embrace Western music.

The band's new video, "Indoctrination”, was all shot on location during the fest and BraveWords has the exclusive premiere.

The band comments: "Our tour in China last year was an incredible experience. Walking into the midi festival and seeing a veritable ocean of dedicated metal fans ready to lose their mind to our songs was mind blowing. We think this video captures the energy perfectly."

"Indoctrination" is featured on The Order Of Chaos’ latest album, Apocalypse Moon, released via German label Killer Metal Records to follow 2013's Sexwitch EP. The album was recorded/mixed and mastered at the Physics Lab by Terry Paholek in Edmonton and features 12 tracks that showcase the talent and diversity of one of Canada’s up and coming heavy metal bands.

The album features Amanda Kiernan (Into Eternity) on vocals, John Simon Fallon and John Saturley on guitar, Tim Prevost on drums and Duncan Hickerty on bass guitar, who has been replaced by Barrett Klesko of All Else Fails for live performances.