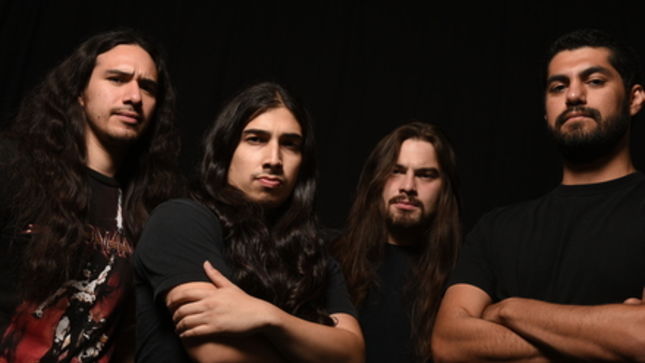 Further cementing their status as one of the forerunners of heavy metal's up-and-coming regime, the neoclassical-influenced extreme shred quartet Exmortus recently finished an epic month-long trek across North America with legendary guitarist Marty Friedman. The band will continue to showcase their style on their sophomore release for Prosthetic Records, Ride Forth.

Scheduled for release in early 2016, Ride Forth was recorded at Sharkbite Studios in Oakland, CA with Zack Ohren (Suffocation, Immolation), who also helmed the band's 2014 label debut, Slave To The Sword.

Continuing with their relentless touring agenda, Exmortus have announced a series of appearances throughout October before they join Enforcer, Warbringer and Cauldron for an extensive winter tour across the US and Canada early next year. The first of their fall appearances will take place at the Metal Before Dishonor Festival in Long Beach this weekend alongside Ohm, Philm, Warbringer and many more. The following week, the group will serve as the house band for the Night Time Show with Stephen Kramer Glickman (Comedy Central, Nickelodeon) comedy show at The Lyric Theater in Los Angeles. Finally, the band will head to Catalyst in Santa Cruz later this month to co-headline A Band of Orcs' annual Orctoberfest.

Full dates and information can be found here.

Exmortus recently premiered a new song, "For The Horde”.

The song is now available for download on Bandcamp, Amazon and iTunes. You can also stream it on Spotify or via the lyric video below:

"For The Horde" is also released as a limited-edition 7”, which features an exclusive cover of Yngwie Malmsteen's "As Above, So Below" as its B-side. Order it now. The artwork, shown above, was contributed by Cyril van der Haegen, who also designed the cover art for the group's sold-out 2013 7”, "Immortality Made Flesh”.