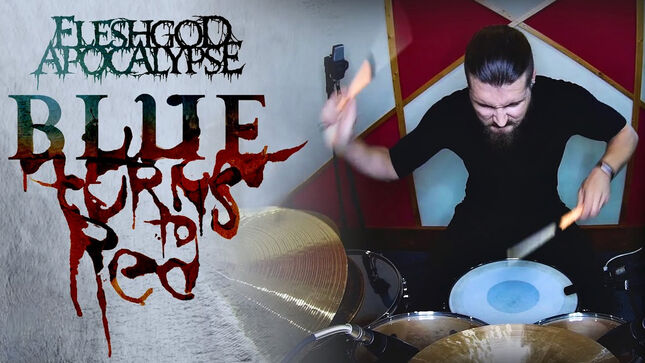 Commenting on the playthrough, Ryabchenko states: "Not gonna lie, I never thought a pop hit could be this challenging on drums. With Fleshgod's signature sound the arrangements took a completely different form. I am pretty sure one way or another it "blue" some people's minds."

Frontman Francesco Paoli adds: "We did this cover as a joke, but tracking it wasn't that funny 😅. Seeing is believing!"

Stream "Blue (Turns To Red)" via the digital platforms found here. Check out the official lyric video below.

Commenting on the single, Fleshgod Apocalypse frontman Francesco Paoli states: "We live in a world where people are searching for easy answers to complex questions. Self-styled gurus, fake news and miracle pills show up on screen as the silver bullet that may cast out all your fears and troubles. If you need shortcuts to dominate the intricate reality we live in, be aware that the outcome might not be what you expect. Will you find a way to save this world on Google? No. Will things change if we don't act? No. Will self-delusions lead us somewhere? No. Can music, and art in general, help us cope with this chaos? Absolutely yes."

Francesco Paoli adds: "This release marks another milestone for our lineup, featuring Veronica, Fabio and Eugene as official band members."

Stream "No" on all digital services, here. Watch the video below: