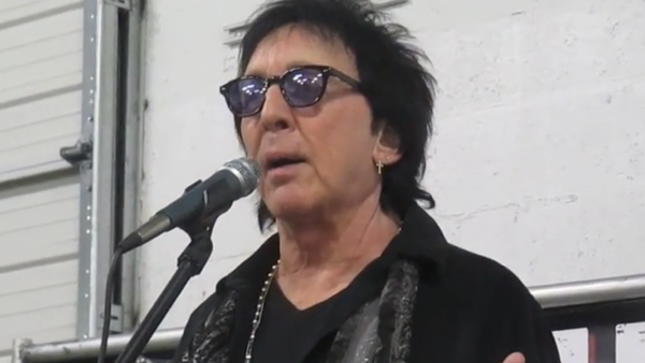 According to a report from App.com, former KISS drummer Peter Criss attended the Beauty Foundation for Cancer Care's 9th annual Beauty Ball, held Saturday, March 14 at the Robert J. Collins Arena on the campus of Brookdale Community College in Lincroft.

"I try to get the awareness to men that we get it," Criss said. "Men don't know. What annoys me is that it's called breast cancer. Bingo, right off the bat, it's breast cancer. Why isn't it called pec cancer?"
"Every year I meet 20 18-year-old boys (who have breast cancer) and they don't know what to do," said Criss, who lives in Wall. "They're embarrassed. It's a chick's disease. Only girls get it."
"My battle is I just want guys to know they can get it, and if they can detect it immediately (they can be cured,)'' Criss said. Early detection "saved my life and I've now become very involved. These lovely girls (of the Beauty Foundation) invite me every year to give out the Peter Criss Man of Courage Award and it's a legacy. I started KISS, but this is really cool; this is important."


Criss took part in a Q&A; hosted by That Metal Show guru Eddie Trunk at the All Things That Rock Expo, at the Philadelphia Expo Center on November 28th, 2014 Check out the fan-filmed video below: