Guitarist JEFF YOUNG Reflects On Time With MEGADETH - “They Weren’t Shooting Heroin When I Was In The Band, They Were Snorting It” 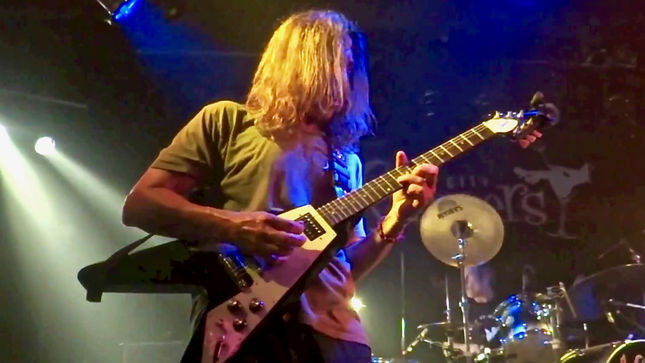 Eonmusic recently conducted an extensive interview with former Megadeth guitarist Jeff Young about his tenure with the band and the recording and touring of 1988's So Far, So Good... So What!. Below are some extracts from the chat.

Q: How did your time in Megadeth come to an end?

Jeff Young: “There’s a lot of disinfo online, and in his [Dave Mustaine’s] book of lies. What happened was, when we were writing the stuff, the cat was freebasing 24/7, and I don’t know if you or the readers have ever been around someone in that state, but they suffer from paranoid delusions. So everything that you’ve heard from that era in the press is coming from that state of mind. The straight up is; I was excited. I had two songs that I’d written, and everyone in the whole camp had heard. It was just a drum machine, and Ellefson put the bass and it was just rhythm guitars, but we had skeletons of songs. I’m actually going to finish one and put it on my instrumental album. I’ll let people which riffs were from that era.”

Q: So how exactly did your exit happen?

Jeff: “I called Mustaine and said I was going to take the demos over. I wanted to be cool and make sure he wasn’t threatened, because someone in that state is already fragile. I said; “Hey Dave, I’m going to come over and play the demos of these two songs. Everybody seems to dig them”. I was trying to be super, ultra, sensitive and I put it as delicately as I could, I said; “Just listen to the stuff. If you feel it’s cool, and you want to flesh it out, work on it, that’s cool. If you don’t, maybe it will work on another album, or I’ll save it for an album sometime down the line, I’ll use it on a solo album. Don’t worry about it man, there’s no pressure”. What I was trying to say was, my feelings aren’t going to be hurt if you don’t want to use the songs. But when he heard me say ‘solo project’, the phone just went dead for a minute, and I was like; “Dave?”, and he goes; “What, so you’re threating you’re going to quit the band and go do a solo album if I don’t use your songs?!” It was that kind of stuff, so at a certain point, I just went and got my equipment.”

Q: Surely you were no angel during that period yourself?

“No, I tried it, I snorted it. They weren’t shooting heroin when I was in the band, they were snorting it. I tried it because Chris Poland and Gar [Samuelson, original Megadeth drummer] were jazz musicians, and Chris looked up to Miles Davis and a lot of these jazz cats, and they wanted to put themselves in that headspace. I don’t know how Chris played like he did being that out of his mind. But he’s a brilliant player, so I snorted some, I tried it. But I don’t have an addictive personality, so I wasn’t down with that stuff. I didn’t smoke pot, I don’t like cocaine, and I didn’t drink before a show. Like, I’ll smoke some ganja now, but back in that era, it just wasn’t what time it was for me.”

Read the full interview at eonmusic.co.uk.