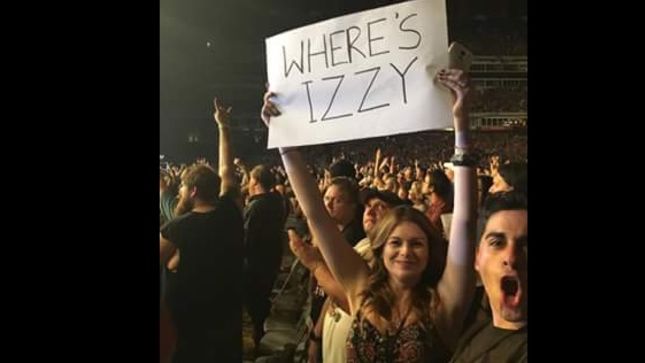 On July 9th, Guns N’ Roses’ Not In This Lifetime Tour rocked Nissan Stadium, Nashville, TN. Well, it rocked everybody except for fan Caroline Campos who had her Where’s Izzy signed ripped up by one of Axl Rose’s security bullies!

Campos writes on Facebook: “Ok so last night I had this Where's Izzy sign. If you know about #‎gunsnroses and you've seen the ‘Don't Cry’ music video, you get it. If not, its a reference to #‎izzystradlin who left the band and is not currently touring with the other four original members.

So when the original drummer #‎stevenadler came out to play his set, I held up my sign with cheers from most of the people in my section. Axl looked at my sign and started laughing and said "That's a good question!" He seemed to appreciate the sign. I put the sign away during actual performances so I wouldn't block the people behind me, only held it up between songs when the lights came on.

About 10 to 15 minutes later, while #‎GnFnR was playing November Rain, our section got swarmed by security AND stage crew (with headsets on). They went row by row asking "Who has the sign?? Who has the Where's Izzy sign?" Most everyone in my section acted like they had no idea. Eventually they made it to the row behind me and saw the sign tucked under my chair. A guy in jeans and a black shirt tapped my shoulder and said "Is that your sign? You need to give it to me." I said "Why? Who are you?" He showed a badge and said "I'm with the band and they've asked for the sign to be removed." I said, "We aren't allowed to have signs?? But I read that.." and he cut me off and said "You can't have THAT sign. Give it to me." I gave it to him and he walked away folding and ripping it up.

To witness all the joys of Axl Rose and Guns N’ Roses on the road, check them out at these dates here.