INTO ETERNITY Guitarist TIM ROTH Gearing Up For Re-Issue Of Debut Album; Playthrough Video For "Silence Through Virtue" Posted 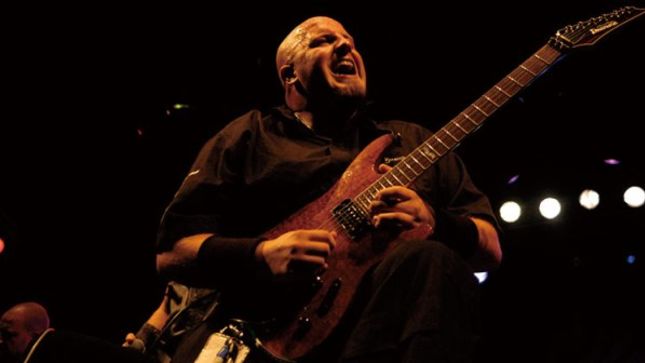 "In 1999, IE won a local battle of the bands and we won $1000 of recording time, so we recorded this song here, 'Silence Through Virtue'. The song got added to our debut album. Now it's getting re-released in a few weeks. I'm pumped M-Theory Audio is releasing the very first IE album on August 14, 2020!"

It might seem hard to fathom in a post-djent era, but once upon a time, it was unthinkable to mix progressive metal and technical death metal, two decidedly distinct sub-genres of heavy metal whose disparate fan bases overlapped little, if at all.

The pioneering “extreme progressive metal” group Into Eternity, however, showed that it was not only possible, but inconceivable that no one had done so sooner. Bridging the gap between Death and Dream Theater, the influential Canadian band - founded by guitarist Tim Roth - paved the way for scores of today's genre-agnostic acts while also introducing one of metal's most celebrated vocalists.

Following the success of the band's acclaimed 2018 comeback album The Sirens,”M-Theory Audio is proud to honour Into Eternity's continued legacy by reissuing two of their most significant albums on August 14. The group's 1999 self-titled debut, originally self-released, has never been properly released in North America until now. In addition to its first-ever LP release - a limited-edition (300 copies) pressing on gray haze colored vinyl - the album will also be issued on CD. Both formats include newly-written liner notes by Roth and two of his former bandmates, as well as three bonus track demos.

Says Roth, “This is a very special release for me personally, and it's a dream come true to finally have it released properly. Originally, we pressed 1000 copies that we sold primarily in Canada, so it's exciting to think that the album will now be available worldwide. Most of these songs were written in my parents' basement. I was only 20 years old when we recorded, and we tried to do the best that we could. A $3000 loan was all it took to get us started. I'd say that was a worthy investment! The demos included as a special bonus are the only Into Eternity recordings that we recorded on 4-track tape. It's awesome to have these old recordings available for everybody in 2020!”

Also available now for pre-order is the first-ever vinyl release of the band's 2008 concept album The Incurable Tragedy, their second recording with dynamic vocalist Stu Block (now in Iced Earth). The record - which also features drummer Steve Bolognese (Ross The Boss, Witherfall, Death Dealer) - was written after three years of nonstop touring that saw the group share the stage with many of metal's A-list acts, including Megadeth, Lamb Of God, Opeth, Dream Theater, Arch Enemy, Overkill and Symphony X. On paper, things couldn't have seemed better - but over a three-month span in late 2006, cancer claimed the lives of Roth's father and two best friends, events which led to the most emotionally charged recording of the band's career. Commemorating its cancer theme, the album will be released on limited-edition (300 copies) lavender-colored vinyl.

“This was the darkest, most difficult record of our career, but looking back 12 years later, it was an important album for us,” Roth says. “At the time, there was incredible personal tragedy happening, which is why the album turned out as dark as it did. Still, I have so many great memories of this lineup touring the world together and playing all over Europe, Asia, Mexico, Canada and the USA. We'd be out touring on a death metal package and then we'd go right into a Hammerfall/Edguy Tour. There were no limits for us at the time. I hope every Into Eternity fan will enjoy revisiting this album.”

True extreme music pioneers, Into Eternity showed the world just how limitless metal could be - and also how glorious it could sound in the process.