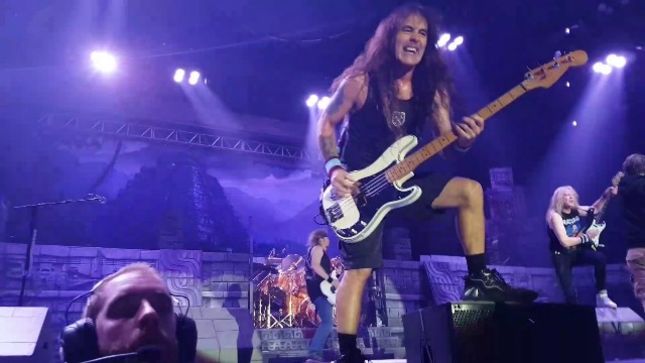 According to The Telegraph, Iron Maiden has been forced to drop its classic "Hallowed Be Thy Name" from the band's current tour after it became embroiled in a legal battle over who wrote it. Retired rock band manager Barry McKay is taking bassist Steve Harris and guitarist Dave Murray to court over the song.

McKay claims the song reproduces major parts of another song, "Lying In My Shadow", written by musician Brian Quinn under the name Brian Ingham.

Iron Maiden comments: "As previously announced, for the current second leg of the Book Of Souls tour a couple of changes to the setlist were due to be made. The first was including a different track from the new album and having been made aware of a legal claim, the second change was to replace 'Hallowed Be Thy Name'."

Phantom Management has issued the following:

“The dispute concerns the song Life’s Shadow, a song originally written in the early 1970s, credited to Robert Barton and Brian Ingham, and recorded by the band Beckett. Steve Harris was a fan of Beckett and some six lines from ‘Life’s Shadow’ were referenced in Steve’s song, ‘Hallowed Be Thy Name’, which was recorded by Iron Maiden and appeared on the album The Number of the Beast which was released in 1982.

As far as Steve is concerned, this matter was settled some years ago by agreement with Robert Barton, but there now appears to be a dispute between the two original writers as to their respective shares in ‘Life’s Shadow’. Further, an individual called Barry McKay in taking this action now claims to publish Robert Barton’s interest in ‘Life’s Shadow’, despite so far being unable to come up with a publishing agreement and showing little or no evidence in his claim of any interest in Mr Barton’s songs in approximately 40 years. Mr. McKay also states that he entered into a publishing agreement with Brian Quinn (aka Ingham) on March 29th, 2017, two days before the claim was served.

Any evidence presented by Mr. McKay will be looked at very closely and a Defence at court will be submitted in due course.”

On April 28th, Iron Maiden performed in at the Festhalle in Frankfurt, Germany. Fan-filmed video from the show is available below. The setlist on the night was as follows:

Encore:
"The Number Of The Beast"
"Blood Brothers"
"Wasted Years"

Iron Maiden’s The Book Of Souls Tour will continue into Germany, UK and Ireland, finishing with two sold-out shows at London’s 02 arena on May 27th and 28th.

The band then flies to the US for an extensive series of arena and amphitheatre shows including dates in Canada, ending with two nights in Brooklyn, New York on July 21st and 22nd.