IRON MAIDEN Guitarist DAVE MURRAY On "Adrenaline Driven" Legacy Of The Beast Shows - "That's How We Were Back Then... We're Just Recreating That Now" 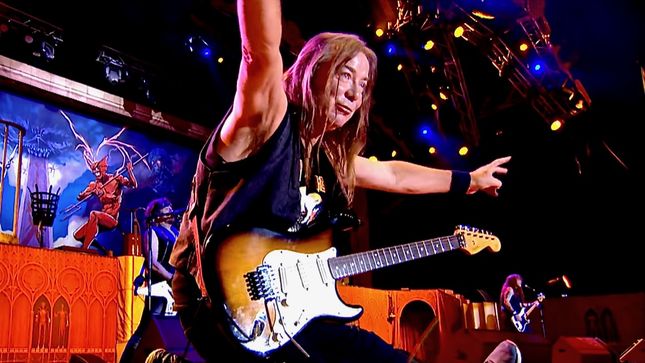 Iron Maiden kicked off their 2019 Legacy Of The Beast tour on July 18, at the BB&T Center in Sunrise, Florida. To commemorate the launch of the North American leg of the tour, Iron Maiden guitarist Dave Murray recently spoke with Forbes about the band’s current production, their early days touring America and the group’s sustained success around the world.

An excerpt from the interview follows...

Forbes: You’ve been in the band for over 40 years. Is it strange or overwhelming to get on stage and run through your entire career in a matter of two hours?

Dave Murray: "We think about it. Obviously, some songs we've done and then you kinda let them go for 20 years. You don't play them or listen to them. When you go back, you’re basically relearning them again. It brings a nice nostalgia and makes you realize the strength of the older material. Maiden has always been about the songs - all the rhythms, melodies and harmonies, we keep as true to the record as we can.

"It's an adrenaline driven show. There are quiet, moody parts in some songs, but it's basically full-on. That's how we were back then. We're just recreating that now."

Iron Maiden are performing not just one, but TWO shows at the Budweiser stage in Toronto on Friday, August 9 and Saturday, August 10. Put on your drinking cap because prior to the band hitting the stage, Iron Maiden’s Trooper Beer and BraveWords are hosting pre-party bashes at the Bovine Sex Club’s Tiki Bar in downtown Toronto from 4Pm to 7PM on both days!

Get there early because there will be lots of prizes and Trooper swag!

For more info visit the event page on Facebook and Trooper beer here.