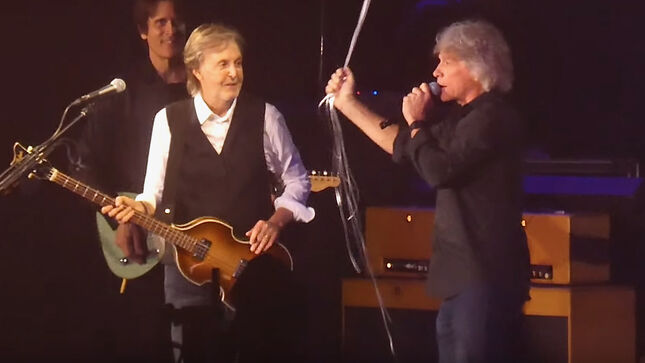 Paul McCartney’s fans got more than they bargained for when local heroes Bruce Springsteen and Jon Bon Jovi joined him on stage in New Jersey Thursday night (June 16), reports Billboard.

Late in the set at Met Life Stadium, Springsteen strolled to the middle to thunderous applause, and took the mic for a performance of his ‘80s hit “Glory Days” and the Beatles’ “I Wanna Be Your Man.” McCartney and Springsteen have collaborated several times over the years, including a performance for Hard Rock Calling 2012 at London’s Hyde Park.

During the encore at East Rutherford, Jon Bon Jovi appeared on stage for sing “Happy Birthday” to his friend McCartney, who turns 80 on Saturday (June 16).

Read more at Billboard, and watch some fan-filmed footage from the concert, below: