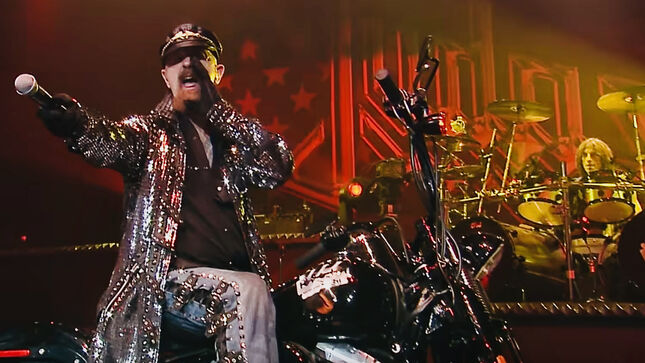 Speaking with Sky.ee, Judas Priest frontman Rob Halford. During the chat, Halford offered his thoughts on touring the world.

That's one of the great, beautiful blessings that I registered many, many years ago; it gave me a better understanding of life, it gave me a better understanding of people, how we're all the same. It doesn't matter what your religion is, what your sexual identity is, what your political beliefs are.  It doesn't matter. We're all people, we all have the same kind of lives on this planet the short time that we're here, and so we must do everything we can to try and get as much out of it."

On May 4th, the Rock & Roll Hall Of Fame announced the 2022 class of inductees, among them, UK metal gods Judas Priest. The induction ceremony is scheduled to take place November 5th at Microsoft Theater in Los Angeles, California.

What does this mean to you on a personal level?

"It’s a validation, more than anything else, of the importance and the relevance of Judas Priest. Fifty years we’ve been doing this. To have this opportunity as we continue to celebrate our 50th anniversary is just a beautiful thing. It couldn’t have happened at a better time.

"That’s it. I guess that’s better than nothing. I’ll tell you what, since you mention those great friends of ours. To be in the company, the prestigious hall of artists, characters, and influencers, all of these wonderful people… it’s the real deal, man. I can’t really describe it in words. I’ve always said that Judas Priest always let the music speak for itself. Words are great. Words are good. Expressions, emotions… but what really matters is sitting in front of your stereo with your headphones on and listening to the music.

I’ll tell you what’s particularly extra sweet is this statement that we’re getting inducted as Musical Excellence. I love that. I didn’t expect that. When you investigate what they mean by that, it’s another great statement about this band and the music we’ve been making for five decades."

They decided to take in you, Les Binks, K. K. Downing, Ian Hill, Dave Holland, Glenn Tipton, and Scott Travis. Did they make the right calls there?

"Absolutely, yes. Absolutely. In terms of ticking the boxes of how long you’ve got to be in, and this, that, and the other, yes. Whoever has been attached and related to Judas Priest has had a role to play. I think the significance of the way they’ve chosen these particular musicians is correct."

A lot of bands play with ex-members at the Hall of Fame. Are you open to performing with K.K. Downing and Les Binks?

"Absolutely. As I said before, you’ve got to push aside anything that gets in the way. You’ve got to remove the emotional clutter and just reference this great celebration. Otherwise, if you don’t do that, and you leave the building, a couple of years later you’ll go, 'What the hell? Why didn’t we do that?' It’s a few hours, but those few hours last forever."