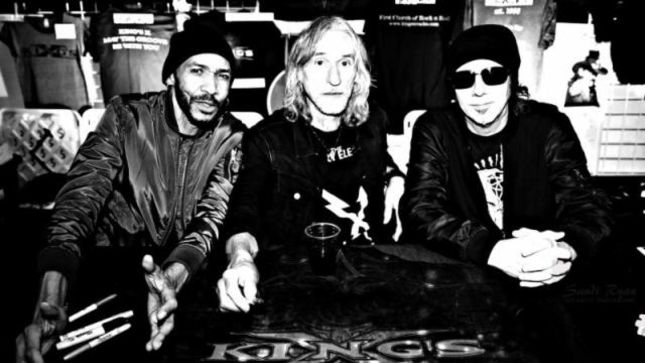 Golden Robot Records announced back in October 2018 that globally revered King's X are now part of their international roster. King's X recently signed a global deal with Golden Robot Records which will see their long-awaited forthcoming new album released worldwide in 2019 via partners in the US, Europe and Japan. It will be the follow-up to XV from 2008.

Speaking with Eddie Trunk for Trunk Nation, King's X revealed they will enter a Los Angeles studio in mid-April to begin recording. According to frontman dUg Pinnick , he has about 30 songs written for the next record. In addition, the trio discuss a band documentary that is currently in the works.

"I'm really excited to release the next King's X album with Mark, Derek and the crew at Golden Robot! May the groove be with us all," says vocalist/bassist dUg Pinnick. Guitarist Ty Tabor adds, "I'm looking forward to working with Golden Robot Records!"


Drummer Jerry Gaskill adds, "It's been a while since we've made a record. During that time, I've been thinking, when and if we make a new record, I want it to be the best we can do. I want to believe in it. I want to make it great, whatever it takes. I don't want to just make another King's X record. I think and hope that we are in that place. I think and hope its time and I feel good about the team we'll be working with at Golden Robot Records. I'm going do my best. Let's do this thing."

"When we started to talk to King's X about signing with Golden Robot in the U.S. and we met dUg in LA a few times, I knew 100% that we would end up working with them. I'm loving the fact they are still the original members and I really believe this new album will be there best yet! It's incredible how many people inside the industry - and I'm talking about very well-known musicians - love these guys and can't wait for a new album. We are all very excited indeed," says Mark Alexander-Erber, Group Founder and President.

"I am delighted to finally be able to work with one the most respected, creative rock bands of the past 30+ years. King's X is not only a superb rock band with an ardent fan base, but are also a 'musician musicians' band. Golden Robot Records is determined to finally help King's X receive the worldwide recognition it fully deserves," says Derek Shulman, Executive Chairman of Worldwide Expansion.