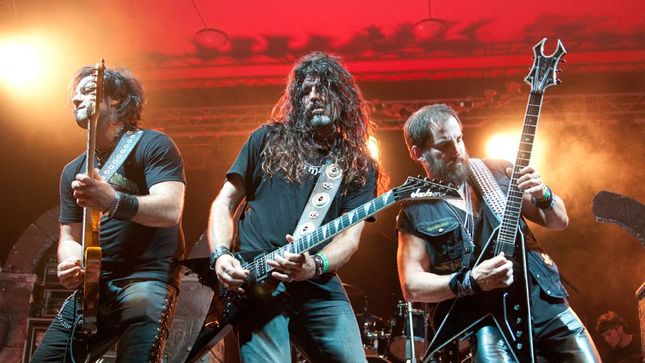 Long-running California-based triple-axe threat Leatherwolf announced last week that an incarnation of the band featuring former guitarists Geoff Gayer and Carey Howe "are well in to the songwriting process of a long awaited LW studio album, " with Wade Black on vocals, Pat Guyton on bass and Dan Bruette  on drums.

BraveWords has just received a statement from the "real" Leatherwolf members Dean Roberts and Michael Olivieri:

"We just wanted to set the record straight regarding a statement/press release that's been put out there announcing a new Leatherwolf studio album featuring former LW members Carey Howe, Geoff Gayer and Wade Black. Whatever Carey, Geoff and Wade are working on - it will NOT be released under the name Leatherwolf!  The legal rights to the name Leatherwolf lie with the line-up featuring original band members Dean Roberts and Michael Olivieri that recently performed on the Monsters of Rock cruise and Keep It True festival in Germany.

It is unfortunate that Carey Howe, the main instigator in all this, is trying to wreak havoc and create the false impression that he, Geoff and Wade are back in Leatherwolf, which is not the case.  He may have succeeded in hijacking the original Leatherwolf Facebook page and YouTube channel but he will not succeed in hijacking the name Leatherwolf as well.

We ask you to please only consult the official Leatherwolf website and Facebook page for any and all news regarding band activities."