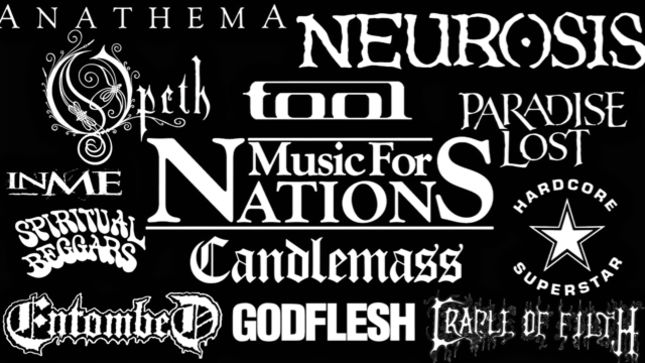 Music For Nations, the legendary British heavy metal label responsible for discovering and releasing records by Metallica, Tool, and Opeth, amongst others, has teamed up with SonyMusic Independent Network (SIN) to become an active front-line label for the first time in more than a decade, and for the first time with a dedicated U.S. presence.

Headed by Julie Weir in the UK and in association with SIN in New York, the label will be signing and releasing new product by new artists while additionally, starting in June 2016 with Opeth and Paradise Lost albums, reissuing and repackaging classic catalog titles.

Ms. Weir's career has included working with artists including Cradle Of Filth, Dimmu Borgir and Bullet for My Valentine; she has also partnered with Sony Music UK in the past on breaking new rock artists including Nothing But Thieves. She also recently played a key role in developing RCA's Bring Me The Horizon who has achieved phenomenal international success.

SIN, a division of Sony Music International, was launched in 2009 by Adam Pollock and Vinny Rich to serve as a United States incubator for Sony's international artists. Headquartered in New York City at RED Distribution, who offer distribution, sales and marketing support for the unit, SIN has released thousands of titles over the years including high-profile projects Kate Miller-Heidke, Karnivool, and Zaz, and has "up-streamed" to Sony's major US labels diverse artists such as Paloma Faith, Kodaline, MØ and, coincidentally although not in conjunction with Ms. Weir, Nothing But Thieves.

UK label manager Joel De'ath exclaims, "We see this as an incredible opportunity for MFN. RED works with some of the most reputable Metal Labels in the world and it's an honor to be part of this legacy. Having SIN as our 'men on the street' in the US ties it all together." SIN's Rich concurred, "We hope and expect that the union of MFN, RED, and SIN will breathe new life to this hell-raising music. We're excited to be a part of a new chapter in MFN's history."

Initial MFN US releases will be two classic reissues; Opeth's triple LP live album, Lamentations, recorded live in 2003 soon after the release of the band's classic Deliverance and Damnation albums, and Paradise Lost's genre-defining classic, Shades Of God, coming for the first time on picture disc.

As well as the forthcoming physical releases, the Music for Nations catalogue is available on digital and streaming services, including classics from Opeth, Cradle Of Filth, Paradise Lost and Anathema.

For more information on Music For Nations, visit this location.