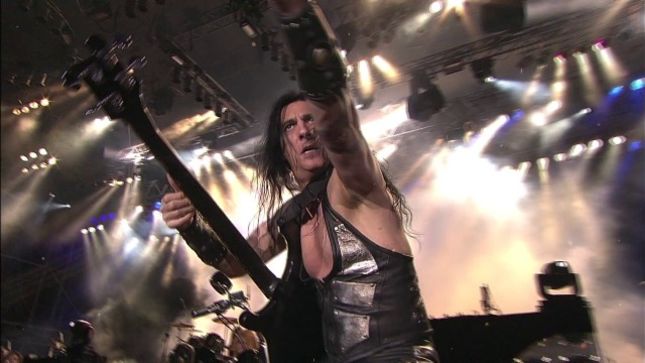 Manowar is celebrating their 40th anniversary with an early moment in the band's history. The clips below features extracts of an interview with bassist Joey DeMaio on the Rock Radio Network in the US, aired in November 1983.

Manowar have released a sneak peek at their upcoming new Blu-ray, DVD And Digital release, The Final Battle, coming soon. Watch below.

In the spring of 2020, Manowar played their long-awaited first ever concert in Mexico, headlining Hell & Heaven Fest 2020. This historic event was recorded in highest definition, with over 15 8k and 4k cameras, a drone and immersive audio set up and will soon be released on Blu-ray, DVD and digital platforms.

Manowar will return to Spain as the headliners for Rock Fest Barcelona, on Thursday, July 1, 2021. This will be the band's only concert in Spain next year.

Manowar will celebrate its 40th anniversary with the largest production they've ever brought to Spain, with epic sets, impressive visuals, Viking figures and a powerful setlist full of their immortal classics.

"We can't wait to go back to Spain," says Joey DeMaio. "Our Spanish fans always fought for Manowar and true metal. We have never failed, and we will never fail big fans in Spain. Our motto is LOUDER HARDER BIGGER - STRONGER - this says it all!!"

In 1980 a new band exploded on the metal scene that would change the world of music and create history; with songs that have become battle hymns, with a sound like no other, and a passion and determination that has defied any obstacles since. Their name: Manowar.

Now, 40 years later, these founders and defenders of the true metal movement have the most loyal army of followers that continues to grow bigger and stronger than ever; and these fans from all over the world have demanded more. Manowar have heard the call of their devoted Army Of Immortals and will return with their 40th Anniversary Tour.

Scheduled for April 2021, Manowar will first return to Germany, the land of true metal, and for the first time in many years to The Netherlands. 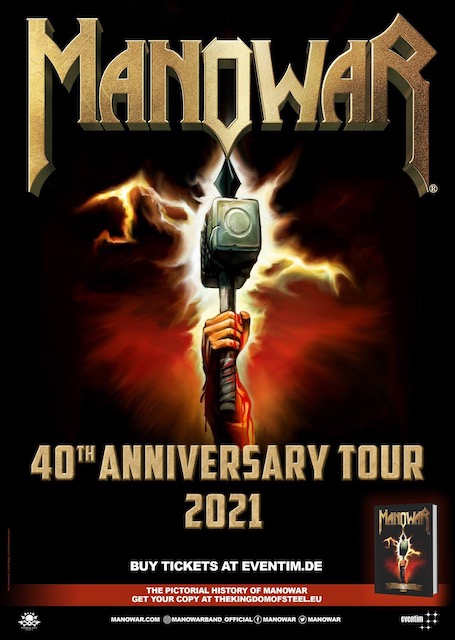 “All of us, everywhere in the world, are living in a very challenging time right now” said Joey DeMaio. “But we will get through this, standing together, stronger than ever! Music is a universal power! It guides us through tough times and unites us! And when it is time to celebrate again, we will raise our hands in victory, with the greatest fans in the world!”

The 40th Anniversary Tour 2021 will be a celebration of everything metal fans love about Manowar: Songs that unite and inspire, epic imagery, outstanding sound and a gathering of like-minded friends under the Sign Of The Hammer.

For tour details and ticket links go to Manowar.com/tour.