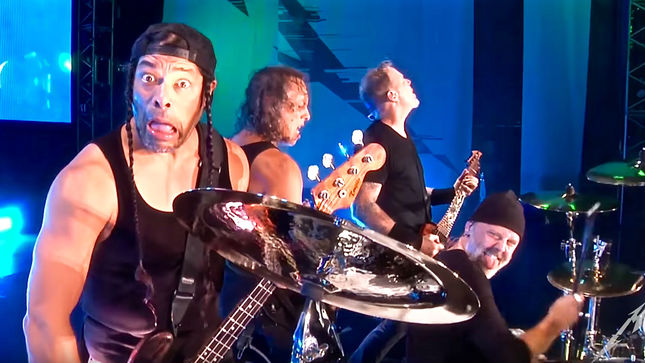 MetallicaTV have uploaded pro-shot footage of Metallica performing “Master Of Puppets” on November 3rd in Guatemala City, Guatemala. Watch below:

Check out Tuning Room footage from Guatemala City below:

Previously posted footage of Metallica performing “The Memory Remains” on November 1st in Bogotá, Colombia can be seen below:

Metallica’s intimate live performance this Friday, November 18th at House Of Vans in London will be streamed live online.

Says the band: “It’s almost here... a new Metallica record finally hits the streets this Friday, November 18! To celebrate we’ll be playing live at the very intimate House Of Vans in London for Fifth Members and lucky winners of the Vans ticket contest. We hit the stage at 9 PM, GMT that night and we want you to be a part of the madness as the show will stream live!!

“Grab your favourite beverage, your Metalli-friends and settle in to be a part of the festivities by hitting Metallica.com or YouTube. If you’re busy that night, no worries - the entire show will be available on demand in its entirety for seven days after the event.

“Eight years in the making and Hardwired…To Self-Destruct is almost here. Celebrate around the world with us through the magic of the internet. See you there!”

To celebrate the holidays and their new album, Hardwired...To Self-Destruct, Metallica have announced a special Oakland show. A band statement follows:

"In the last two months, we’ve been to New York City, Latin America and Europe so it’s about time we plan some festivities to celebrate the release of Hardwired…To Self-Destruct right at home in the Bay Area! And what better way to wind down the year than a special Fifth Members show in our own backyard at the historic Fox Theater in Oakland, CA as we hit the stage there on December 17th for the last time in 2016... it promises to be quite the party!

“If you would like to join us and you’re a Fifth Member, click here to enter to win an opportunity to purchase up to two tickets per member in a special pre-sale that begins on Thursday, November 17th at 10:00 AM. Fifth Member tickets will be specially priced at $25 each and all the proceeds will be donated to the Alameda County Community Food Bank. Winners will be e-mailed a personal code on November 16th along with more details about how to purchase tickets to the exclusive one-of-a-kind show.

“If you’re not a Fifth Member, you’ll still have a chance to purchase up to two tickets per person on Friday, November 18th at 10:00 AM PST at Ticketmaster.com for a price of $100 each, again with all proceeds donated to the Alameda County Community Food Bank. Everyone who comes to the show is encouraged to celebrate the spirit of holidays by bringing a donation of canned goods to the venue that night and we’ll have collection bins by all the entrances.

Take a break from the shopping and merriment to spread some holiday cheer with us in Oakland!!"

Metallica is due to play Beijing, China for the first time ever on January 18th. Tickets will be available on November 17th starting at 2 PM through the ticketing hotline 400-610-3721 and online via Damai.cn.

Metallica will celebrate the release of Hardwired...To Self-Destruct with fans and independent record stores around the world as part of Blackened Friday.

Starting on Thursday November 17th, 100 independent record stores will open at midnight to sell the new album. Stores will be stocked with music, prizes and additional limited edition exclusive items to give away free with purchase. On Friday the 18th during their normal business hours, stores around the world will be hosting Blackened Friday events with music and giveaways of limited edition items. All items available while supplies last. Contact your local store for details.

For more information on Blackened Friday, visit here and follow along at #BlackenedFriday.

Hardwired...To Self-Destruct is due for release on the band's own Blackened Recordings on November 18th and is their first studio album since 2008's multi-platinum Death Magnetic. The album was produced by Greg Fidelman, who engineered and mixed Death Magnetic, and is available for pre-order at Metallica.com in various configurations including: CD, Vinyl, Digital, Deluxe, and Deluxe Deluxe Versions.