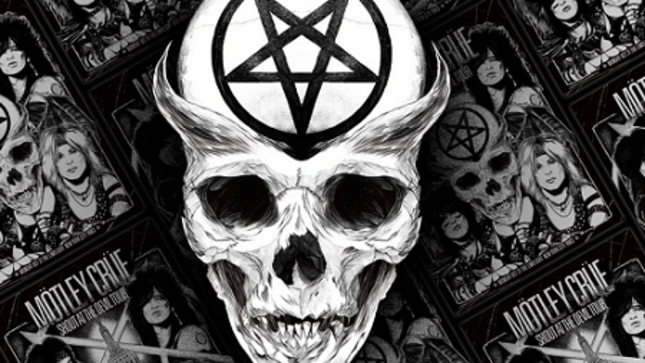 Mötley Crüe’s Halloween ’83 classic Limited Edition concert posters have just been released in a Limited Silver Foil Variant of 100, and a Main Edition limited to 200 only, via Iconic By Collectionzz. Don’t miss out! Click here to grab yours.

Back by very popular demand, Iconic By Collectionzz is releasing two new posters for the World's Most Notorious Rock Band, Mötley Crüe! This time around, they're commemorating the band's debut in New York City on Halloween 1983.

On October 31, 1983, Mötley Crüe was riding high on the release of their breakthrough commercial success Shout At The Devil, and about to make their New York City debut at one of the city's hottest and newest music venues, The Limelight. For those not familiar, the club was a deconsecrated Gothic Revival church with ornate stained glass windows on the corner of Sixth Avenue and 20th Street in Chelsea. That's right, Mötley Crüe made their New York City debut... in a former church... on Halloween!

One poster design wasn't enough for such an epic gig, so Iconic By Collectionzz asked artist Wildner Lima to create two designs. The Main Edition is all about Shout At The Devil, with a demonic winged skull and pentagram front and center surrounded by the band clad in their black leather. The Foil Variant is our homage to the City of New York, featuring the iconic Empire State Building which glistens on a mirror foil paper.

On that night, Mötley Crüe found themselves in the City that never sleeps, kings of the hill, top of the heap! Grab one of the posters at this location while supplies last!

Each poster is officially licensed, measuring 24" x 18", hand-numbered, with a holographic sticker on the back for authenticity.